As you may know, I've been caring for my 87-year-old mother in recent months. And I've also been looking after the garden, though it has to take second place to Mum's needs. At the moment the garden is a garish clash of bright colour, interspersed with rather more weeds than you might guess from the photos below. It would be nice to say that I've intentionally selected these showy plants with regard for my mother's failing eyesight. But alas that is not the case; it just kinda happened that way..... 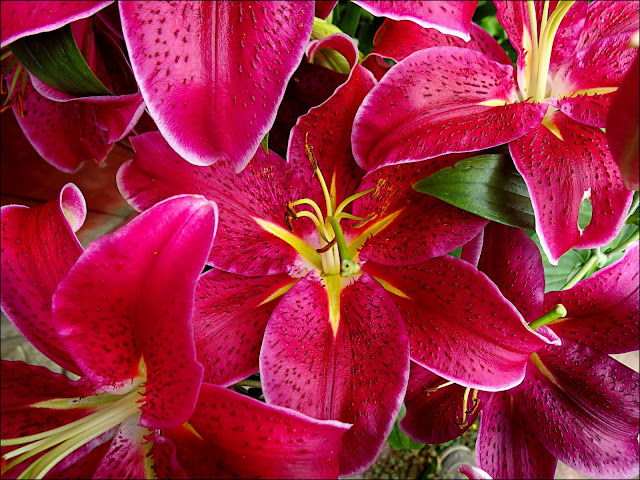 These lovely lilies were grown by my brother Les. They grow in pots either side of the garden shed, beautifying the rather shabby woodwork for a few days each year. 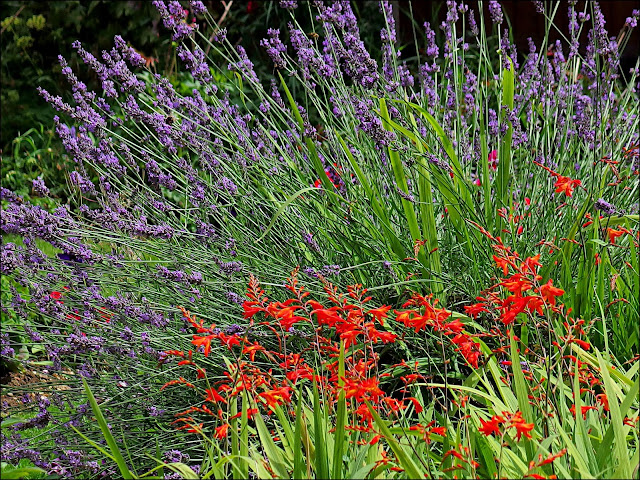 Montbretia and Lavender growing together and setting up a dazzling colour-contrast. The Montbretia corms came originally from the house the family lived in over fifty years ago. Apart from being dug up and moved about the garden they've had no special care for all that time. Insinuating themselves amongst the lavender was entirely their own idea. 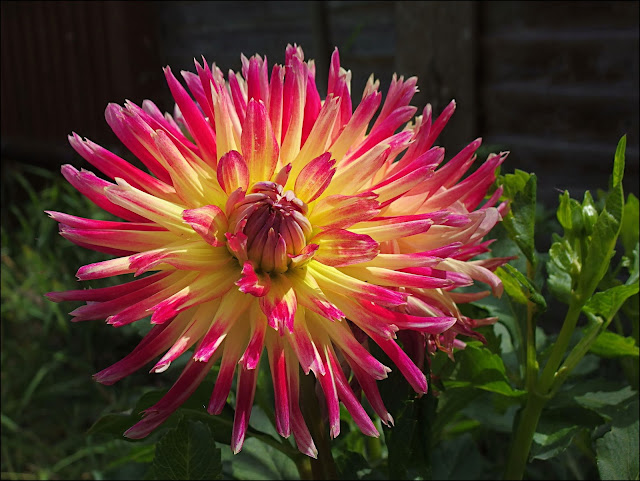 Dahlias: a burst of Mexican sunshine in the English garden. 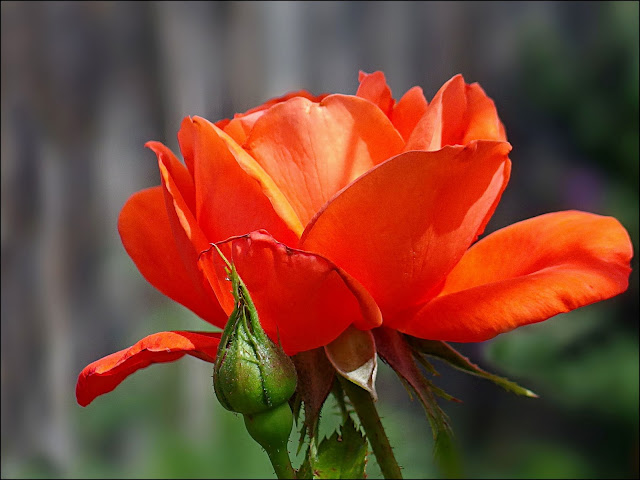 The Alexander Rose, bought by my father when our good friends and neighbours became the proud parents of baby Alex. The bush has grown rather tall and leggy over time, as indeed has young Alex who recently qualified as a doctor. 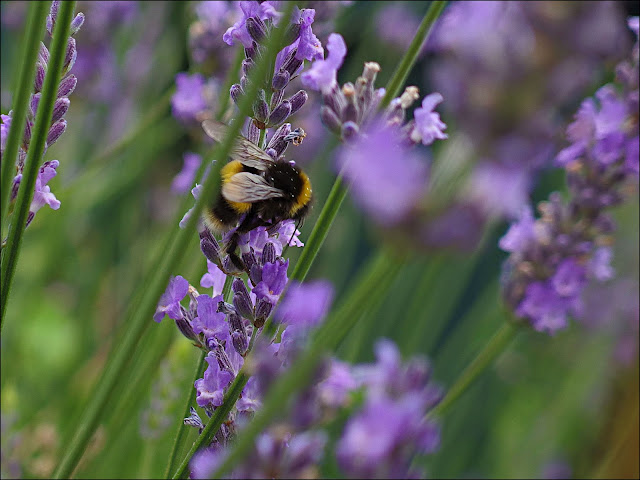 There's a large lavender plant whose scent makes an evening wander in the garden so addictive at this time of year. The bees are rather fond of it too. 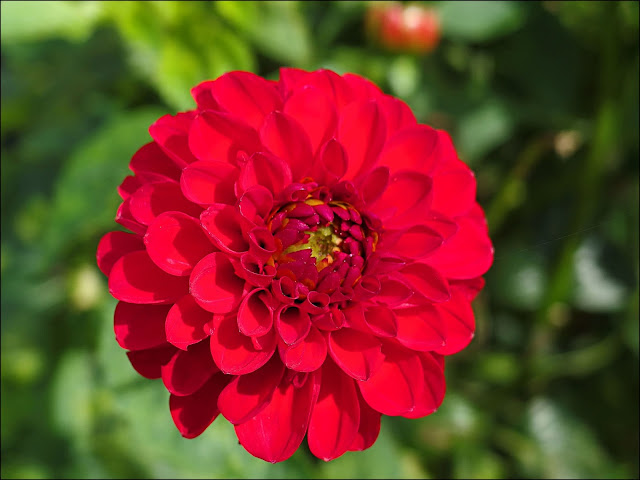 My mother's favourite "pom-pom" dahlias are yet to really come to their peak and there are just a few blooms on them at present. 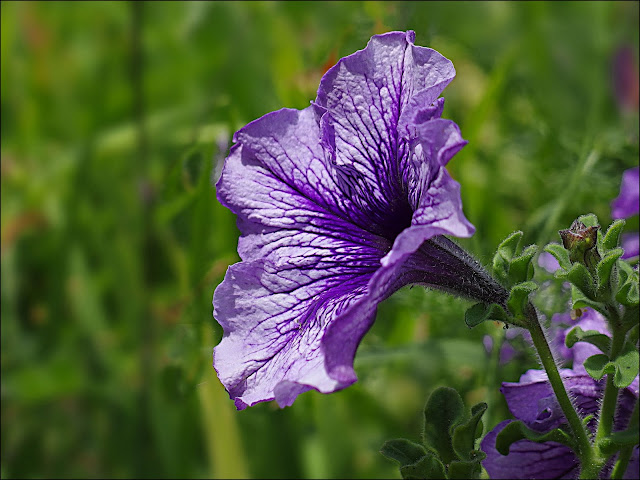 I've always been secretly fond of Petunias. If you can forget that they usually inhabit hanging baskets outside pubs and seaside hotels then you can start to appreciate them as cheerful flowers which go on blooming for most of the summer - if you remember to dead-head them regularly. 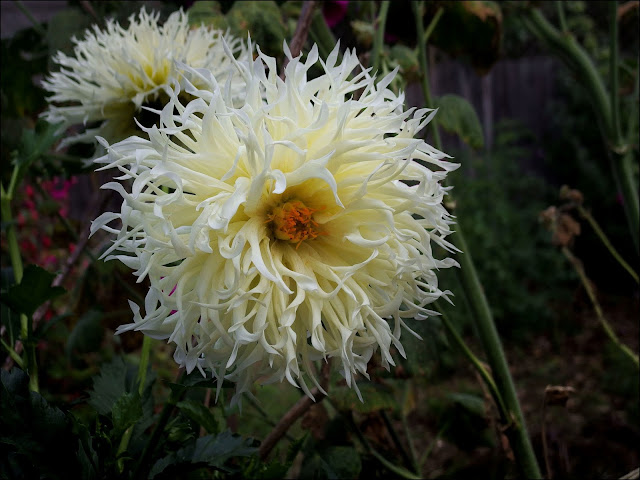 I've had this Dahlia for a few years now but the flower-heads have never had such a ragged, unkempt appearance as they have this year. Its bedraggled, early morning look makes me smile every time I see it. 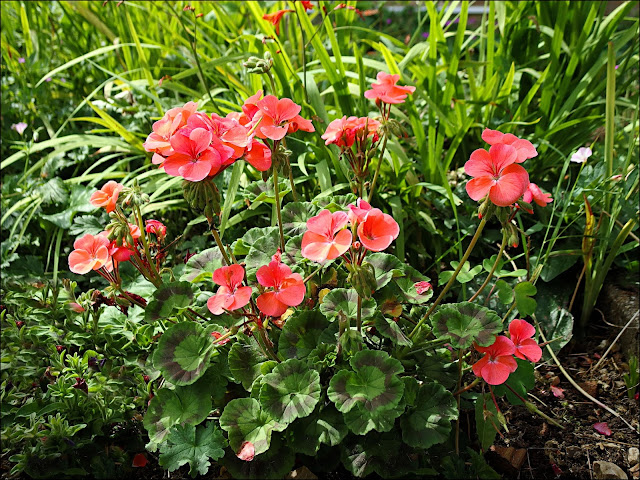 Salmon-pink Pelargoniums. Recently our winters have been so mild that some of these have survived the winter outdoors, having been forgotten about the previous autumn. 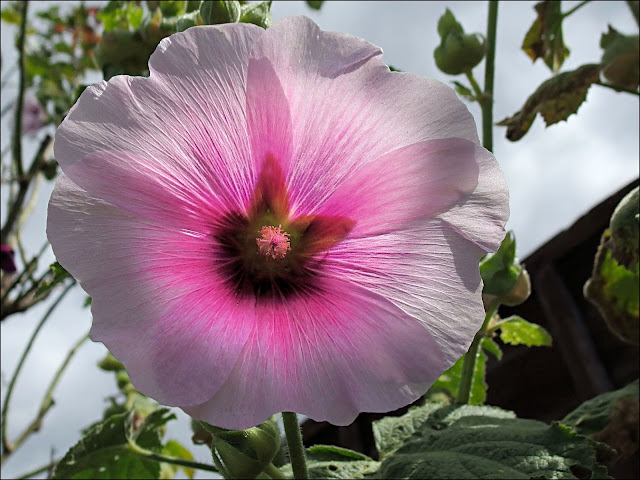 About forty years ago my mother took it into her head that the garden needed some Hollyhocks and badgered my father relentlessly to grow some. Dad said very little about it and the idea was forgotten - till the next summer. Then Mum began the campaign again and eventually returned home with some seed. Father led her patiently into the garden and pointed out the big clusters of green leaves that were just beginning to send up their first flower spikes - the Hollyhocks he'd been growing since she first mentioned them! 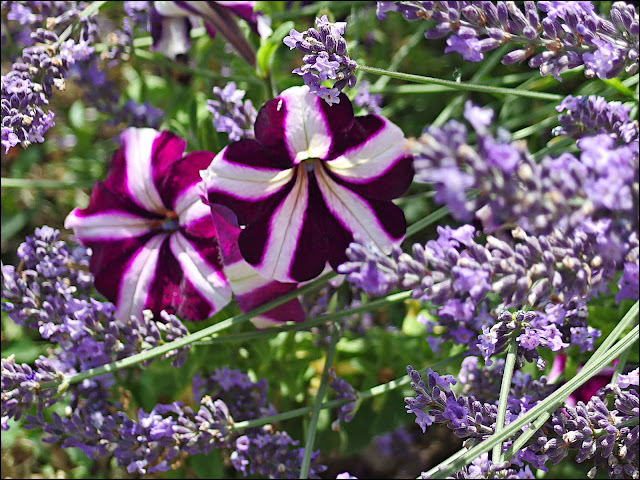 Lavender and Petunias getting mixed up; I always underestimate just how far about the Lavender will spread itself. 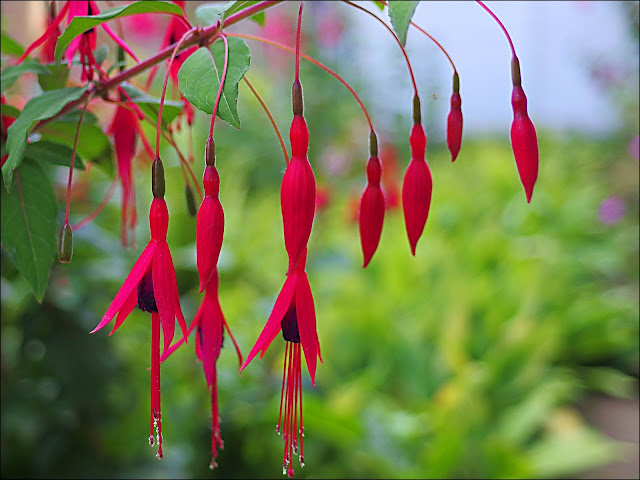 My brother had a spell of huge enthusiasm for hardy Fuchsias and grew several different varieties. So many in fact that they rather outgrew his own little plot and stated to take over my parents garden too. And the delicate little ballerinas above are some of the survivors from that time. They're a lot tougher than they look! 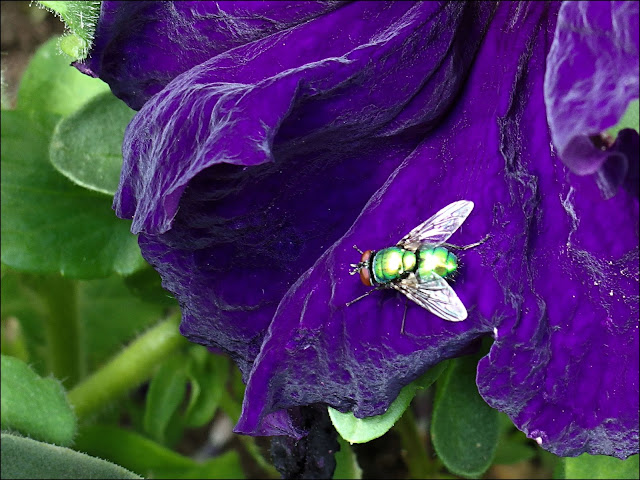 It's always nice to see some insects in the garden, even common Greenbottles, seen here to advantage on the rich purple, velvety petals of this Petunia. 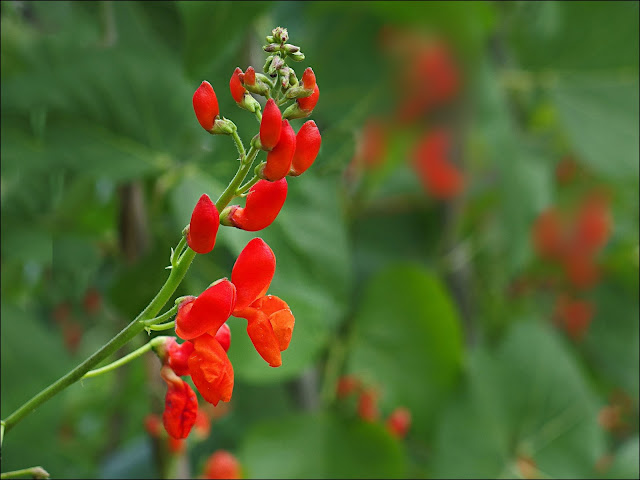 And finally some Runner Bean flowers in the vegetable garden. I understand that people grew these for their flowers at one time, long before anyone thought about eating them.

Posted by John "By Stargoose And Hanglands" at 13:46