Churchyards - Matters Of Death And Immortality

We often visit old churches as we trundle about the English countryside on this blog. But, other than the odd picture of a particularly grand or unusual gravestone, I don't seem to have mentioned much about the churchyards in which they stand. So here goes..... 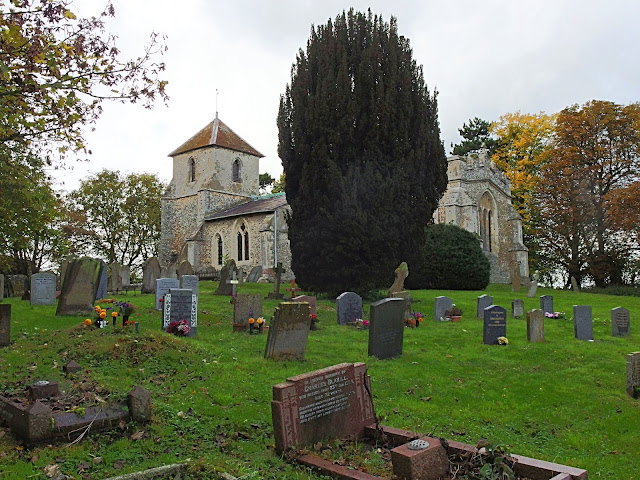 Although almost all our villages date back to way before the Domesday Book, archaeological evidence has shown that many settlements have moved around over the years, so that the modern village may not always be in exactly the same place as its Medieval or Saxon equivalent, and it's quite possible that there'll be a Roman or even prehistoric settlement discovered somewhere else in the neighbouring fields. A village might first form around a spring, but later a road might be built nearby and gradually more and more houses are built near the road to take advantage of passing trade till the original settlement becomes deserted. But it probably still has the same name - and it probably still has the same church. Which is why some churches now stand out in the fields, away from the houses. 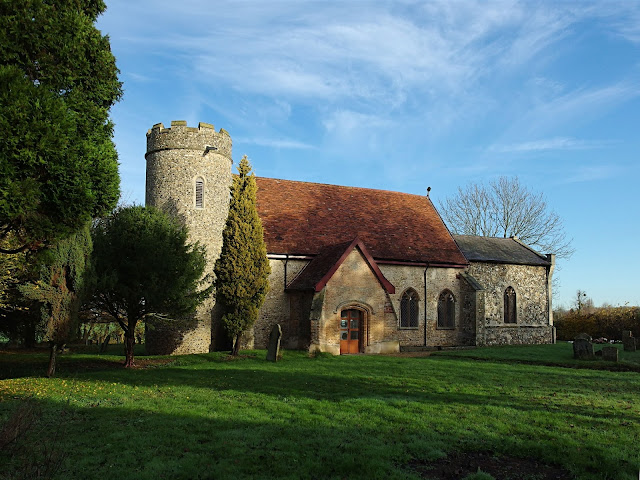 Some of the churches we've seen date back 1,000 years, but before that there was probably an earlier church on the same site, and before that quite possibly a pre-Christian gathering place and maybe even some sort of burial mound. In fact we may have been burying our dead in the same plot for well over two millennia. When, as in the two churches I've shown you above, the village is small and the churchyard is large there's been no real problem. But sometimes things get mighty crowded.... 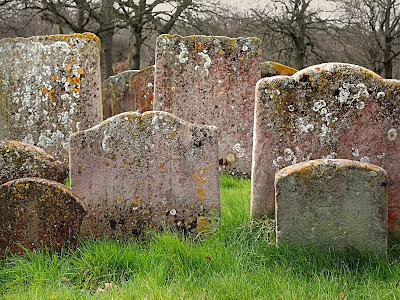 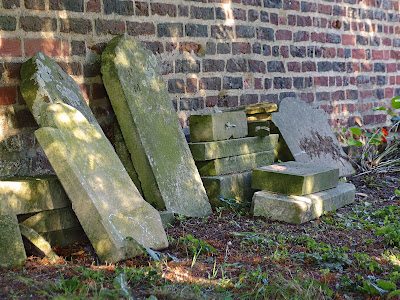 So it's not at all unusual to find headstones stacked against the churchyard wall where old graves have been dug up to allow a new burial. 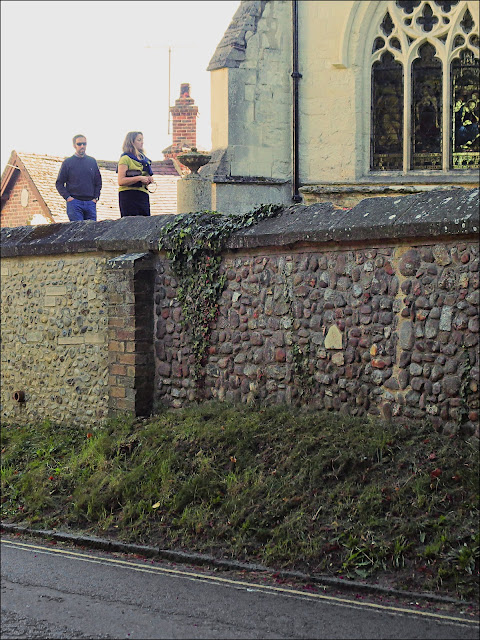 I suppose I could tell you that the graveyard in Grantchester, which is pictured above, has become crowded because everyone in the village has exceedingly long legs, but actually those are normal people walking on ground that has built up over the centuries because of the interment of so many corpses and coffins. (Don't tell them; it'll ruin their afternoon - the strolling couple I mean, not the corpses!). Maintaining that retaining wall costs the village a small fortune. 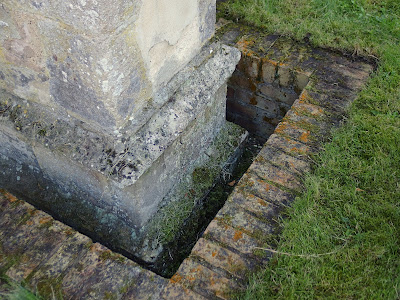 Around the church you can see where the original foundations of the church were at a lower level. 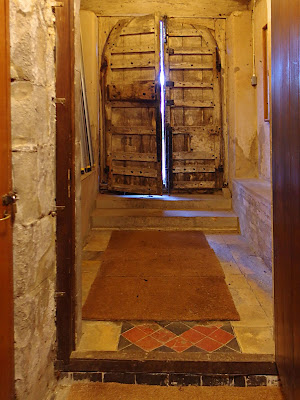 And as you go inside you'll find a series of steps which lead you down to the level of the church floor. You probably wouldn't notice unless, like I was recently, you were pushing someone in a wheelchair when they becomes a formidable obstacle - though there are some ramps stowed to the left of the door. 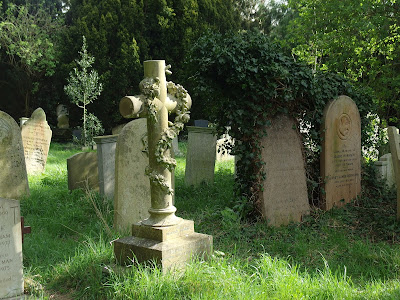 In urban areas the overcrowding of graveyards became a real problem as the towns grew in size. Bones were often unearthed by the gravediggers and were stored in boneyards. In Paris whole graveyards were excavated and the bones removed to catacombs because the stench, the pollution of the water supply and resultant health hazard had become intolerable. Many towns created new cemeteries outside the built up areas, though frequently the town spread out and soon enclosed them. 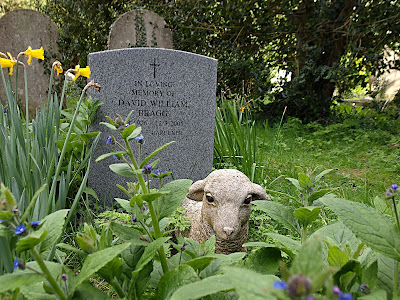 In fact the smell from graveyards was always a problem even in rural locations and is probably why we started to put flowers on graves. A good big stone slab was also a good investment if you didn't want the corpse to be dug up by dogs or foxes. The wealthy paid extra for their loved ones to be buried inside the church and, when that was stopped because of the stink inside the building, they invested in mausoleums in the churchyards. 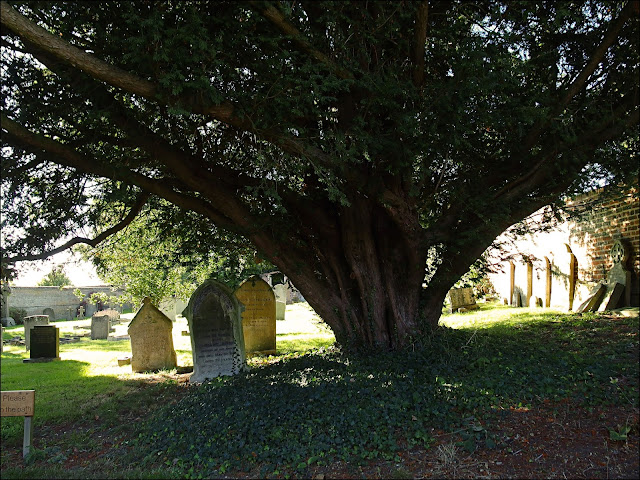 Enough of death and decay! Lets talk about something as near to immortal as is possible in this world.

Just about every churchyard you explore has at least one yew tree. Some of these are very old indeed and just a few are reckoned to have been here longer than Christianity. One in St Cynog’s churchyard at Defynnog, near Sennybridge in Wales, has been dated at 5,000 years old! Plenty of people will tell you that the yew is grown in churchyards as a symbol of immortality, either Christian or pagan. And there may be some truth in what they say but.... 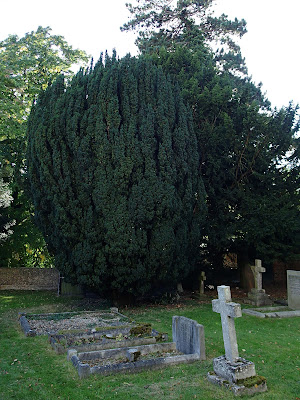 There's another reason why every village had to have a supply of yew wood and that was nothing less than the defence of the nation. For yew was the wood of choice for making longbows. The sapwood springs back from having been stretched, ideal for the outside of the curve of the bow, while the heartwood springs back from being compressed, ideal for the inside of the bow's curve. Bow-makers have known this for a long time and remains of bows from the neolithic show that they were made in this way too.

But why in the churchyard? Well, because yew is also poisonous, so was grown in the only place where farm animals could not browse upon them.

Posted by John "By Stargoose And Hanglands" at 15:48