On The Prowl In Wolferton

We recently had a look at Dersingham Bog Nature Reserve and popped in to the Royal Railway Station at Wolferton, which is just next door to the Bog. The next post was going to be Wolferton itself but somehow I digressed to other things and the photos of the village remained unpublished. 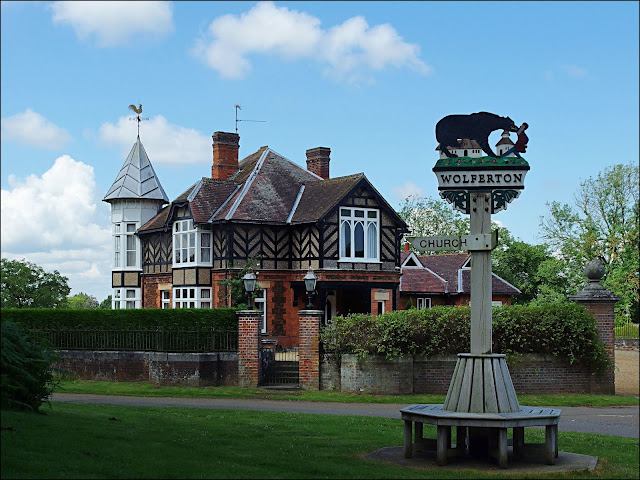 I didn't take that many pictures, because Wolferton is not a very big place. The first house you see as you enter the village is of rather spooky Gothic design and the sign depicts someone being attacked by a wolf which is the size of an average horse! I expect there's a local legend explaining how the place got its name, but probably the story post-dates the actual name by several centuries. 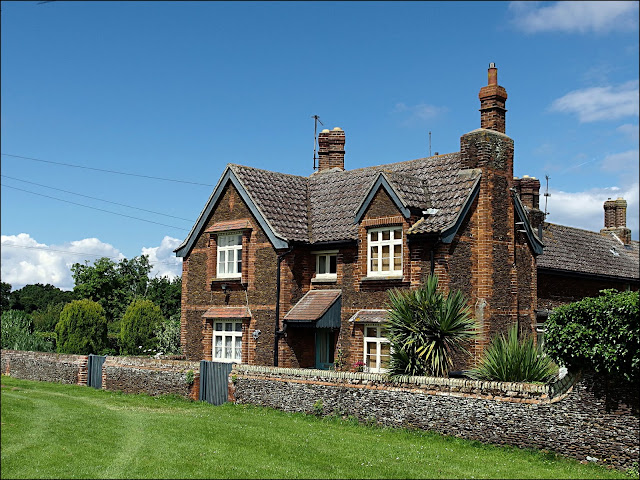 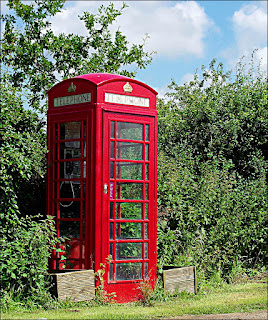 The houses are all very neat, tidy and well-maintained, for this is an estate village, serving the royal estate at Sandringham. It has a social club but no pub, shop or school. It does however have a horse-racing stud farm and that rarest of all survivals - a working telephone kiosk! And one with planters for flowers too. 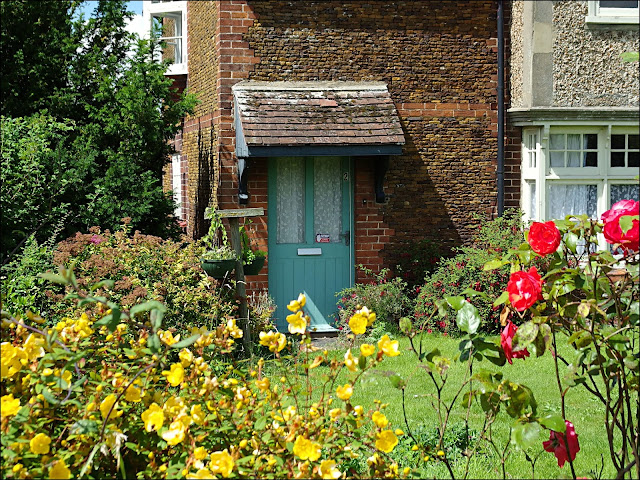 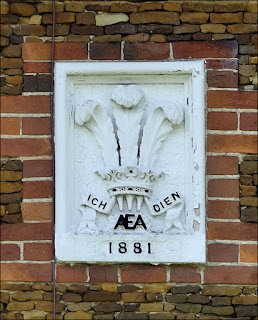 We are situated on the outcrop of that distinctive rock known as carrstone, a type of iron-rich sandstone with all the appearance of gingerbread. It's not great as a building stone but it's nevertheless much-used wherever it occurs, in a belt running southwards fro Hunstanton cliffs; local builders everywhere used whatever materials were close to hand.

In order to make decent corners red brick was often utilised; the "almost-but-not-quite-matching" tones of the two building materials causing outrage to the aesthetic sensibilities of some folks, including the landscape writer Jacquetta Hawkes. Personally I wouldn't have found anything jarring in the juxta-position if I hadn't had it pointed out to me.

The Prince Of Wales's feathers are featured on the wall of this house, so presumably he had it built for his estate workers. The AEA stands for Albert Edward (he became King Edward VII on the death of his mother, Queen Victoria) and his wife, Alexandra of Denmark. 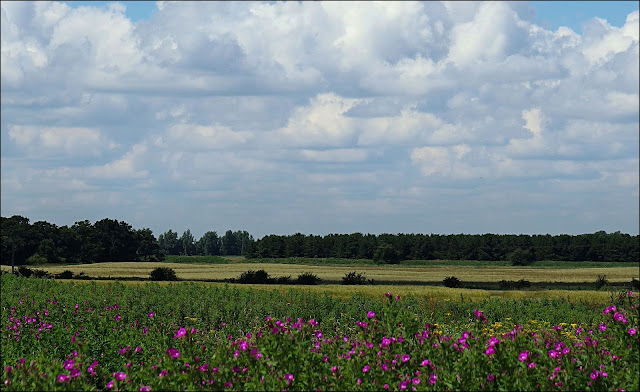 The road to Wolferton leads nowhere else, it just loops around and comes back on itself. At the furthest extremity of the loop are views out towards The Wash which would excite any members of the Flat Earth Society! 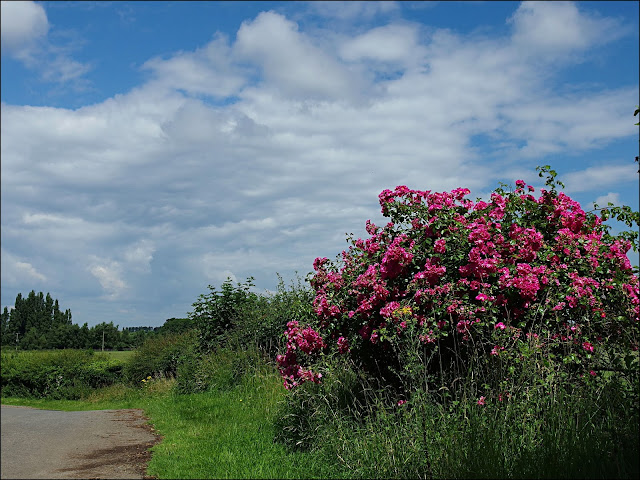 Looping around past hedgerows thick with roses... 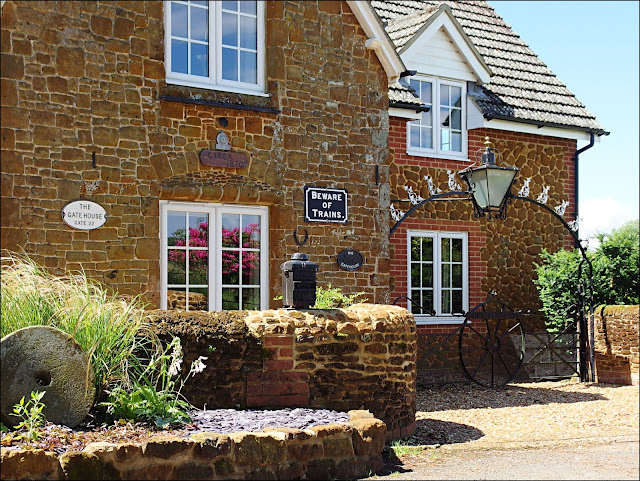 ....we come to the old level-crossing house where the Kings Lynn to Hunstanton branch line crossed the road just prior to arriving at the Royal Station. 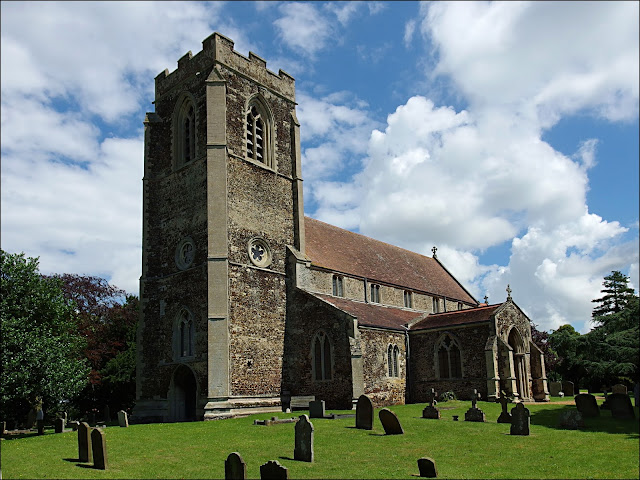 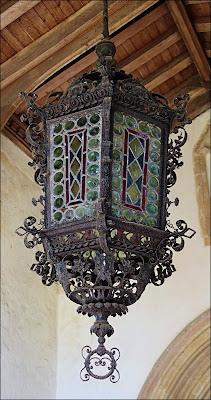 Tucked away down this corner of the village is the parish church which, though by no means huge, is bigger than might be expected in what is no more than a straggle of houses on a road to nowhere.

A man was tending the graveyard when I arrived and I sat on a wall watching incredulously as he managed to balance all his tools, including a power strimmer, on his bicycle before pedalling off down the lane.

Inside, the church seems to have been little influenced by the royal connection, but harks back to an earlier time, before Queen Victoria purchased Sandringham for her dashing son. Though perhaps this Germanic-looking light-fitting in the porch has a whiff of the Saxe Coburgs about it. 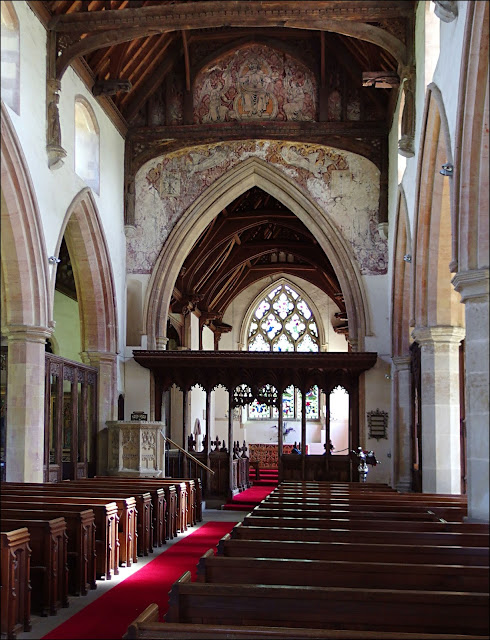 It's a nice enough church inside and there's what looks at first glance to be a medieval "doom" painting on the chancel arch. It may well once have been, but it rather looks as though some well-meaning soul has had a go at re-painting it, not done a very good job, and walked off without finishing it. 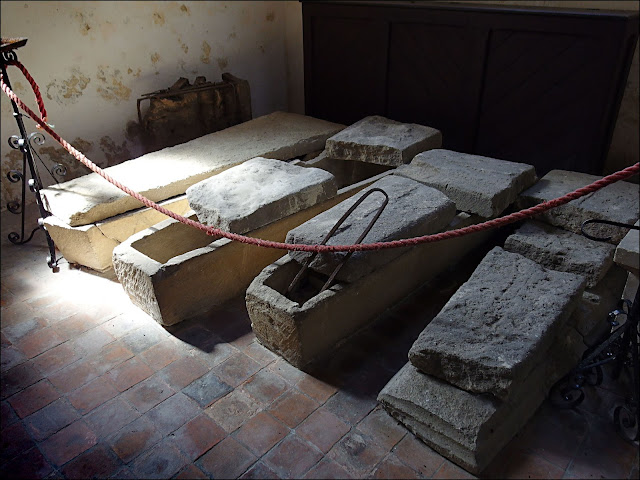 We always like a touch of the ghoulish and here are displayed some Early English stone coffins, perhaps from the 12th or 13th century. 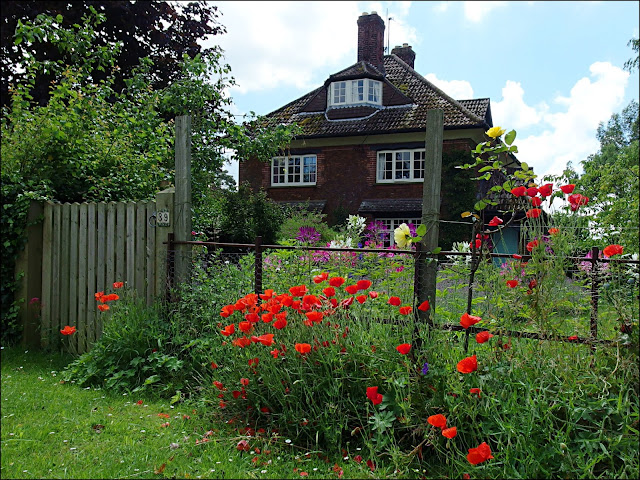 Out once more into the sunshine and flowers: life continuing in this isolated corner of Norfolk.

Posted by John "By Stargoose And Hanglands" at 11:46