It's Sunday, so lets visit a church. In this case St Botolph's Church in Cambridge. Saint who? St Botolph - though if you talk to some Cambridge folk you might hear St Bottle's. And the little lane next to it is sometimes called Bottle Lane, rather than Botolph Lane. 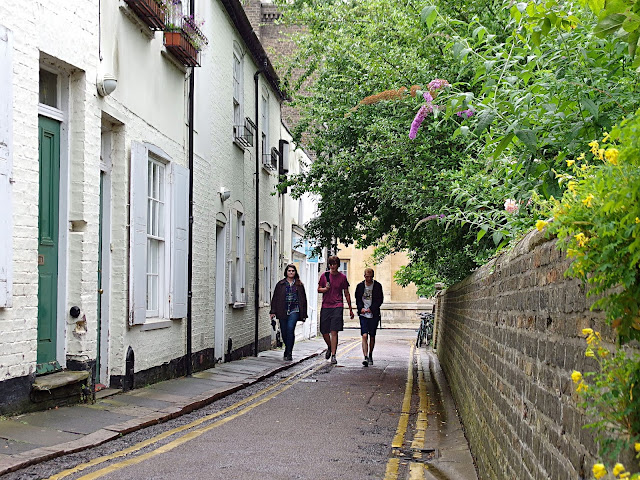 And in that little lane stand some interesting old buildings, including No 12, which in the nineteenth century was The Bell, a pub run by Mr Samuel Bowtell in the 1830s, a well-known cricketer in the town. 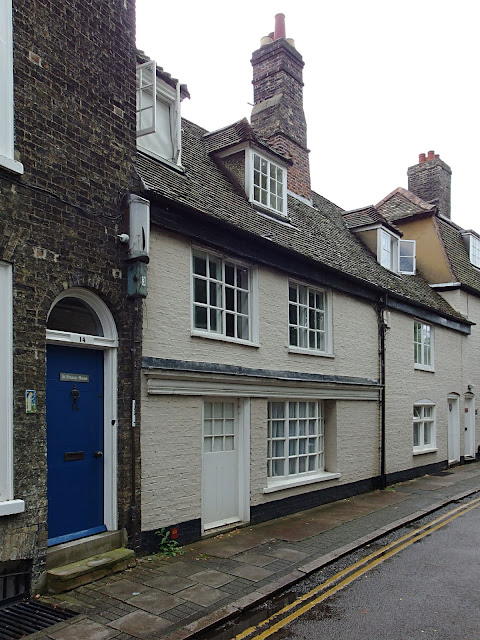 I can't help wondering if Mr Bowtell's unusual surname is derived from ancestors who lived by St Botolph's. Even if not, then Mr Bottle would be an excellent name for a pub landlord! 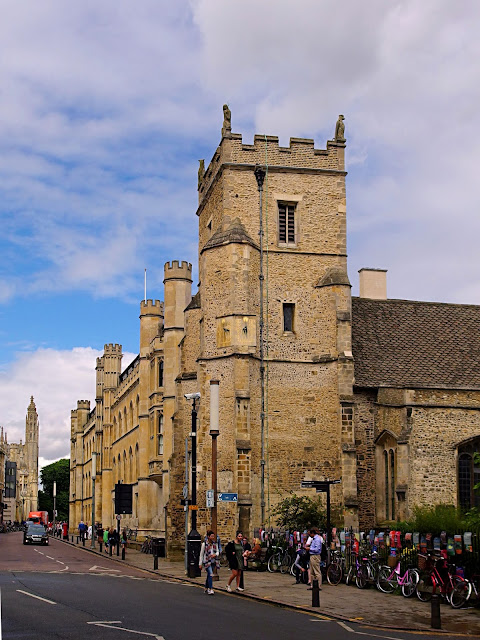 But never mind old Samuel, who was St Botolph?


Botwulf, Botulph, Botulf or Botolph of Thorney was an English abbot and saint who lived sometime around the year 600 AD - and not much more is known about him! He was the patron saint of travellers. 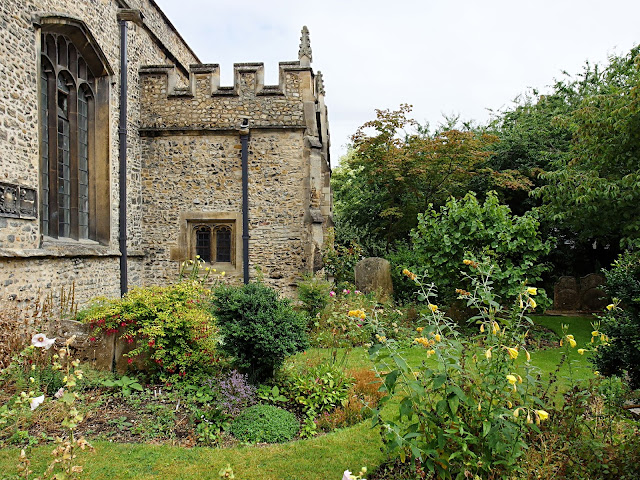 London had four churches dedicated to St Botolph, standing at Aldersgate, Bishopsgate, Aldgate and Billingsgate, the last of these burned down during the Great Fire and was never rebuilt but the others survive. You'll notice that all four places contain the element "gate" indicating the old gates of the city. They were churches for travellers to give thanks for a safe arrival or to pray for a safe journey on leaving the city. Cambridge's St Botoph's also stood at the town's edge, on the road to London. 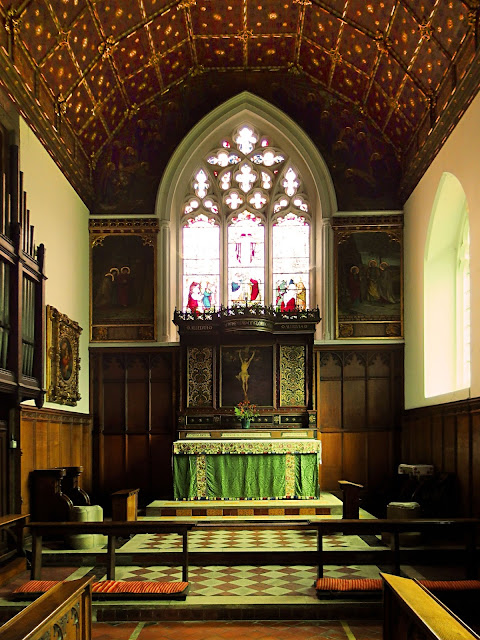 Stepping inside nowadays one might feel moved to give thanks from being safely delivered from the teeming throng of tourists on the Cambridge streets and into the cool, quiet interior of the church. There is some wonderful Victorian church restoration here by the ever-industrious George Bodley, whose work turns up in lots of Cambridge churches and colleges. I can remember a time when all Victorian work was despised by the self-elected guardians of good taste, nowadays its back in fashion once more.

This rather fine font cover is usually described as Laudian, after the troublesome seventeenth century Archbishop William Laud. Laud was nominally a Protestant but favoured elaborate decoration and ceremony which some thought was dangerously close to Catholic ideas. He was autocratic, pompous and outspoken - an explosive mix to have in seventeenth century England. At the height of his success he became Archbishop of Canterbury, but inevitably, perhaps, it ended with him being beheaded on Tower Hill in 1645. 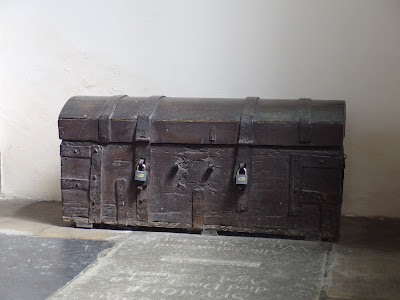 Something more functional and workaday is the old parish chest where important records and papers were kept. The two locks are an insurance against documents getting lost; two keyholders would have to be present to remove or deposit items. 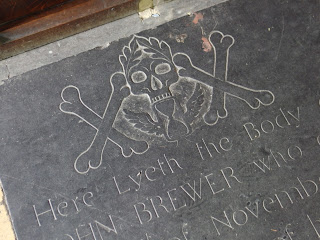 Our ancestors didn't muck about when it came to death. None of your "passed from this life", "went to sleep" or "resting in peace" for them. "Here Lyeth the Body of JOHN BREWER who died on the 21st of November 1706..." and to make things perfectly clear there's a skull an cross-bones as well. 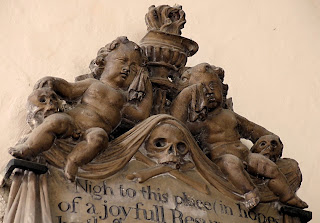 "Nigh to this place (in hopes of a joyfull Resurrection) lyeth ye body of Hannah ye wife of Robt Roberts by whom she had three children, Robert, Ann, and Hannah, and was a Loving wife & an indulgent Mother she departed this life ye 17th day of August in ye year of our Lord 1711"

A little more sentimental with weeping cherubs but still plenty of skulls around. 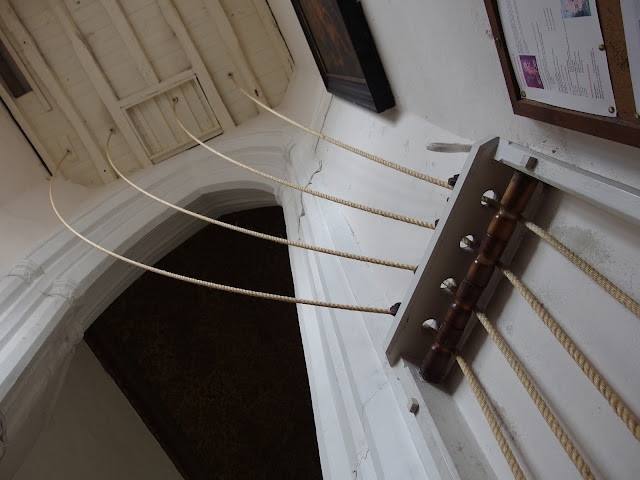 This seems to be an elaborate arrangement to allow one person to ring the four church bells. The only such set up I've ever seen. Apparently it's called an Ellercombe chiming apparatus and you can see it in operation here. (Amazing what you can find on YouTube if you take the time to look). 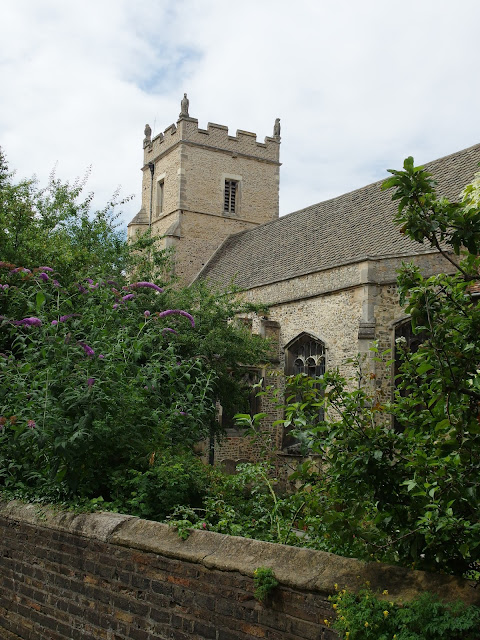 Email ThisBlogThis!Share to TwitterShare to FacebookShare to Pinterest
Labels: Cambridge, Visits To Churches