A much-delayed post from the church at Much Hadham. 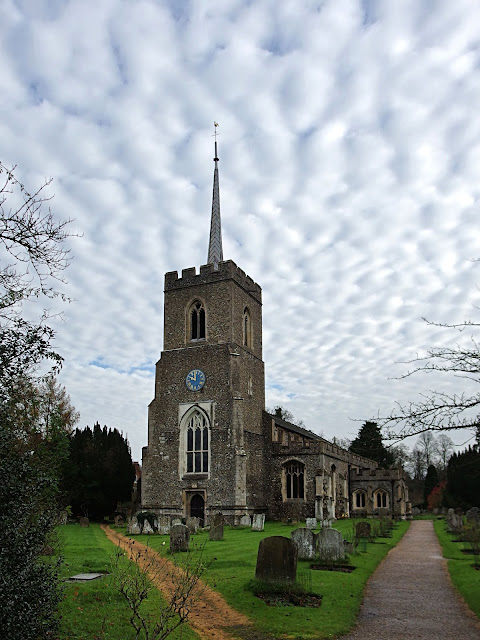 Here's the problem: I have a glorious day to spend outside admiring the pastoral scenery of the pretty valley of the River Ash, but somehow I not only get caught up photographing a village street but then go into an dim old building with no views out at all. On the face of it it doesn't make sense. Though when the village is Much Hadham and the building is the magnificent medieval church then it's essential viewing. 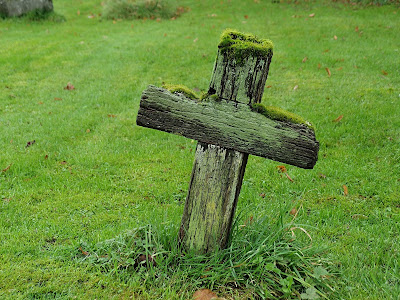 In the churchyard my eye was attracted to this simple wooden cross marking the grave, I presume, of someone who couldn't afford a stone. At one time that must have meant the majority of the population; stone being hard to come by in this part of the world. 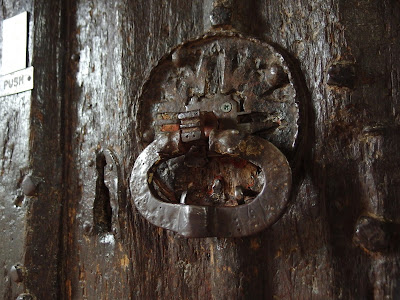 The church door has what must be one of the most battered and ancient door-handles that I've ever seen, though amazingly when you turn it you find it still works perfectly. Believe it or not there is an even older door, dating from about 1225 AD inside the body of the church. Unfortunately a combination of poor lighting and over-optimistic camera technique has robbed you of the chance to see it. 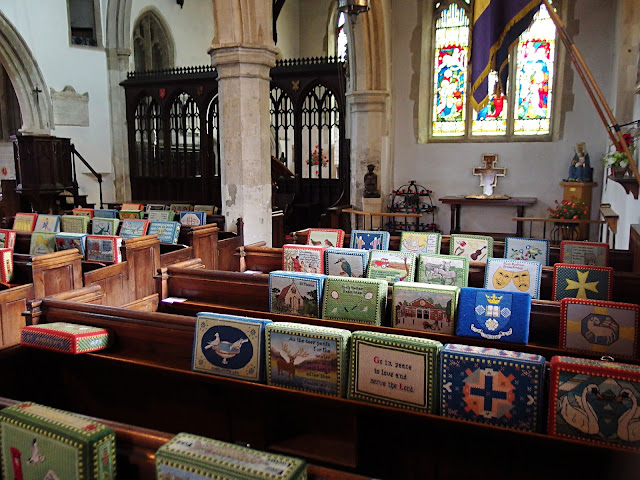 Once inside you find yourself in something more akin to a large urban church than one in a quiet rural parish. The reason for this must be the proximity of the Bishops of London whose palace was just next door. Despite the medieval artefacts and architecture one can't help but notice a more modern feature, namely the forest of colourful kneelers all decorated in cross-stitch by members of the congregation. 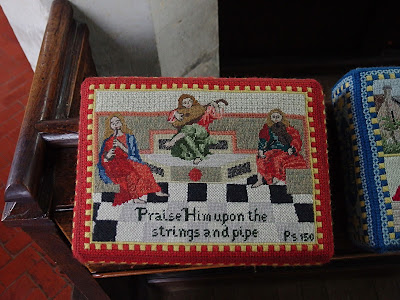 My mother embroidered a few such kneelers for her local church so I know how much work is involved. Indeed I designed one for her (you do it using graph paper) and even that isn't easy. 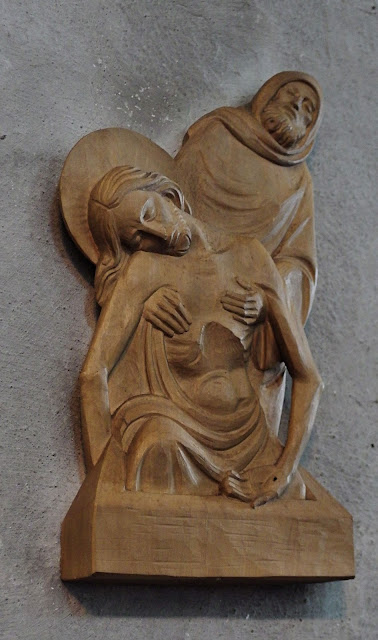 The church has some things you wouldn't normally find in an Anglican church, such as some modern wooden carvings representing the Stations of the Cross. These are present because the building is shared with the local Catholic congregation, something which wouldn't have been contemplated in the past but is a neat solution to spread the cost of maintaining the building and using it to its full potential. 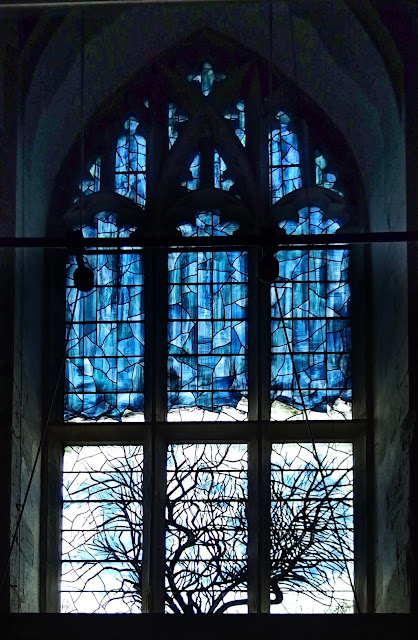 There's also a very unusual west window, the design of which is based on an etching by the sculptor Henry Moore who lived locally. 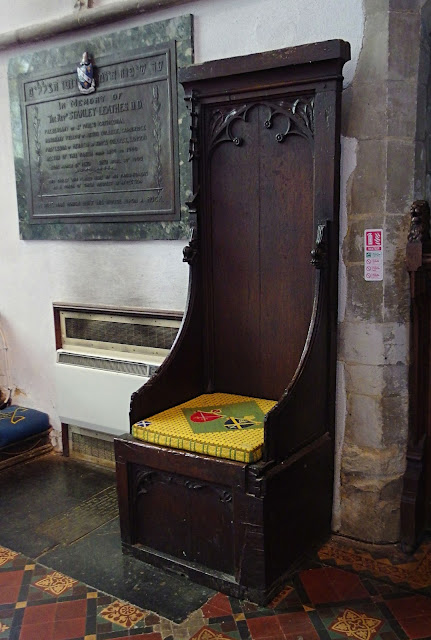 There are two of these ancient chairs which are a rare survival of church furniture from the early 14th Century. It's thought that they might be part of an old sedilia, a set of three seats for the use of the clergy, but the middle one has been removed to leave two individual chairs. 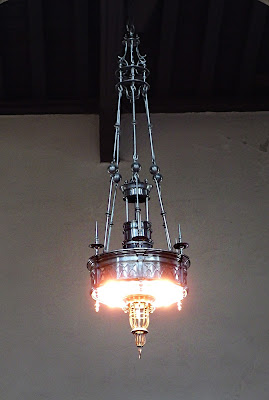 The lights in the nave immediately catch the eye and date from the Arts and Crafts period. 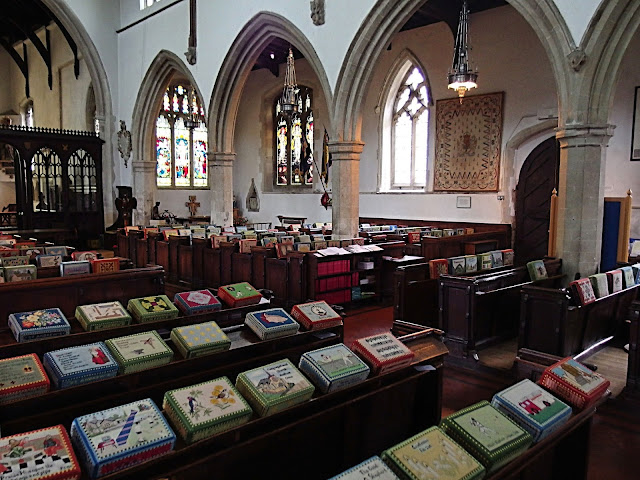 On the way out I noticed something which I should have seen on the way in.... 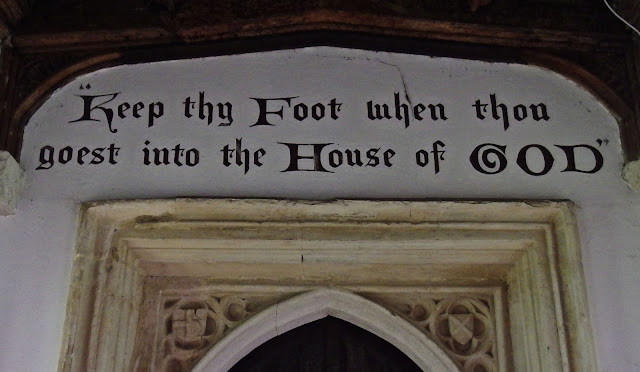 ....it's a simple joke from the Seventeenth Century telling you to mind the step. In case you don't get the joke there's a modern sign on the door telling you, less poetically, the same thing: 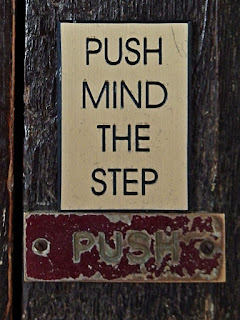 Posted by John "By Stargoose And Hanglands" at 12:30

Email ThisBlogThis!Share to TwitterShare to FacebookShare to Pinterest
Labels: Hertfordshire, Visits To Churches