Those who saw my last post may remember a smart, board-clad, gambrel-roofed building which I identified as Topcliffe Mill. It stands back from the road opposite the church and is not obvious to anyone driving by. But this weekend is National Mills Day, when around 450 of Britain's historic windmills and watermills are opened up to the public, so lets investigate. 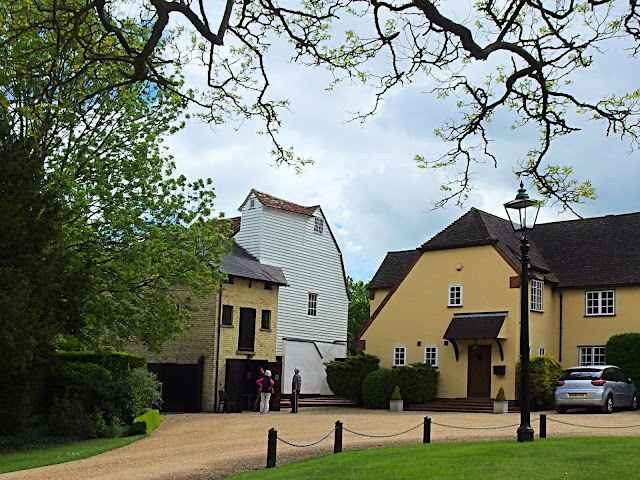 There's been a mill on this site since at least 1086 when the village of Meldreth was recorded as having eight-and-a-half mills - I'm guessing that one stood astride a stream that formed the parish boundary. The present building dates from about 1780 and operated till 1942. 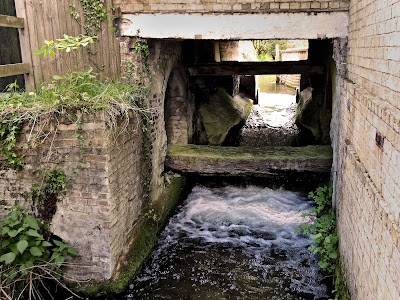 It is, of course, a watermill powered by the waters of the little River Mel. Sadly there's no waterwheel in place and, although replacing it has been considered, it would be very expensive and it's reckoned that the stream would also have to be modified to produce enough power. 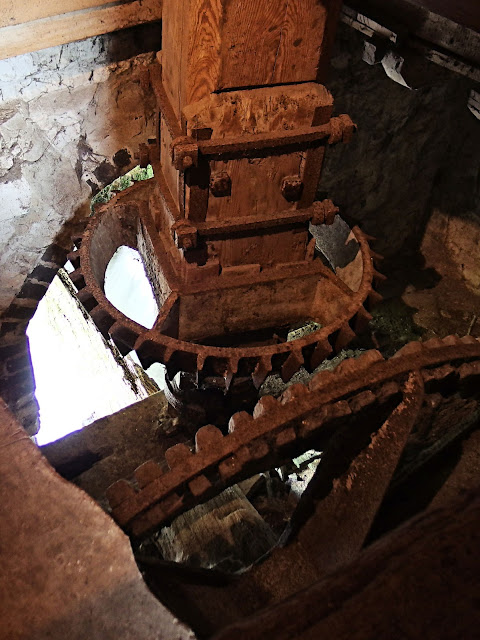 Inside the building however all the mighty machinery seems to be in place and you can figure out how everything worked, though it's hard to imagine how the building would have throbbed and hummed with life when everything was operating. 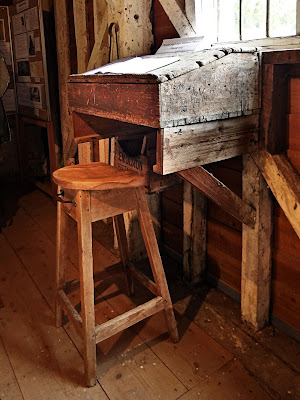 Here's the miller's desk where he kept a record of the grain he'd milled and how much he was owed by everybody. 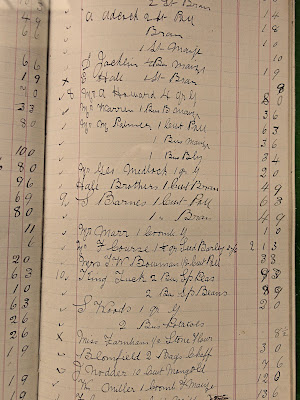 Lovely old handwriting; not many of us can write like that these days! 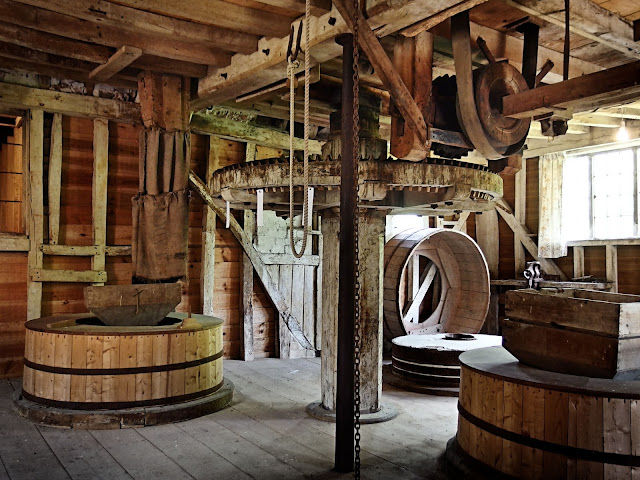 Climb up one floor on a rather basic wooden ladder and you're in the heart of the building where the huge millstones ground the flour and the "crown wheel" turned other pieces of equipment - machinery to clean the grain and hoists which lift the grain up to the top of the mill. 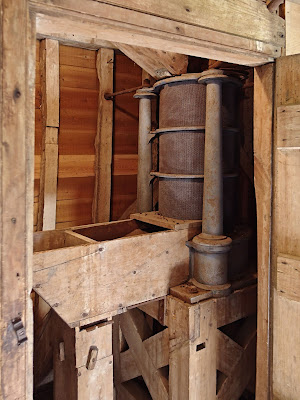 A sign told me that the bit of gear above is called a "smutter" and was used to remove spores of a fungus called "smut" which attacks the grain and spoils the flour. 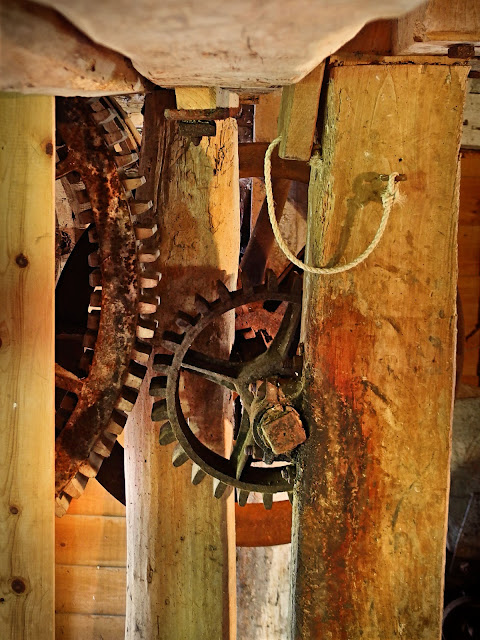 Here's a wonderful piece of rural technology: at the top of the picture you can see a piece of string which is attached to a wooden chuck, when this chuck is pulled out the shaft swings into the vertical and the gear-wheels engage. Simple but effective. 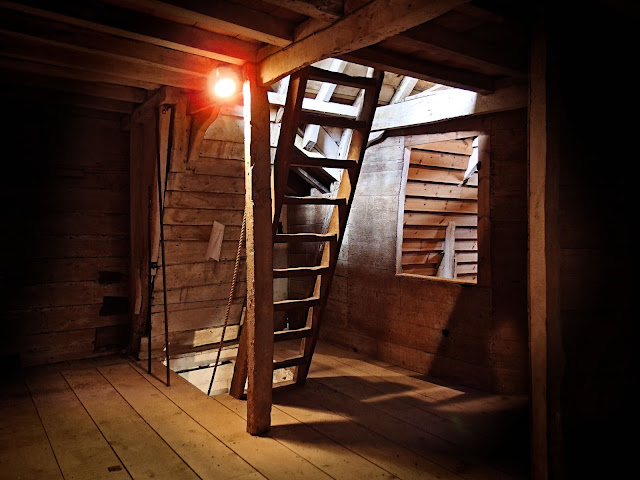 Ascend more steps to the apex of the roof space..... 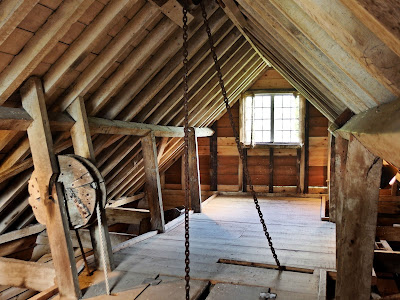 the sacks of grain were hauled up here by a system of pulleys so that gravity could then feed the grain down through the milling gear. 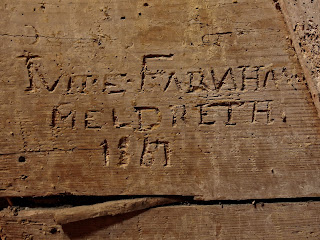 A nice little reminder that we haven't changed too much over the centuries - nineteenth century graffiti. I think it reads IVET.E.FARNHAM  MELDRETH 1867. If I'm right then there was an Ivatt Farnham who lived in the village and who would have been 14 at the time. His father was a corn merchant. 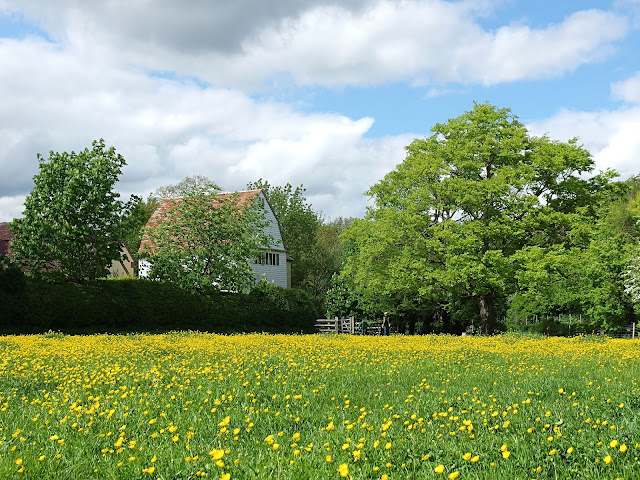 I decided to walk back home via the meadow footpath and couldn't resist one more photo of the mill with a foreground of yellow buttercups.

If you want to know more about the history of the mill and indeed the rest of the village then visit http://www.meldrethhistory.org.uk run by the Meldreth Local History Group.

Posted by John "By Stargoose And Hanglands" at 15:01