Waters Of The Lea 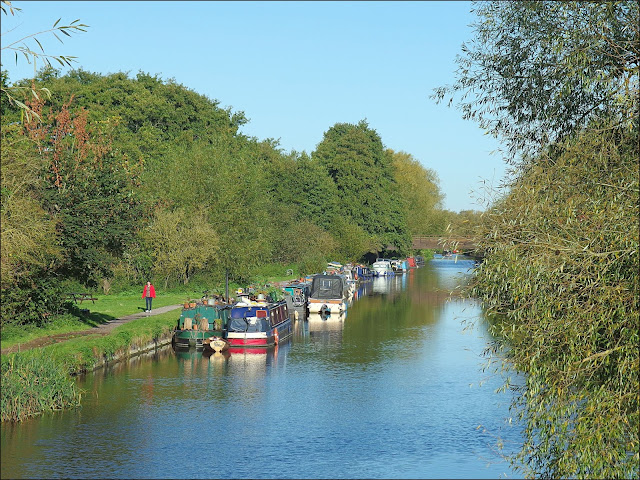 Wednesday hosted a rare patch of sunny blue skies in a week of grey clouds blowing in from the west, a chance then to go for a wander in the valley of the River Lea. The river was made navigable up to Hertford, initially for cargo boats but now used by leisure craft and houseboats. 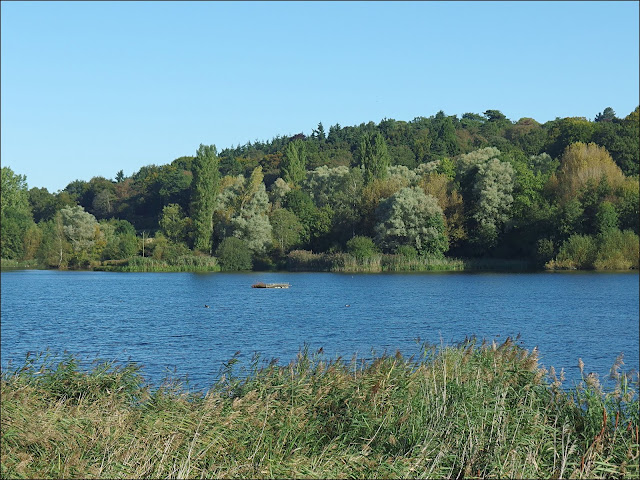 Changing uses is a theme throughout the valley. The lake above was once a commercial gravel pit but now forms part of Amwell Nature Reserve. The flat platform you can see floating in the distance is a raft put there for nesting terns. 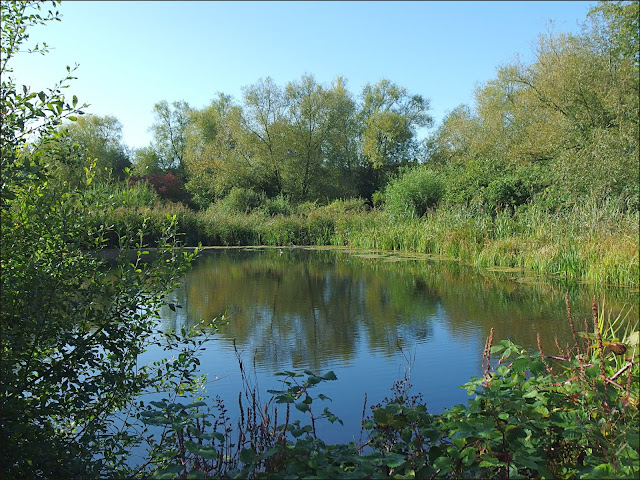 Although it's not apparent from these photos there's a lot more bird-life here than you might expect, given that it's in a fairly built-up area and the valley is threaded by roads and a railway. But the valley is a route regularly used by migrating birds. I presume that a bird finding itself over London would make for the relatively green corridor studded with reservoirs and flooded pits. 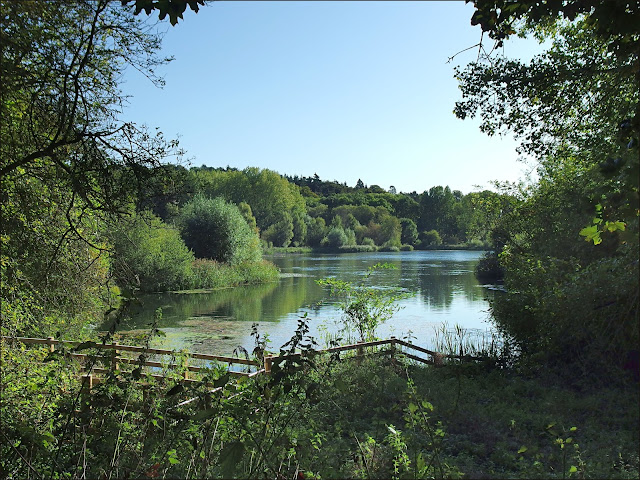 No great rarities were there on Wednesday, but it was such a perfect day that it didn't really matter. 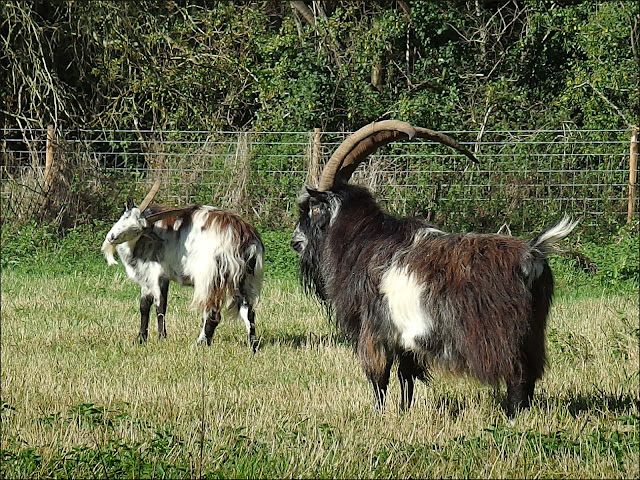 And there were goats! The superb, if somewhat smelly, individuals above are just part of a small herd engaged in browsing the vegetation to keep it in check on certain parts of the reserve. 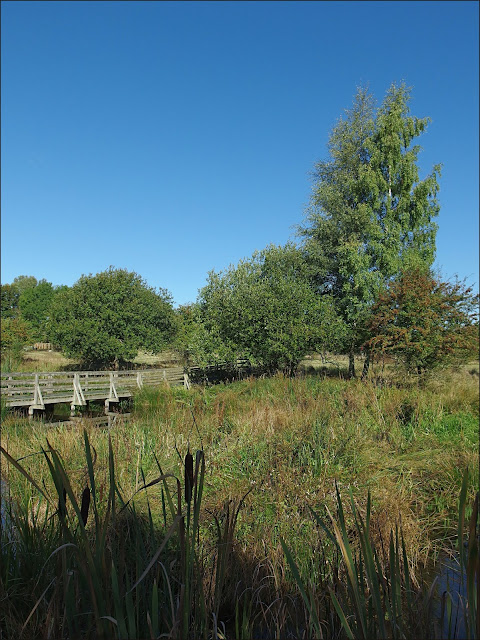 This little area is only open during summer months so that you can wander along the walkways and enjoy the many dragonflies that make a home here. It should be closed now that it's October, but the gate was still open. And the insects haven't realised that it's getting late in the season either! 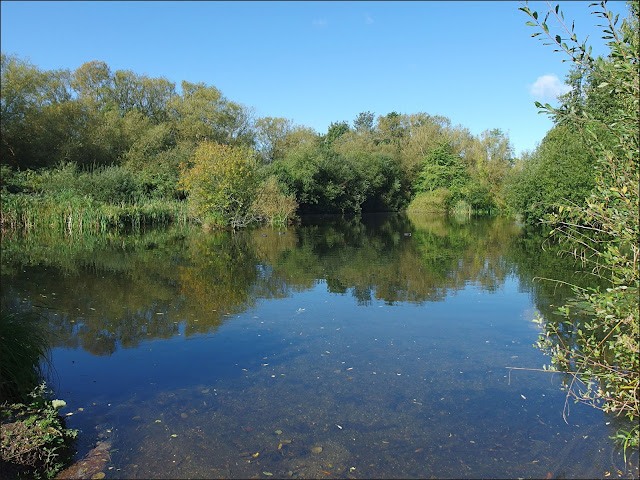 Not only birds and insects are attracted by the landscape; all kinds of people congregate here too - walkers, birdwatchers, anglers, boat people, cyclists, joggers, dog-walkers.... 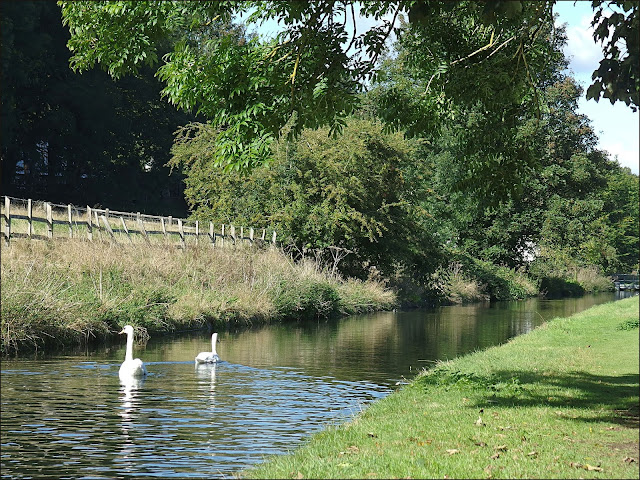 Running parallel to the main river is the so-called New River which was constructed to carry fresh drinkable water from the Hertfordshire countryside to central London. So it's an aqueduct rather than a river and can hardly be called "New" either; it's been here since 1613! There's a pleasant waterside path for most of its twenty-odd miles. 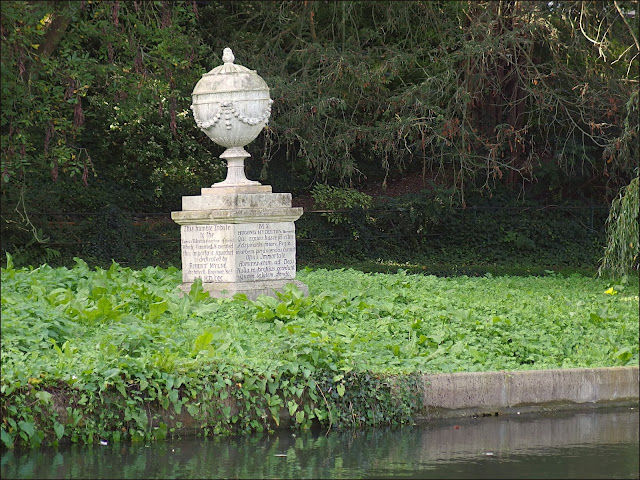 On a small artificial island below Amwell church stands this monument to Sir Hugh Myddelton (1560-1631) who was the driving force behind the construction of the waterway. It was designed by Robert Mylne, the chief engineer for the project, who has cunningly also commemorated his own achievements on one side of the stone. It also has a poem inscribed on it, which was written by Archdeacon Nares and with which I shall conclude this post about the waters of the Lea valley. 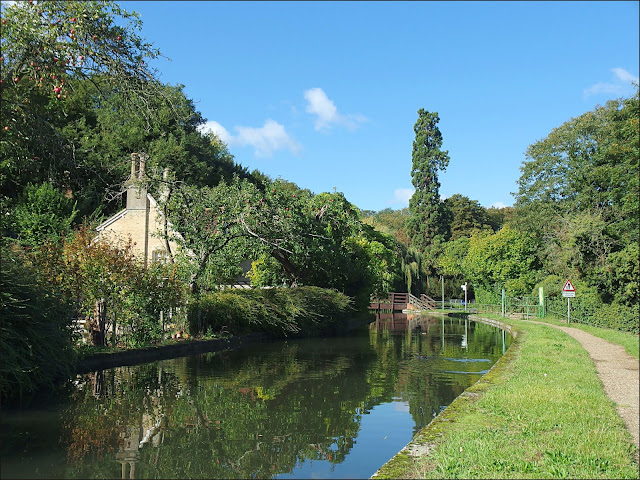 AMWELL! Perpetual be thy Stream,
Nor e'er thy Spring be less,
Which thousands drink, who never dream,
Whence flows the boon they bless.

Too often thus ungrateful man
Blind and unconscious lives,
Enjoys kind Heavn's indulgent plan,
Nor thinks of Him who gives.

Posted by John "By Stargoose And Hanglands" at 18:26

Email ThisBlogThis!Share to TwitterShare to FacebookShare to Pinterest
Labels: Hertfordshire