Crow-land. Even as the two syllables slide across the tongue they start to conjure images. Dark birds wheel around crooked ruins rising above the misty fenland marshes, perhaps. Sometimes it's called Croyland. What might that mean? Maybe from the French croyable - believable - a land of belief? Or Croix-land - land of the cross? 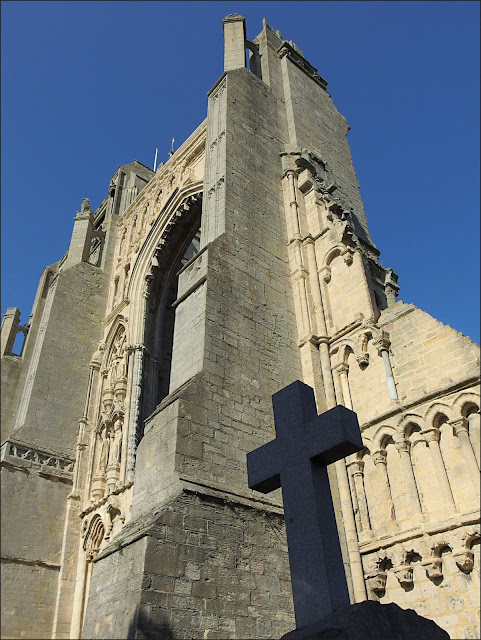 In fact the place was first mentioned in The Life Of St Guthlac, the story of a religious hermit who came to live here in about 700 AD, where it was recorded with various spellings including the unlikely Cruuuland. That's right, three "u"s, though I suspect the second and third were really meant to be a "w"; cruw being an old word for a bend in the river. Even so it's still a rather strange little place even when visited on a warm summer's afternoon in the twenty-first century. 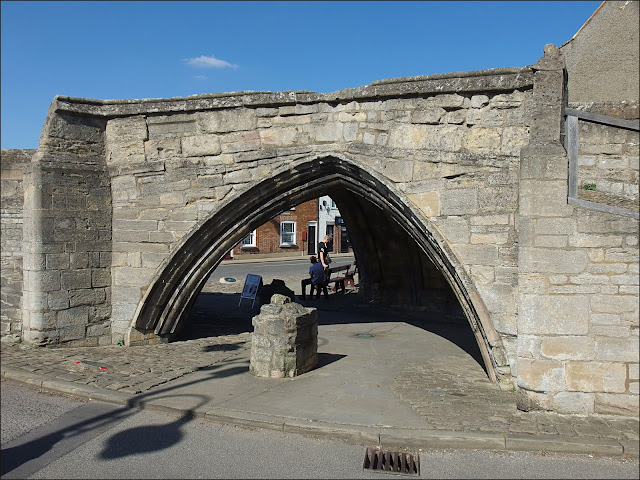 The first thing you encounter, once you've parked the car in the main street, is an extremely odd, and obviously very old, three-cornered bridge. Three sets of worn stone steps rise unevenly to the apex which spans - absolutely nothing! It's said that before the fens were drained the River Welland collected one of its tributaries here and the three-way Trinity Bridge was a neat cost-effective solution to crossing this meeting of the waters. In those days a boat would be essential to getting anywhere in this watery landscape. 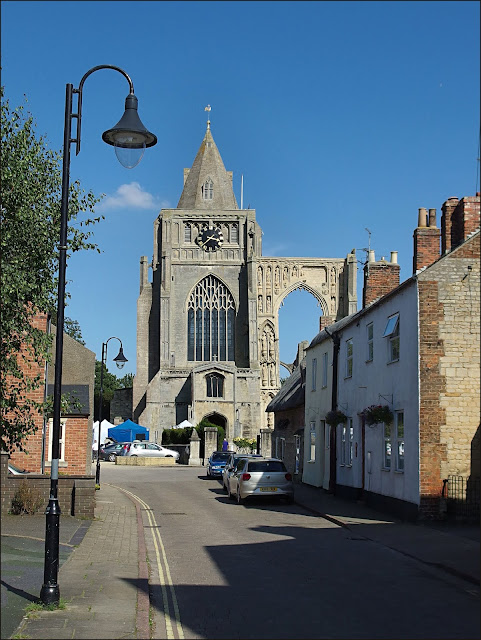 Just down a short side street stands this imposing façade which turns out to be the parish church, though it's obviously very different from the norm. What's more it seems to have a semi-detached ruin..... 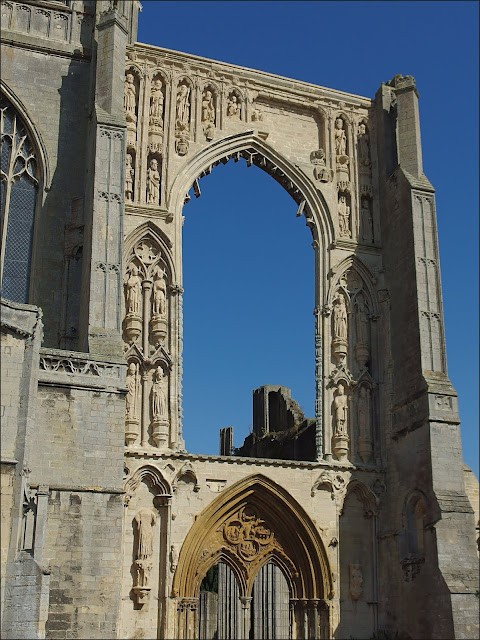 The statues in the niches whisper that this was once a very important building and also pre-dates the Reformation, though somehow the graven images have escaped destruction even though this part of the building has fared less well. 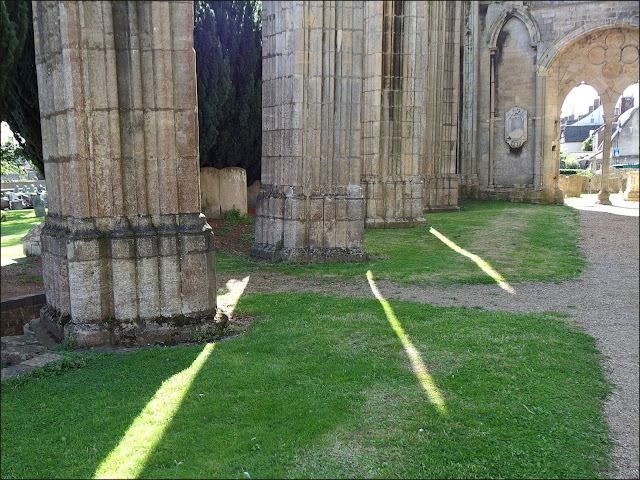 In the earliest days of Christianity devout men and women sought out isolated and often inhospitable places in which to practise their faith, and the islands in the fens offered them the chance to withdraw from wider society. In time they were joined by others and small religious communities developed. That's what happened on the marshy isle of Crowland, around St Guthlac whom we mentioned earlier. 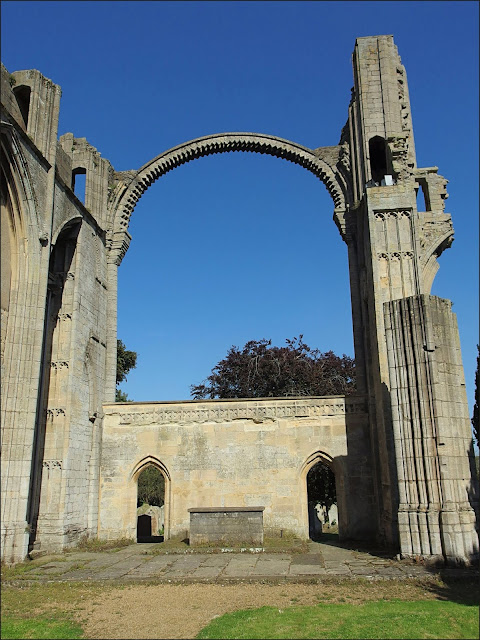 Although they had to contend with isolation, water-borne disease and frequent flooding, the fens would have provided them with ample food resources. Fish, particularly eels were plentiful as were wildfowl. The silts brought by the floodwaters proved to be very fertile allowing them to grow their own vegetables and providing summer grazing for cattle and sheep. The early attempts at draining small areas of the fens were carried out on the margins of their island. 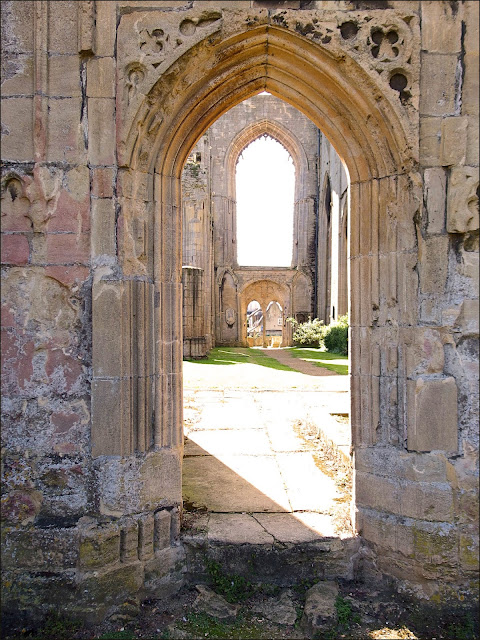 The earliest formal monastery on the site was founded by King Ӕthelbald in the early eighth century. It was completely destroyed and all the inhabitants put to death by the Danes in 866 AD. It was rebuilt shortly afterwards, as it was on two subsequent occasions after it had been destroyed by fire. But from about 1200 AD onwards the community flourished right through to the dissolution of the monasteries by Henry VIII. 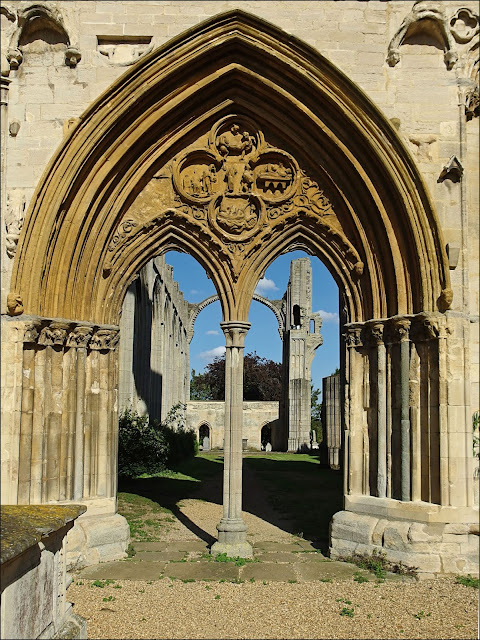 What we see today are the ruins of the nave and the south aisle, dating from about 1260 AD, though some parts may be as early as 1165 AD. The north aisle of the old Abbey Church has been retained as the parish church and has obviously needed restoration work over the centuries. 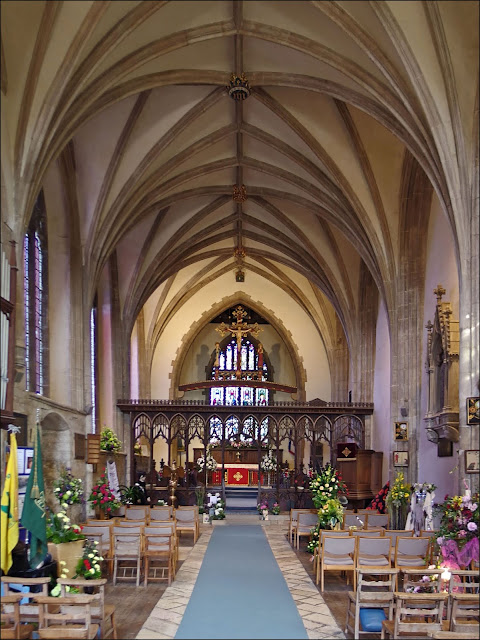 Just to re-iterate: this vast, long and lofty space is merely the northern aisle of the huge former church. If you think the left-hand wall and columns look a little askew, well, that's because they are. 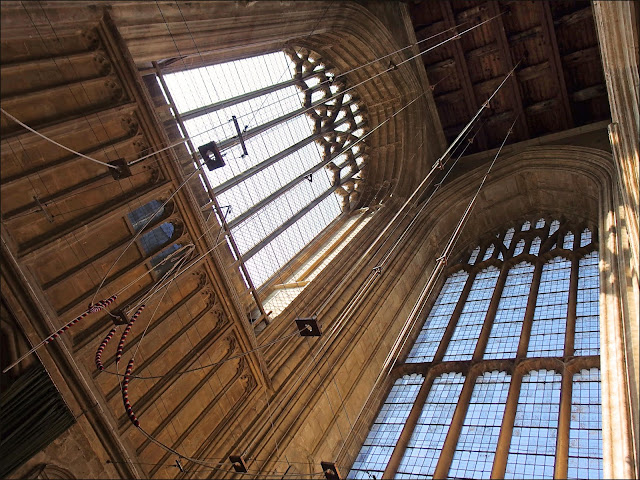 At the western end of church stands the bell tower with some of the longest bell-ropes in the land. In most great churches and cathedrals there is a ringing-chamber part-way up the tower, but here they are rung from ground level. It is claimed that the first peal of bells to be heard in England were those installed in Crowland Abbey. It was while the mechanism to hang these bells was being installed, at the time of the building of the western tower, that a miracle is said to have occurred which was attributed to the intervention of St Guthlac. The enormous weight of the apparatus put such a strain on the ropes and pulleys being used to hoist it aloft that the whole contraption came crashing down onto the workmen fifty feet below, but somehow none of them suffered any injury. 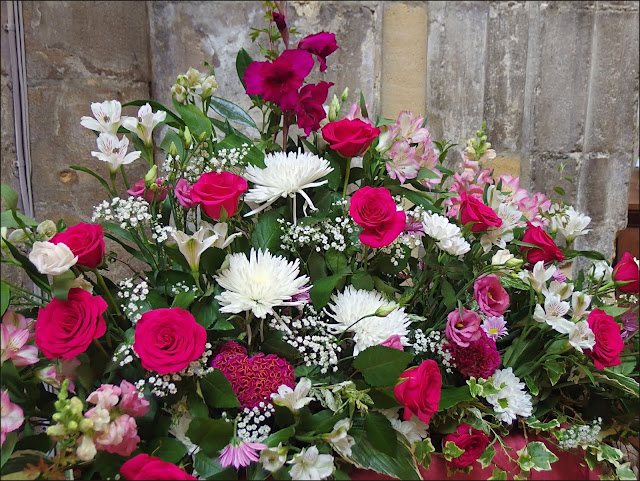 As you may have noticed, on the shot of the church interior which we saw earlier, there was a flower show taking place in the church. 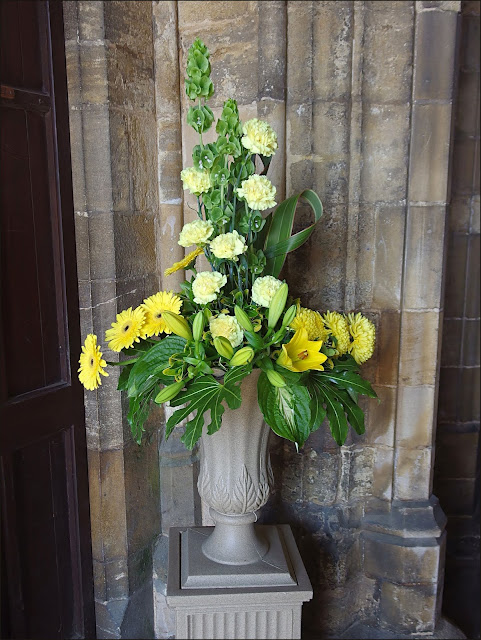 Also on the wall was an artist's impression of how the Abbey might have looked in its hey-day, before Henry VIII's men got to work on it.... 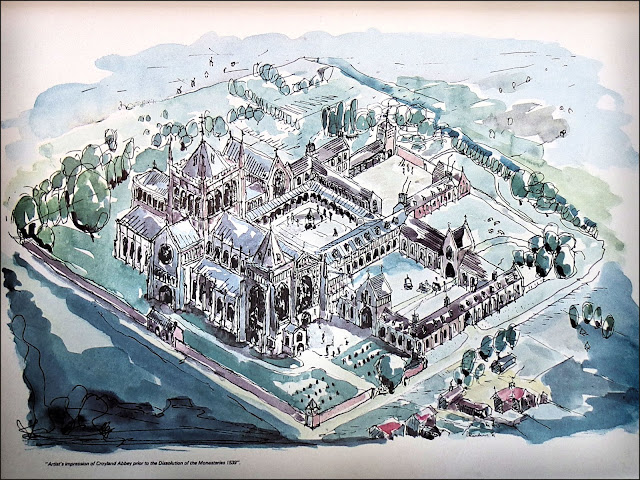 With many thanks to my brother Les, who did the driving, and three of my American cousins, Sue, Theresa and Judy, who made the whole day so enjoyable.

(It strikes me that if St Guthlac could perform miracles to save the workmen from a seemingly certain death, then he might have just as easily persuaded them to make their ropes and pulleys a little stronger. Just a thought).

Posted by John "By Stargoose And Hanglands" at 18:20