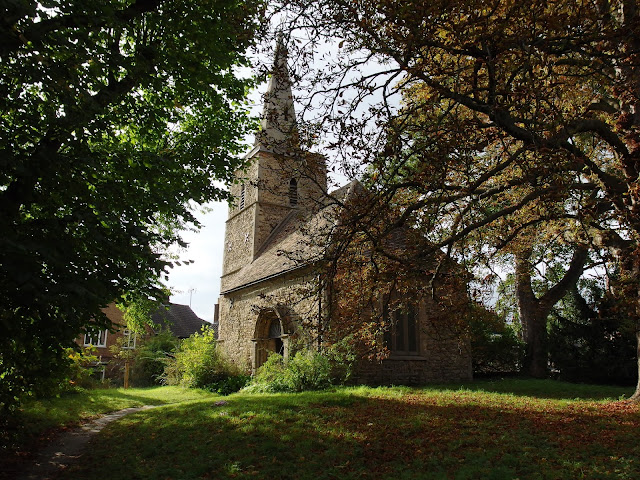 St Peter's looks like the perfect little country church, the kind of place you'd approach by a long leafy lane and need a good map to find. Which is all rather strange because it's in the middle of Cambridge, near to the castle mound which would have formed the focus of the old town. It looks very quaint and old, but it was largely rebuilt in the Georgian period. However it does hold an older mystery as we shall  see. 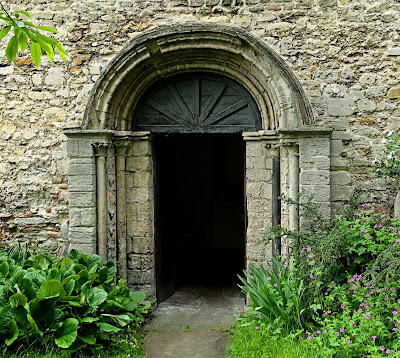 We enter through a Norman arched doorway which presumably survives from an older building and find ourselves in a small, rather austere space. The church is now too small to be viable as a place of worshp in a large city, though I know that there are many neighbours who use it as a place for prayer and reflection. It's in the care of The Churches Conservation Trust and, though they preserve the building, the interior is rather bare and spartan, though there is a rather interesting font. 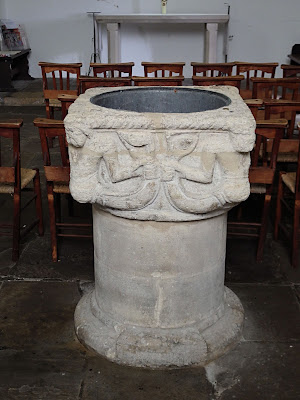 It's thought to date from the early 11th century and is one of very few Saxon fonts still in existence. It's also the only one I've ever seen which is decorated with mermen, one on each corner. In their hands these extraordinary fellows can be seen to be grasping their tails, and surprisingly they each are equipped with two: whoever knew that Saxon mermen had two tails? 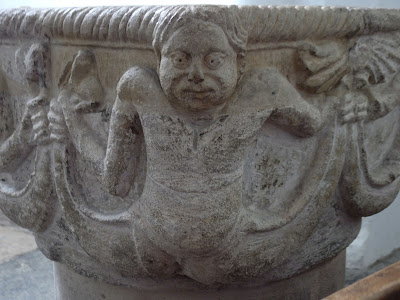 The font has undergone some repair work at some time; all the original faces of the mermen are missing, perhaps just by accidental damage to the corners, or maybe due to the attentions of the Puritan iconoclasts of the 17th century. In the photo you can just about make out that the stone at the top of the figure is a slightly different colour to the lower portion. The other three corners still have the original heads though are lacking faces. 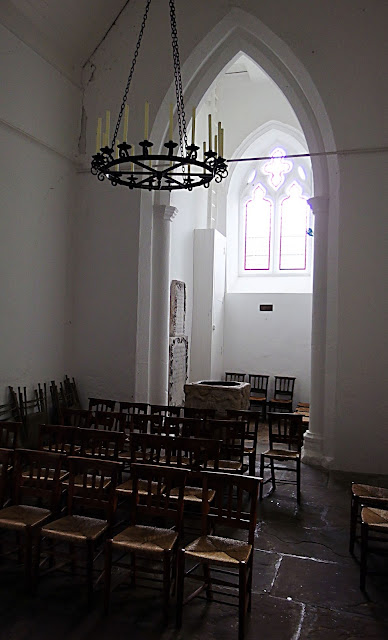 Quite what mermen are doing on a font is a bit of a puzzle. True enough there is a watery connection between mermen and fonts, as there also is to St Peter who is the saint of fishermen. But mermen in most popular mythologies are contrary and troublesome creatures who can summon up storms to sink ships: why would you want them on a font? 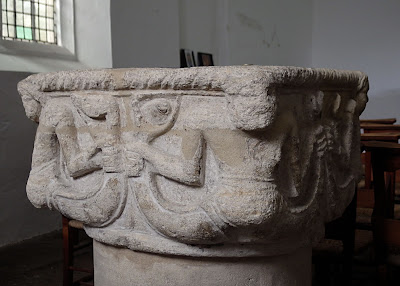 There is some evidence of an even more ancient belief that mermen were great teachers who had the power to see through all human lies and deceit, which would perhaps make them a little more appropriate. Or maybe, and this has just occured to me while I was in the kitchen making a cup of tea, the early Christian church was demonstrating that it was so confident in St Peter's power to protect us as we journey through life, that we could trust him to safeguard infants, even in the presence of mermen and other pagan deities. 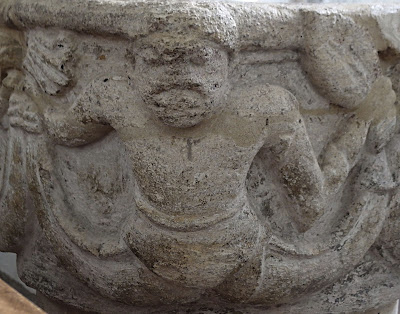 But why would they be in a church in Cambridgeshire, which after all is about as far as you can get from the sea on these small islands? Boats of that time would certainly have been small enough to navigate upriver as far as Cambridge but, even so, there were still some fifty or sixty miles of winding rivers, undrained fen and shallow washlands before you reach the open sea.

I suppose we shall never be able to enter the minds of our forefathers and see the world from their point of view. But it's still fun to try.

Posted by John "By Stargoose And Hanglands" at 19:28