Home On The Water 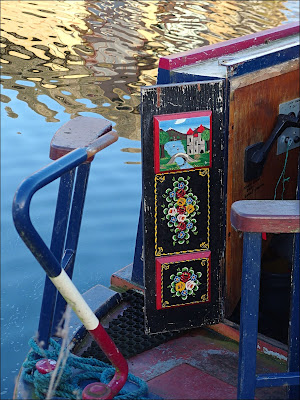 Before the railways, before the motorways, the means of transporting large loads from place to place were the canals. A horse could pull a boat with 50 times more weight than it could pulling a cart and that calculation triggered a huge canal-building programme throughout England.

The boatmen often took their families along with them to crew the boat, all living in a 10x6 foot (3x2 metre) cabin. Like the gypsies in their caravans, the boatmen and their wives made the most of their limited living space decorating every inch with polished metal, lace and bright paintwork. The usual themes were roses and castles, perhaps because they could never hope to have gardens or huge living spaces.

The artists were sometimes employed by the boatyards, and sometimes the boatmen themselves decorated their boats. The traditional designs are popular to this day.


Tony And The Prince 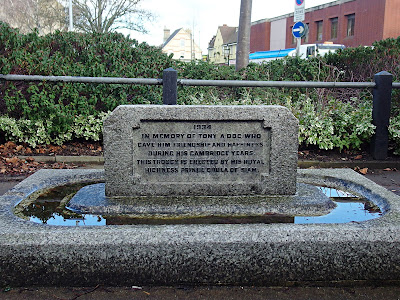 Tucked away in a less-than-attractive part of Cambridge, surrounded by busy roads, is this little water-trough for dogs. I don't think it can be much used; it's a lousy place to walk a dog! It was erected for "Tony", a dog who was kept as a pet by Prince Chula of Siam when he was a student at the University.

Incidentally the poet Lord Byron kept a bear in his room when he was at Trinity College. He seems to have done this in reaction to the petty college rules which prevented him from having a dog. Apparently there was no mention of bears.


At The Church Door 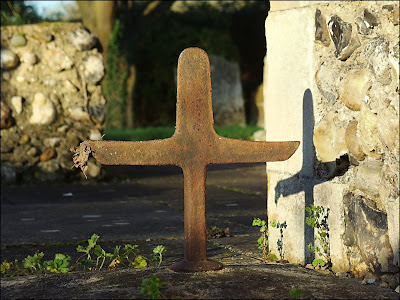 This strange little iron cross stands outside a church and is actually a boot-scraper. Having crossed some muddy fields it was just what I needed. My first thought was "How appropriate to have a boot-scraper in the form of a cross", but then I thought "Is it really OK to scrape mud off my boots on this symbol of Christianity?" Whatever, it looks as though generations of villagers have been using it for just that purpose for years. 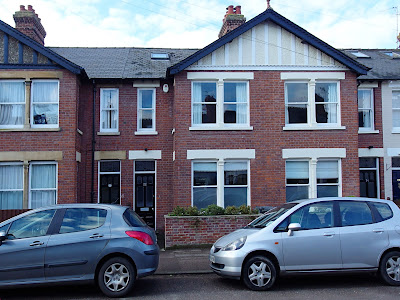 This rather plain terraced house in Cambridge's Eltisley Avenue was home to the poets Ted Hughes and Sylvia Plath during the early months of their marriage. Much as I appreciate the poetry of both of them I find it difficult, from what I've read of their lives and relationship, to warm to either as people. A good friend of mine grew up very close to here and I can't help but wonder whether she ever received any smiles from the pretty American lady or scowls from the Yorkshireman. Before meeting Hughes, Plath lived a few streets away here... 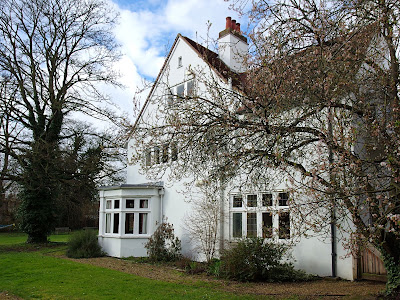 .....at Whitstead, a house owned by Newnham College. 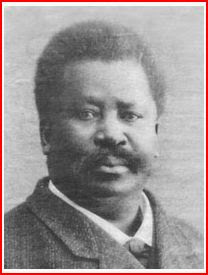 "The Hendersons will all be there
Late of Pablo Fanque's Fair
What a scene!"

Readers of a certain age will be familiar with those words from The Beatles' song Being For The Benefit Of Mr Kite, which John Lennon based on an old circus poster that he'd seen. What we didn't learn from the song was that the exotically-named Pablo Fanque was a real person, or that he was black, or that he was born in Norwich.

He was born plain William Darby, the son of an African who had been brought to England and trained as a house boy. Young William joined a circus, changed his name to Pablo Fanque, and became an acrobat, a tightrope walker, an animal trainer and an equestrian. His exploits on horseback and the tricks he and his horse were able to perform were said to be without equal and he is believed to have performed for the Royal Family. He went on to own his own circus.

The Benefit for Mr Kite was not a one-off as Pablo often arranged such evenings to help out retired or injured circus performers as well as other charities.

I'd always assumed that the use of the word "Somersets" instead of "somersaults" was a typical piece of Lennon lunacy, but in fact it's there in black and white on the original poster.

Posted by John "By Stargoose And Hanglands" at 12:23