Whenever I show you pictures of the thatched houses, of which there are many remaining in the villages around here, I get lots of interested comments. So here is a collection of pretty homes for those who wish to dwell deep in a dream of Olde England. (With apologies to at least one regular reader who will say "Yuk! Too twee by far!"). 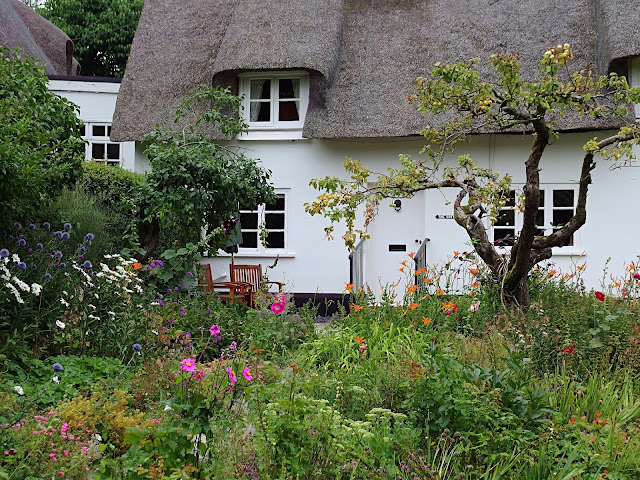 So what is a cottage? Well, not necessarily what I'm showing you here! The Domesday Book mentions "cotters" which were that class of people who lived in homes with a small amount of ground, enough to just about sustain a small family. These were poor people and were often worse off than serfs, who were themselves little more than slaves. 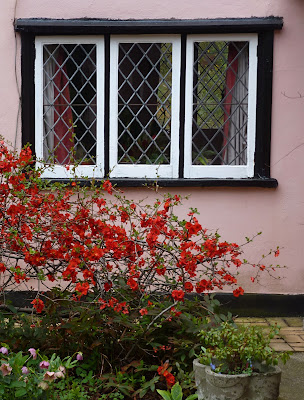 Over the centuries the cotters, or cottagers, could do little to improve their lot and, despite them being the bedrock of the economy, the rest of society did little to help them either. The homes in which they lived were mostly little more than huts; the word "cott" actually meant a hut for livestock originally. It was only the romantic poets who appropriated the word to mean a cosy, idyllic rural homestead. 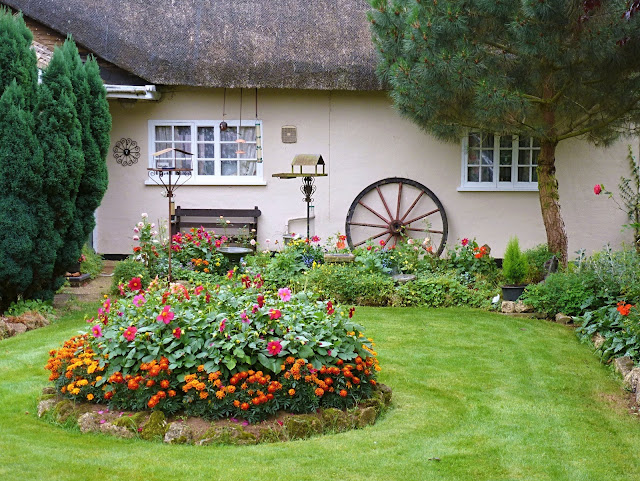 Unsurprisingly very few of the hovels that the true cottagers lived in survive. The buildings I'm showing you here would have been the homes of small farmers or tradesmen, though some are the houses which wealthy landowners constructed in traditional style for their workers during the eighteenth and nineteenth centuries. 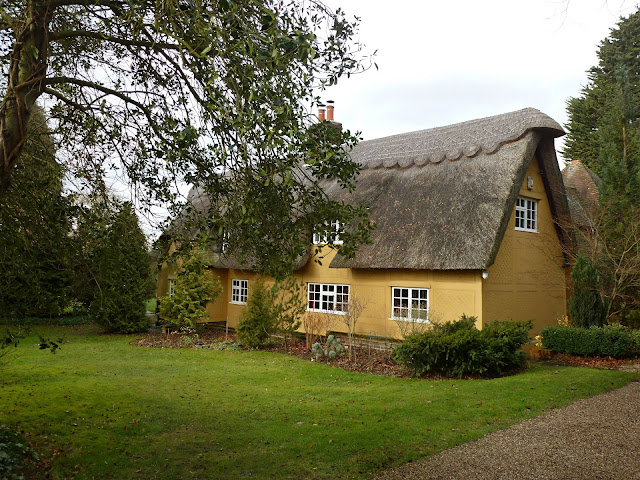 Another definition of "cottage" is "a small, rural house of traditonal style". This raises the question of "what is traditional style?" It would of course vary across the country depending on what building materials were available locally. So it doesn't have to have a thatched roof at all; it could be of slate, tile or even turf. Around here it just happens that thatch, either of straw or reed, is the cheapest and most plentiful material. 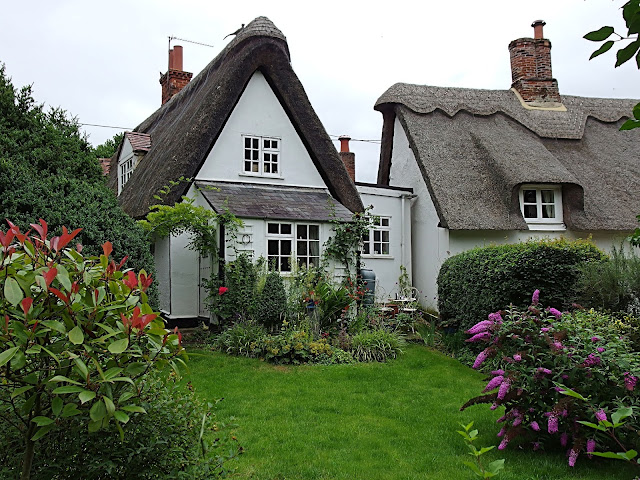 In this area you can't usually see how the walls were constructed because they are generally covered in some sort of plaster. Underneath there's usually a wooden frame which is infilled with woven willow to which the plaster adheres. It's called "wattle and daub" and sometimes the wooden beams are left showing which again is "the essence of Olde England". 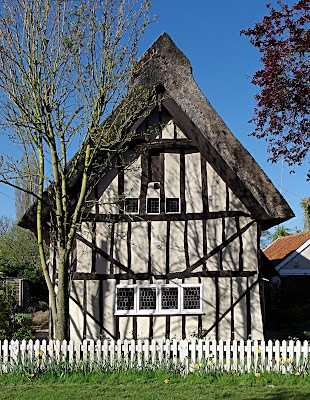 Another feature of the cottages around here is that the upper storey, which is where the bedrooms are, is at least partly in the roof-space. In the oldest examples it's been shown that initially there were no such things as bedrooms, just a platform reached by a ladder. Proper floors were a later innovation and were inserted afterwards. This leads to many odd steps and low beams in some old cottages. 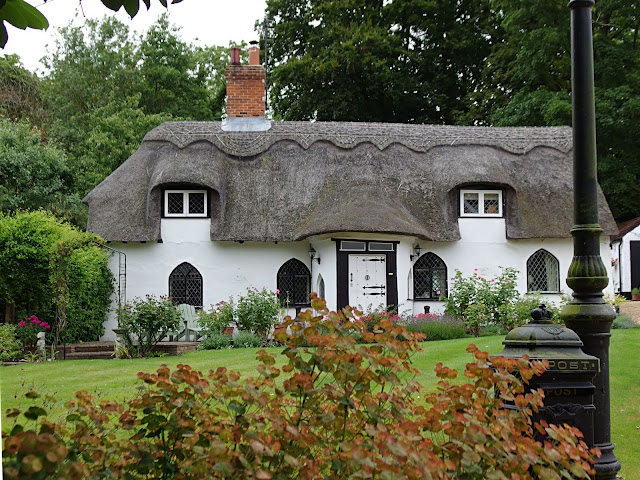 I can speak with some authority and feeling about the architecture of one cottage in particular as a friend of mine lived in it. All his family were short people but I was seldom able to visit without one or two painful blows to the head from low beams. 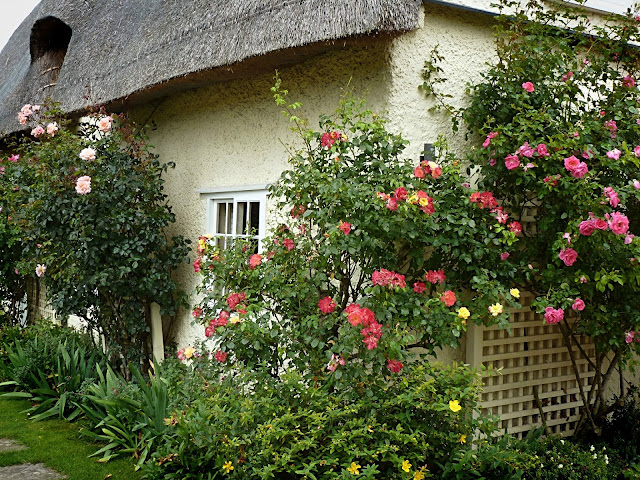 Fashions changed over the centuries too. All the stone-built cottages in the English Lake District were once left their natural colour. By Wordsworth's day people had started painting them white, much to the annoyance and dismay of the poet who campaigned against this ghastly practice. Strange then that today nearly every visitor to the area remarks on the delightful white-painted cottages. 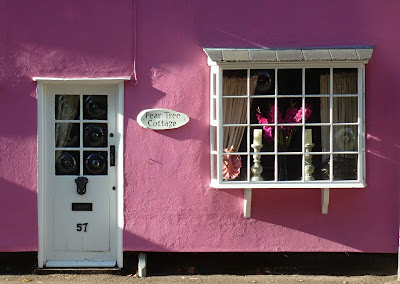 Meanwhile, down here in England's deep south, sometimes the whitewash was coloured pink by the addition of ox-blood. Though I don't think they were ever quite such a shocking shade as the one above! 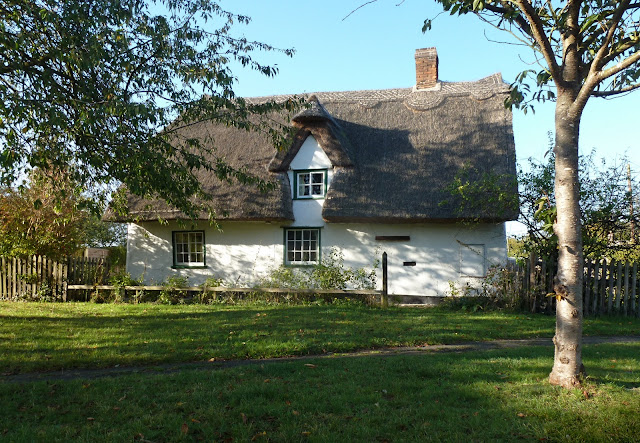