Denny Abbey And The Farmland Museum (3)

So at last we get to "The Abbey" though that's a name that might lead you to expect something rather more grand, but which also only hints at one aspect of this building's fascinating history. 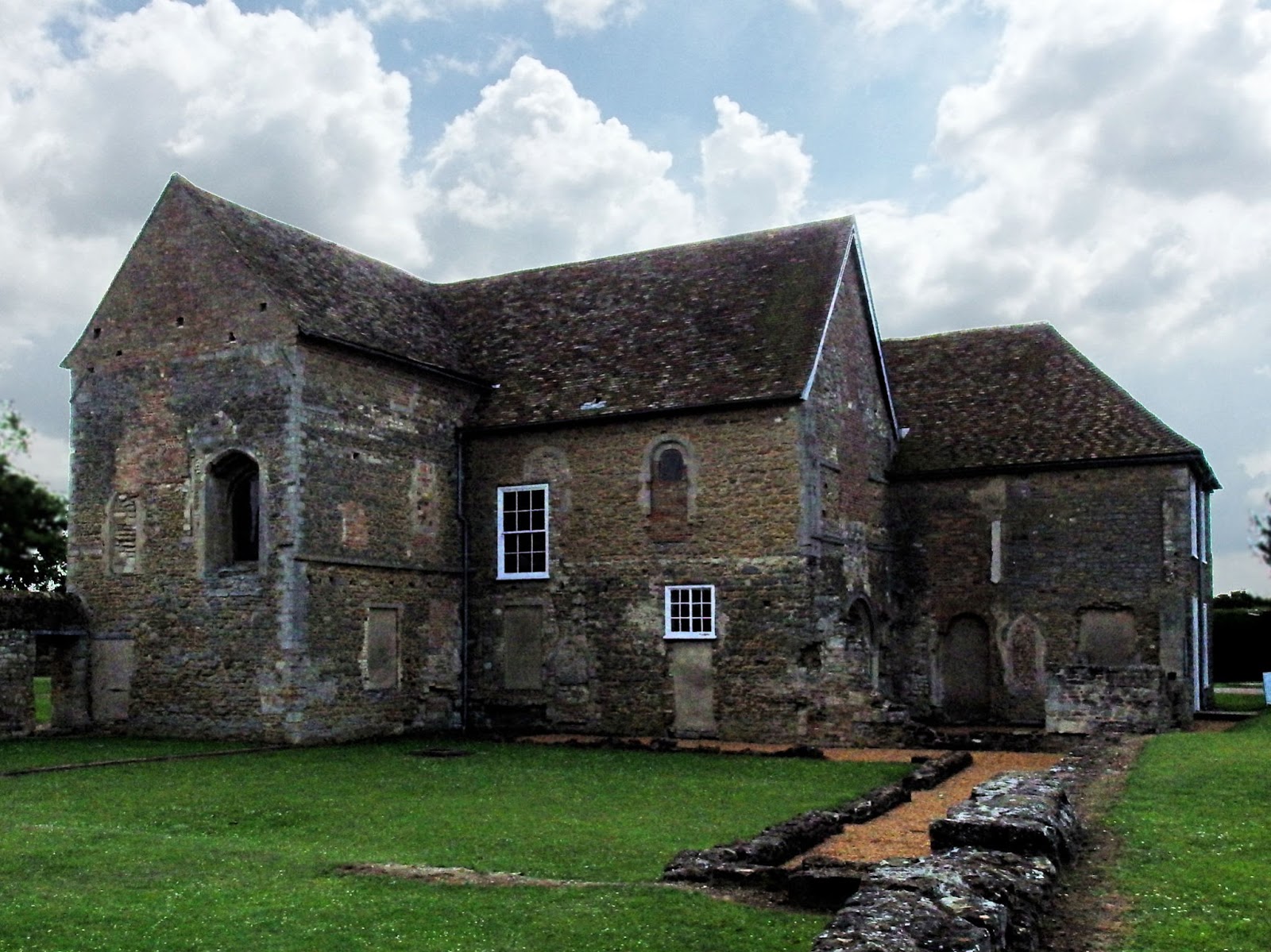 Even at first glance the Abbey poses some interesting questions. 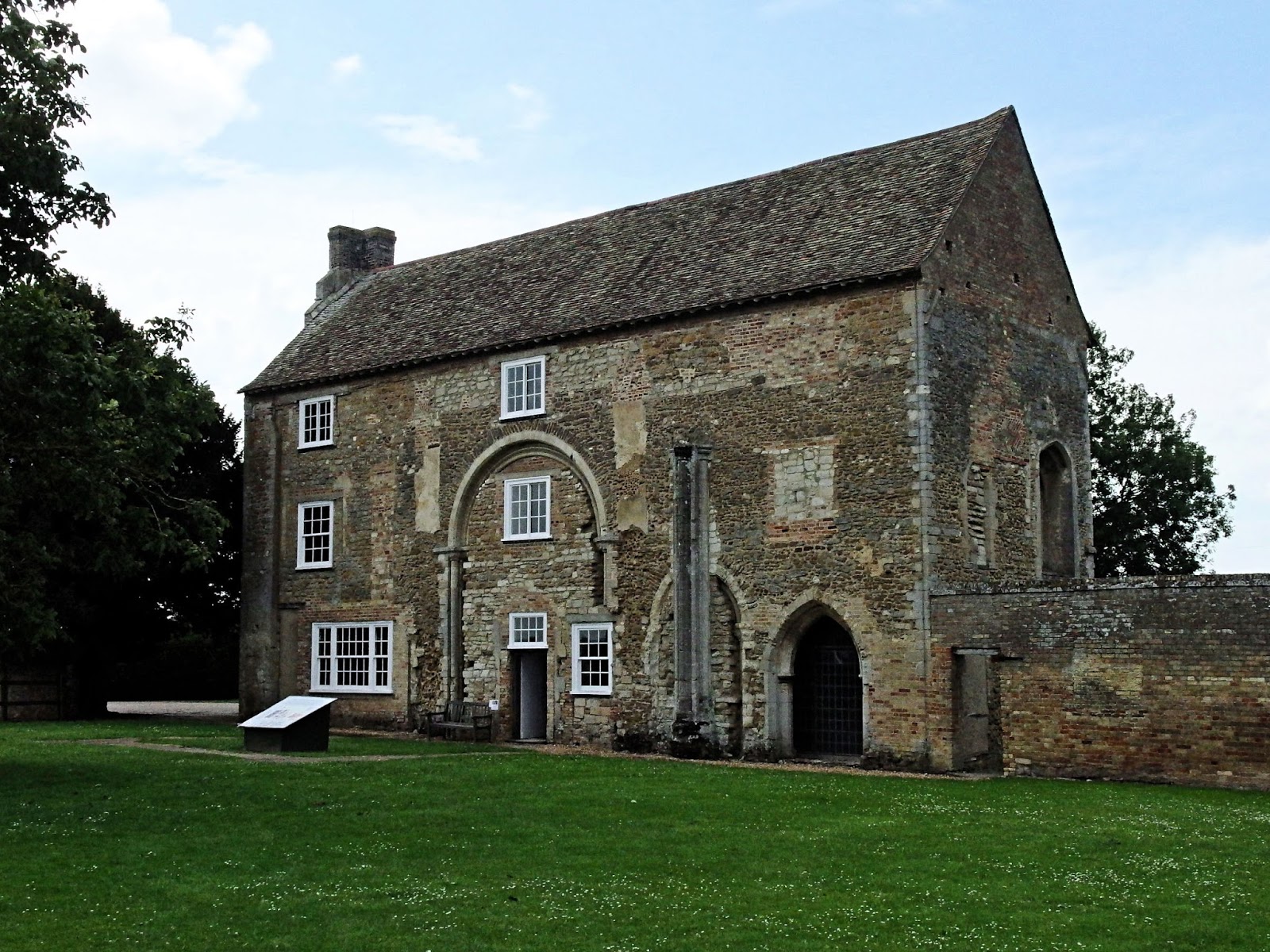 Round this side there are arches which are reminiscent of a church or abbey on the right of the building while the left-hand end looks more like a substantial farmhouse. And the bit in the middle can't seem to make up its mind what it wants to be! Better look inside.... 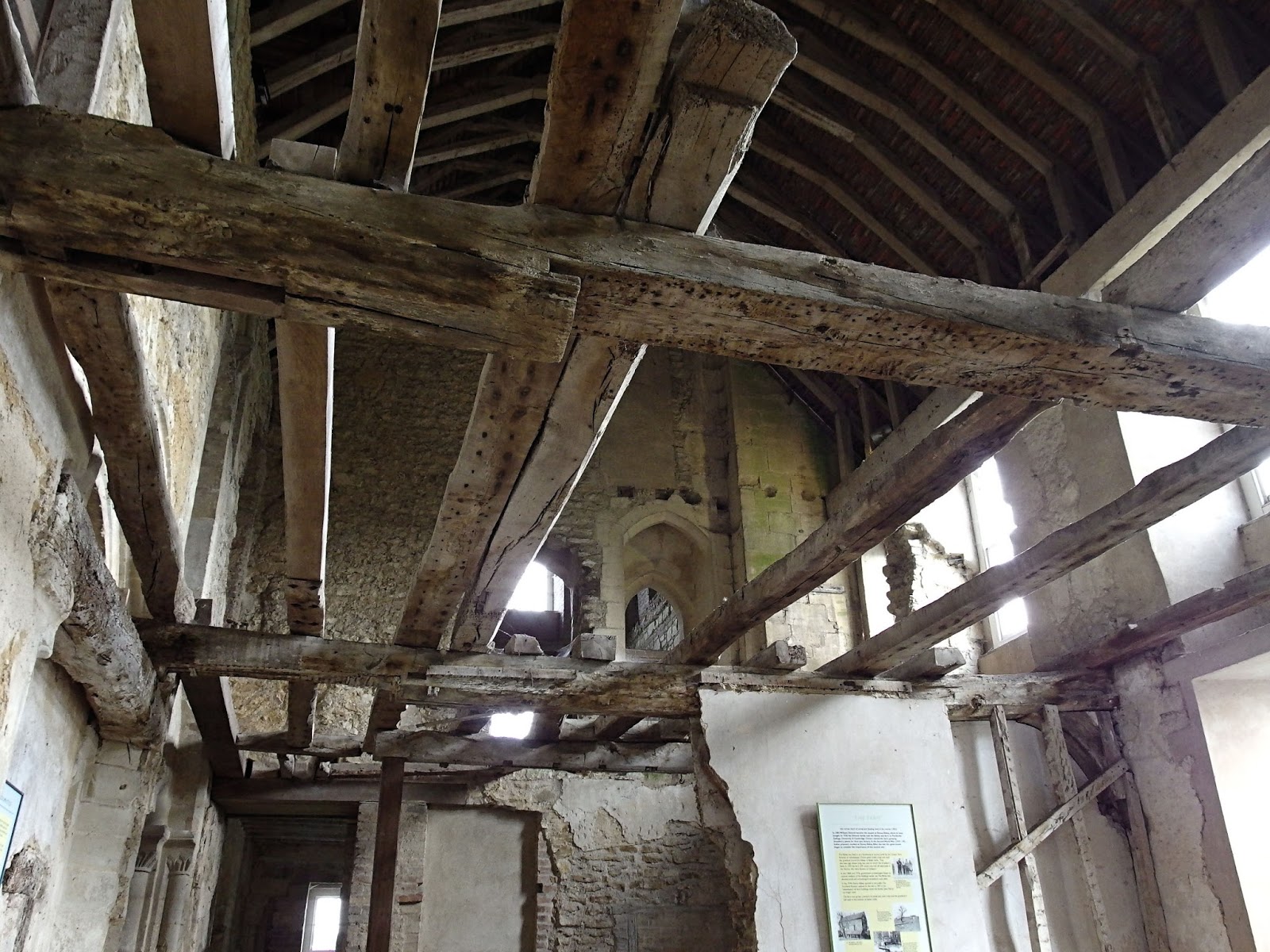 Ooooo-errr!
This is not what you expect when you visit a building in the care of English Heritage. Usually places are restored to something like their former glory or, if ruinous, are tidied up with neatly clipped lawns surrounding the remains. This is more like entering a building site! 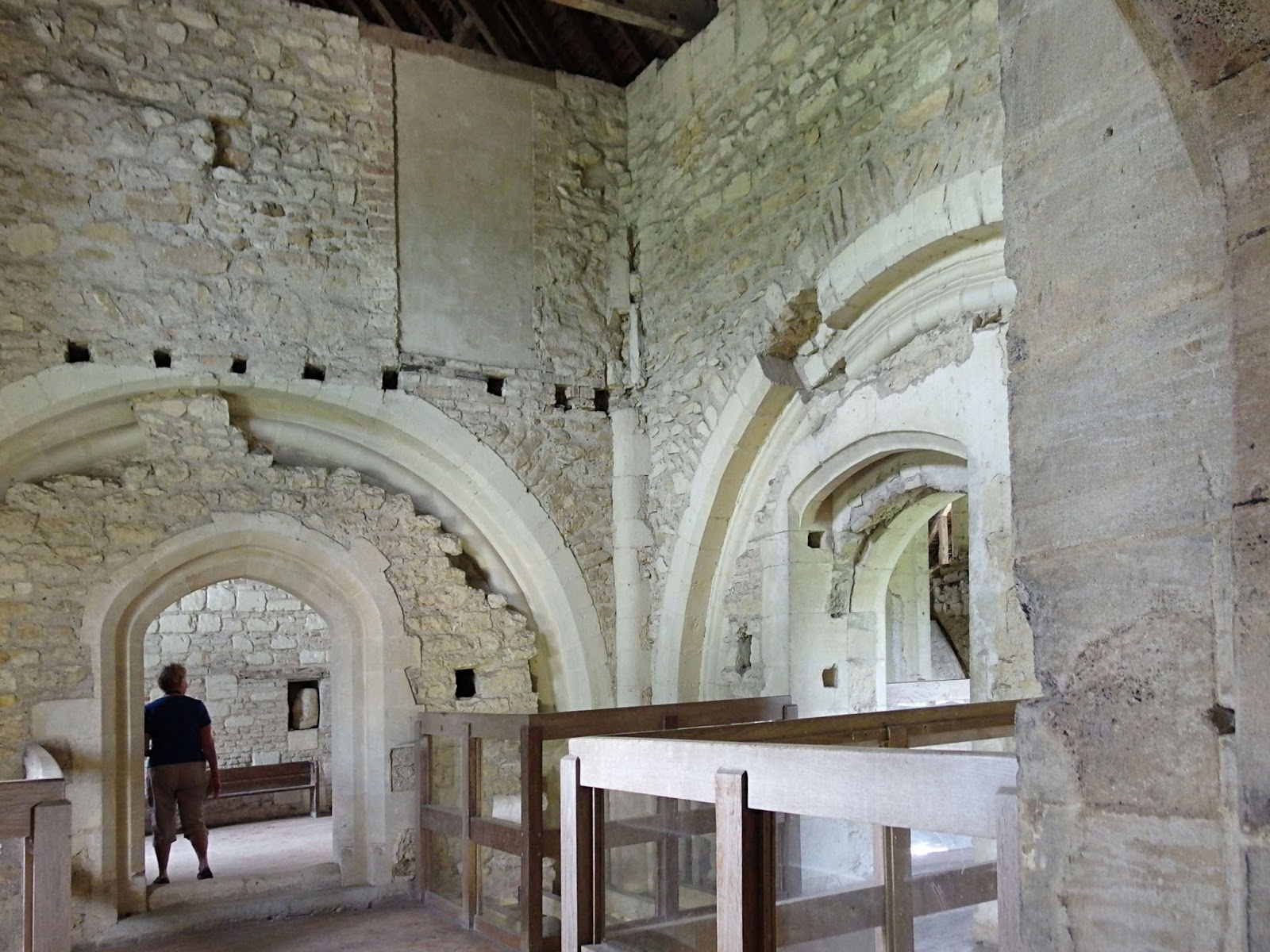 The visitor is invited to play a kind of architectural detective game to piece together the history of the building, the outline of which is as follows:

1159 AD    A Benedictine Priory was built here and this was their church.
1170 AD    The buildings passed to the Knights Templar who used it as a sort of 'retirement home' and hospital.
1308 AD    The Knights Templar were suppressed for alleged heresy and the building became disused.
1327 AD    It was gifted to the Countess of Pembroke who made part of the building into a comfortable home while the rest became a convent for the order of Franciscan nuns known as The Poor Clares.
1538 AD    The dissolution of the monasteries under Henry VIII, though nuns were still recorded as living here several years later.
1544 AD    The buildings became a farm.
1947 AD    The farm began its long evolution into a museum. 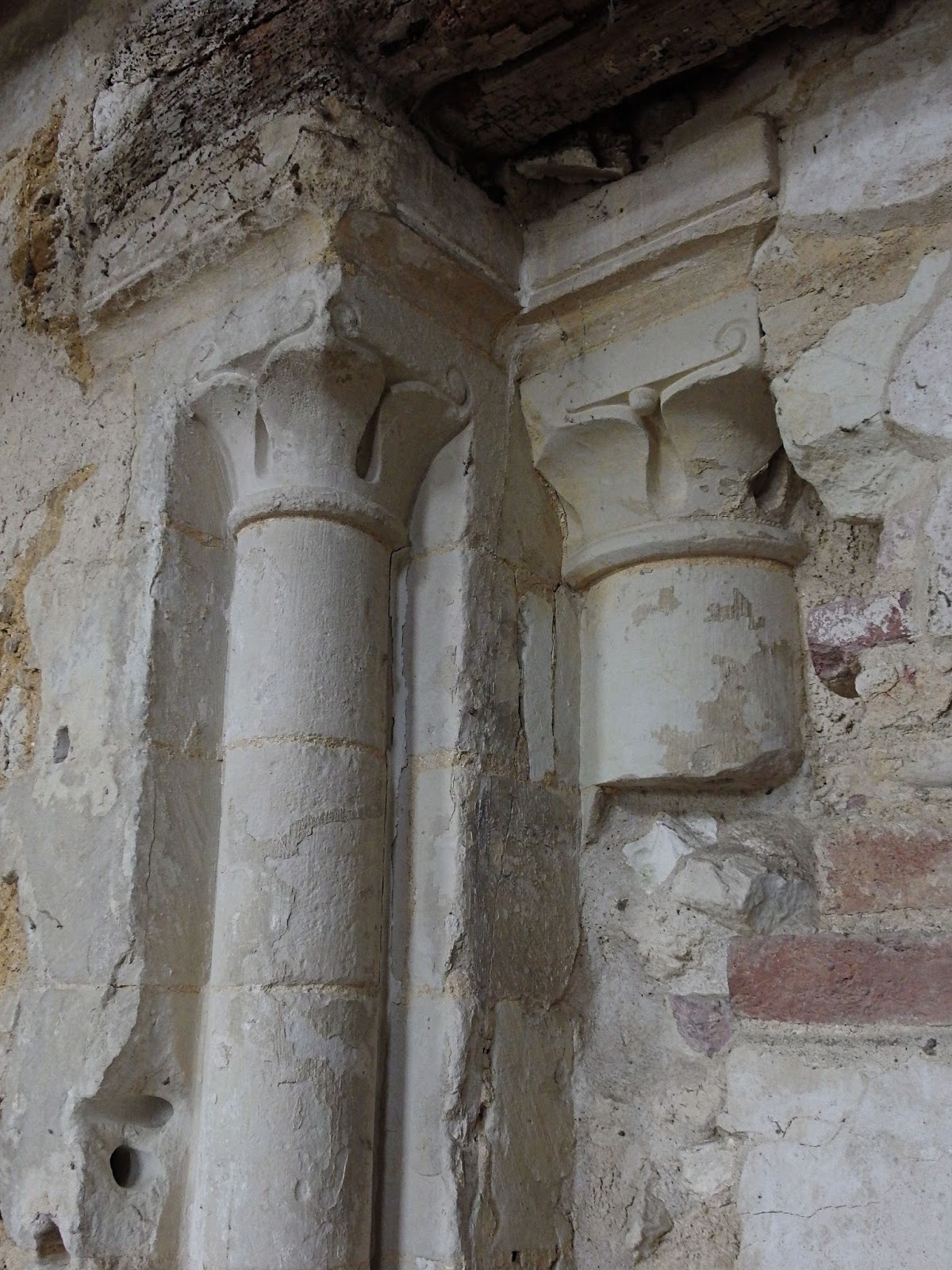 In places the brickwork has fallen away to reveal the columns and arches of the earlier buildings. The different shapes of the capitals of the columns give vital clues to the various periods of building. 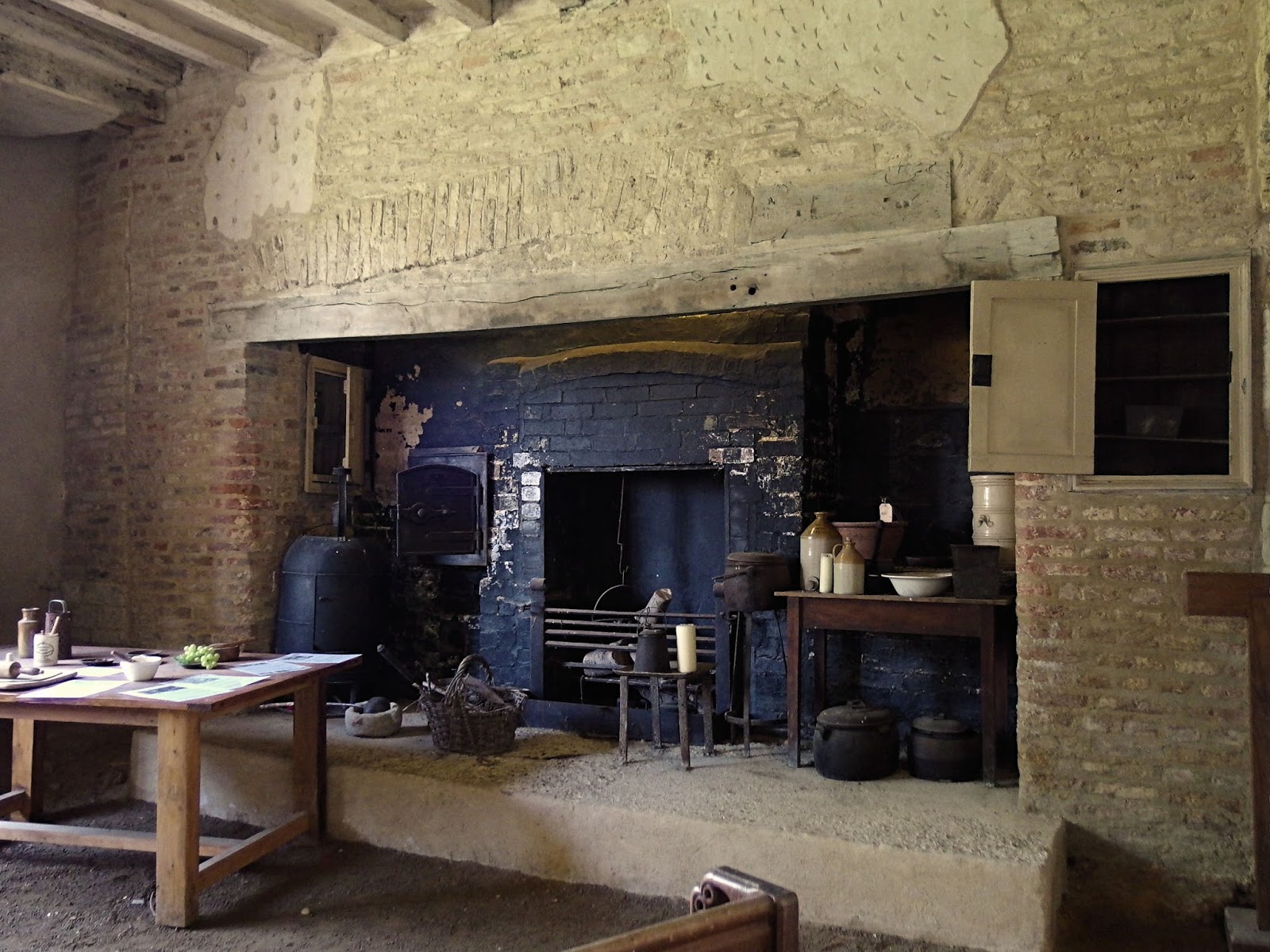 This is the great fireplace from its days as a farmhouse.

Upstairs there was even a device to supply warm water for washing.... 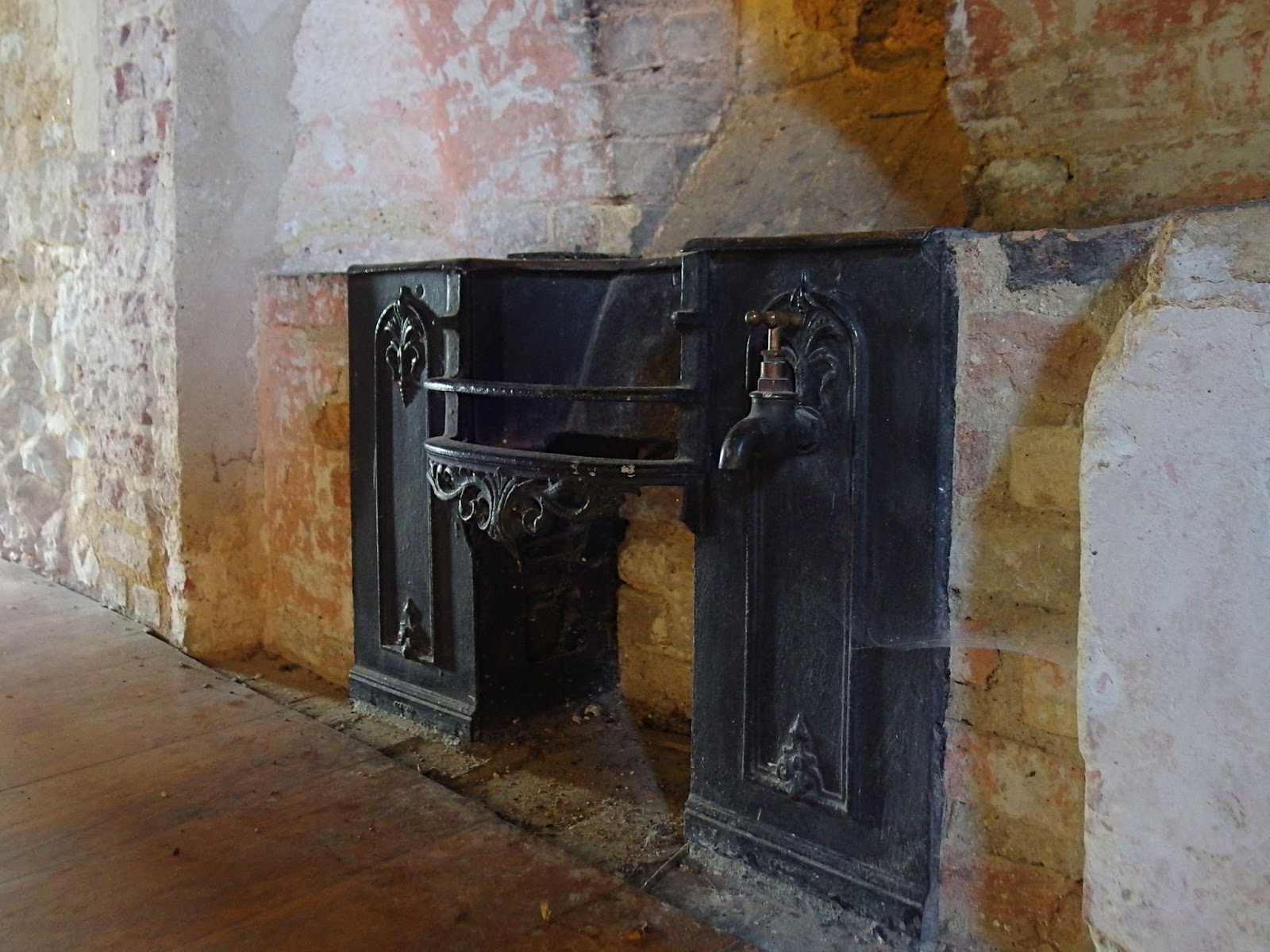 A fragment of old mosaic flooring has been unearthed.... 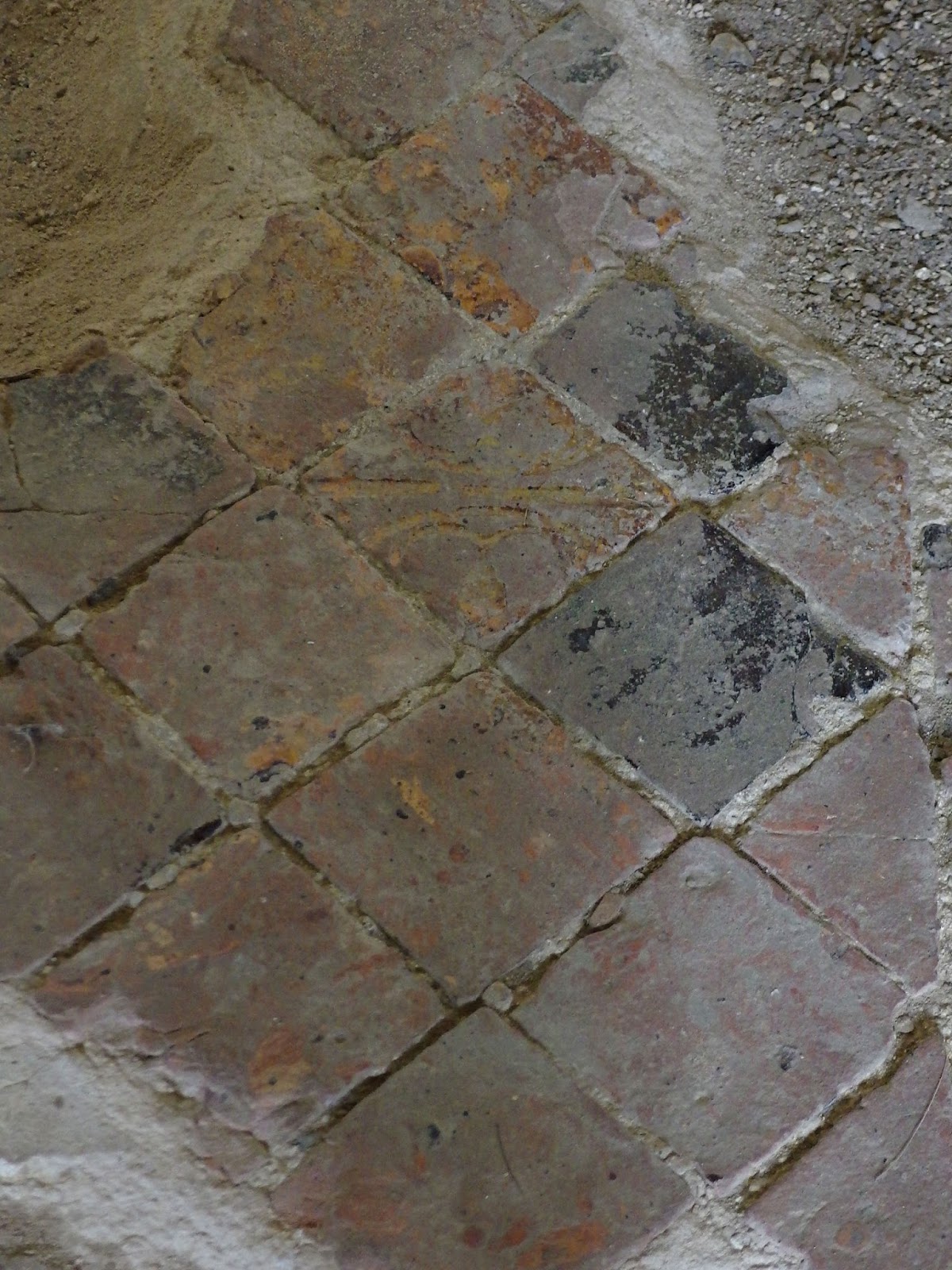 Everywhere there are puzzles to be solved by the architectural sleuth, though there are also information boards to supply the answers to the befuddled. 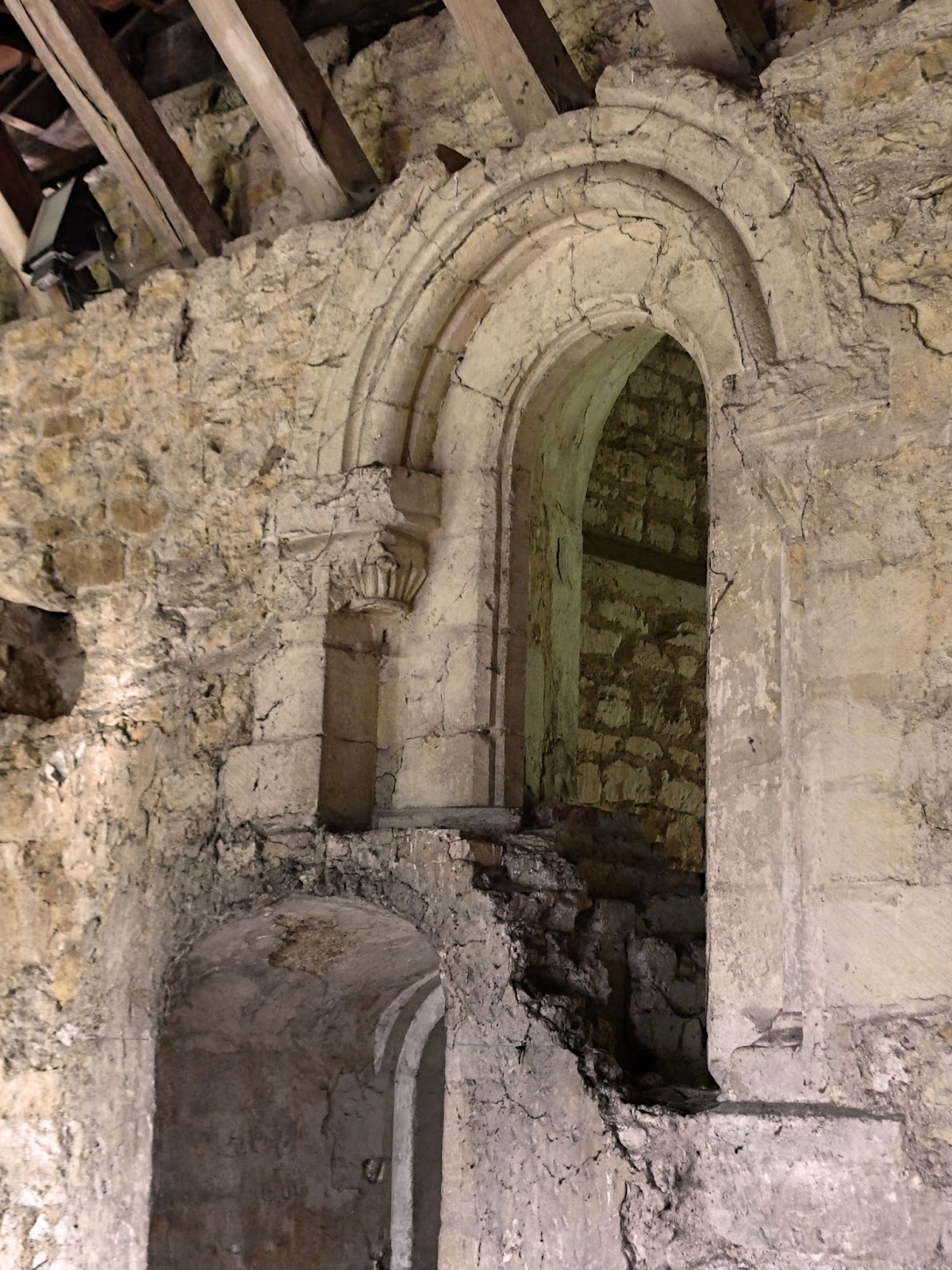 And these two scary chaps lurk in a hidden corner to surprise the unwary visitor. They are of course wax models, which seems to suggest that English Heritage might one day be going to present a more conventional tourist attraction. 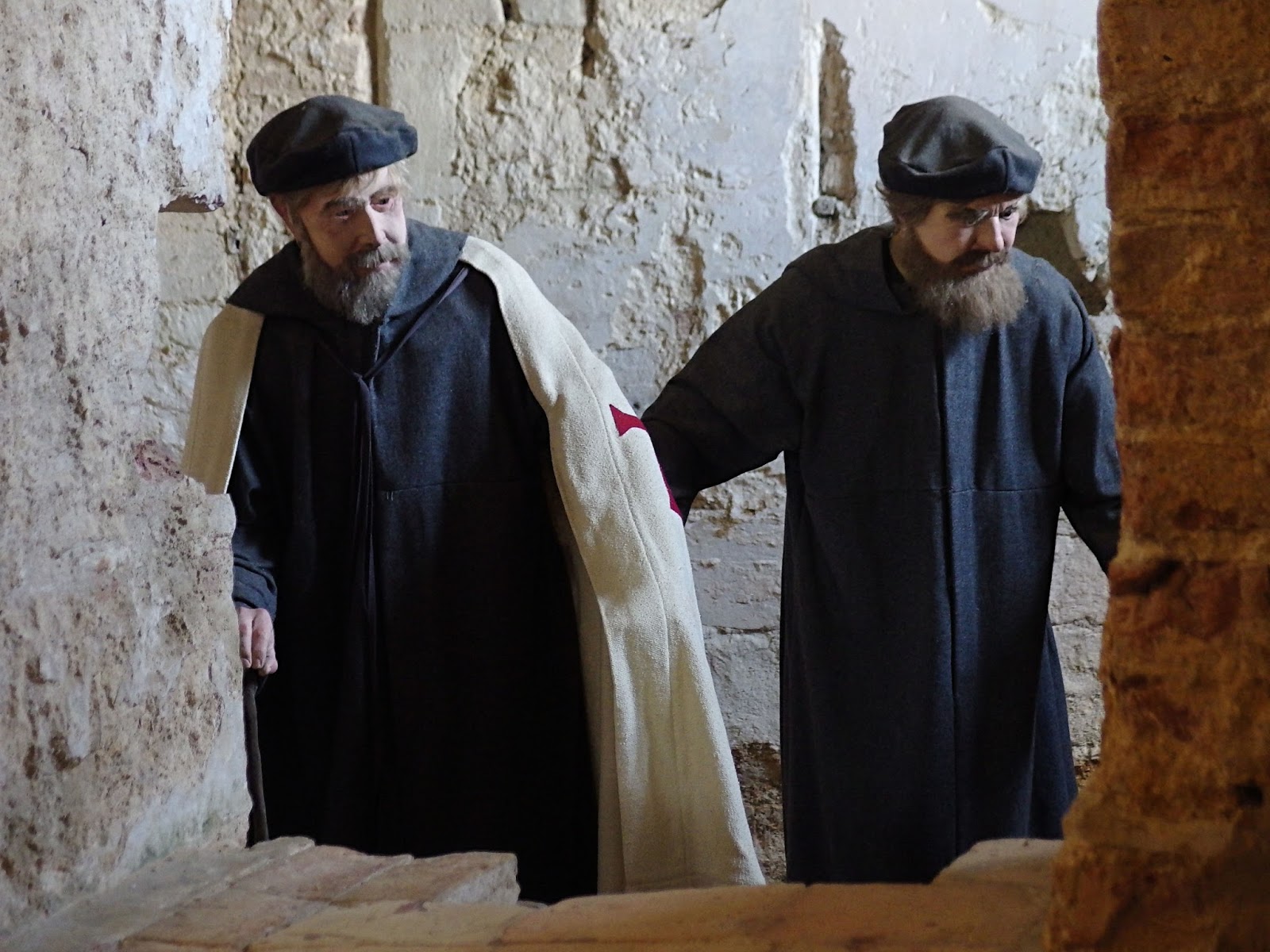 Nearby a building which has long been used as a barn turns out to be the nuns' refectory. This is how it looks now..... 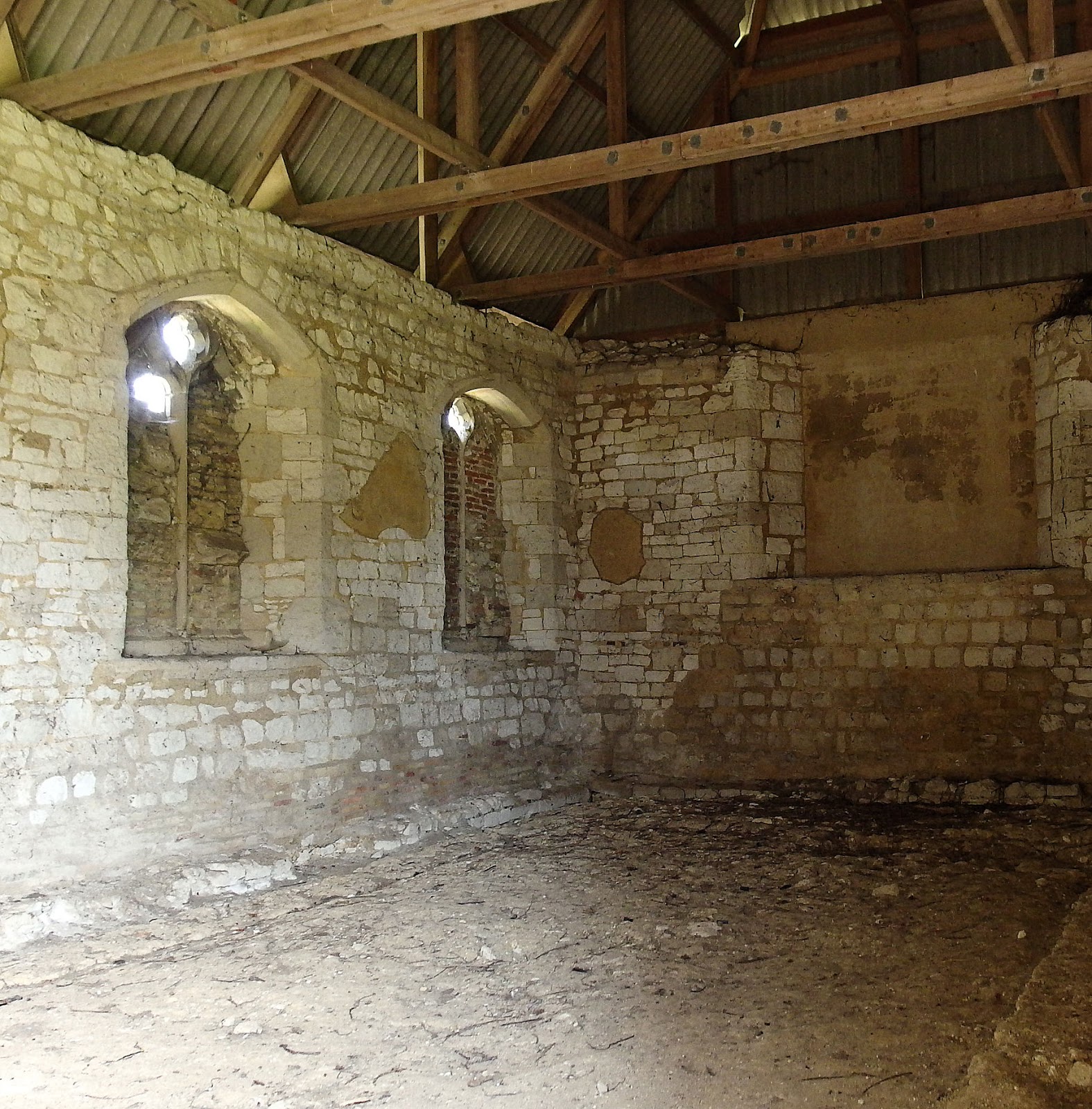 And here's an artist's impression of how it might have appeared in its heyday.... 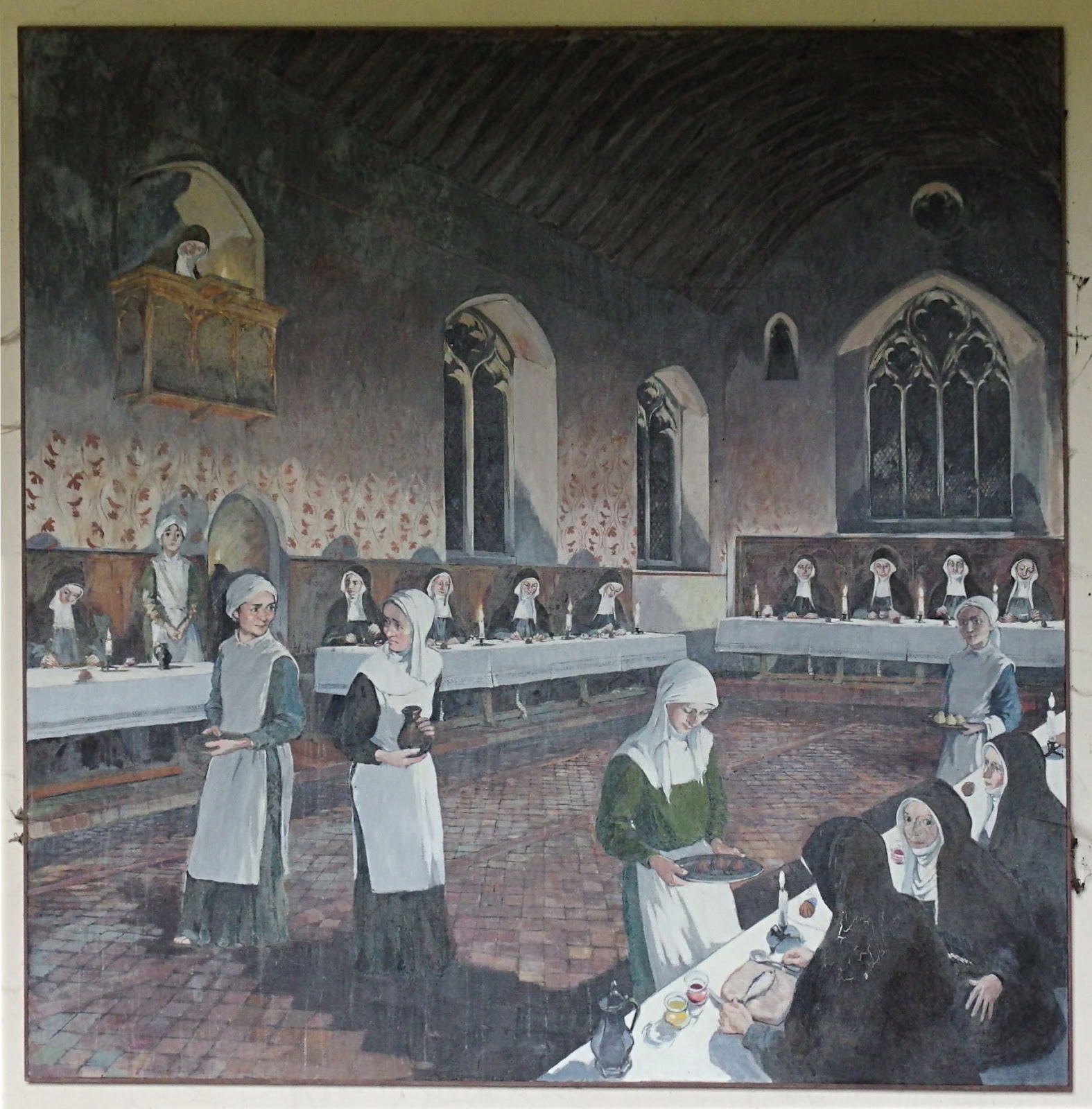 I really don't know what the long-term plans are for these fine old buildings. I rather hope that they don't go down the route of complete restoration with a tourism-friendly make-over. I enjoyed seeing the unadorned bones of the structure revealing its intricate history but leaving the imagination free to fill in the details. It seems to me to be a superb educational resource just as it is.

Posted by John "By Stargoose And Hanglands" at 16:30