Artistic For The People 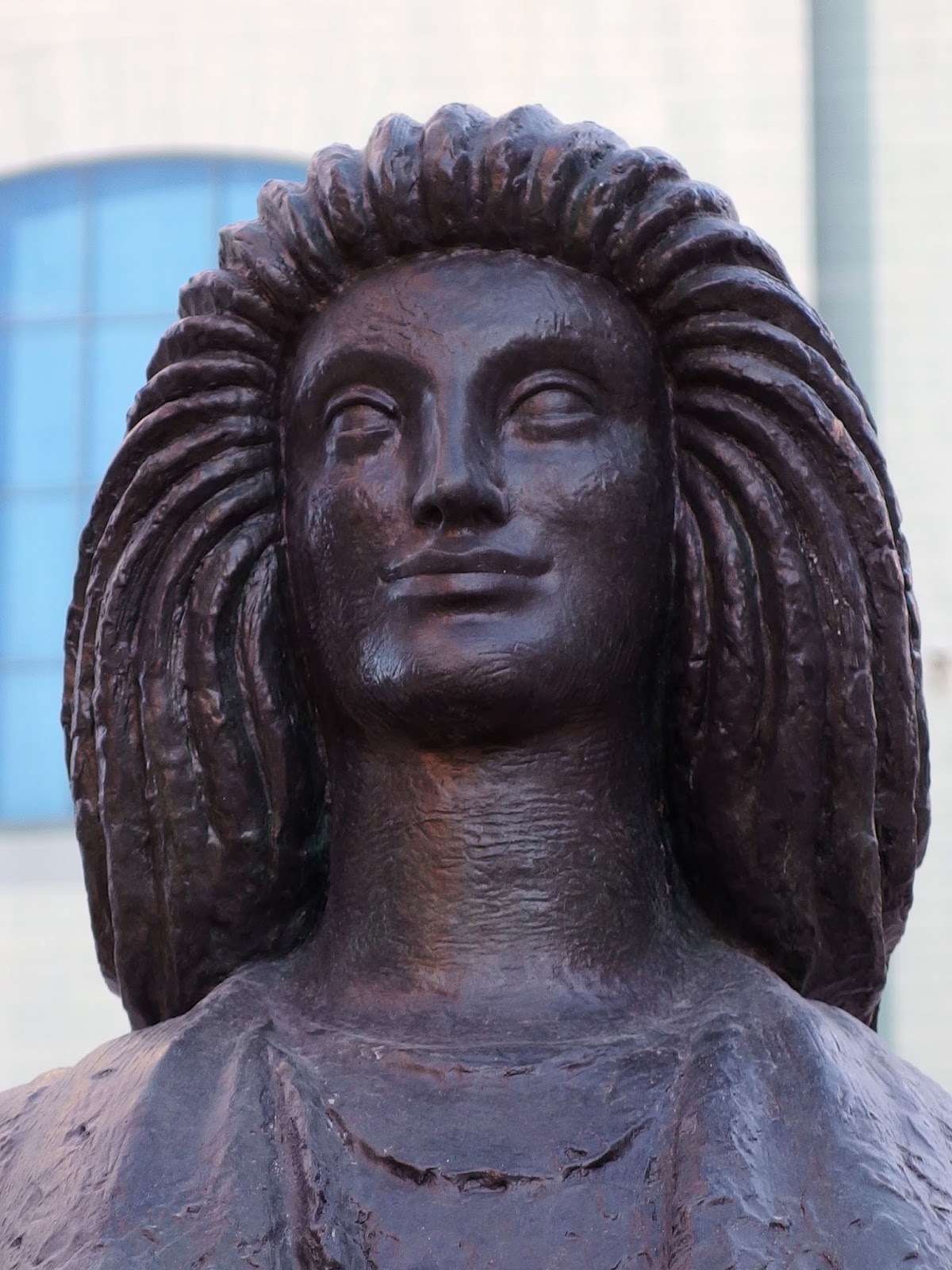 Meet 'Ceres', the ancient Greek goddess of agriculture and fertility, from whom we get the English word 'cereal'. She stood outside Foster's Flour Mill in Cambridge - or so I'm told, though somehow I never noticed in all the many times I must have walked past! Then when the area began to be redeveloped she disappeared and I didn't notice that either. How that happened I can't imagine - I mean, she's big enough!

She's been away for a face-lift and now she's back. That I did notice. Old photos show her standing on a sphere which is what the original commission called for, but now she seems to be standing in a brick box which looks ridiculous. The redevelopment of the area is still taking place so maybe this is not yet the finished item. 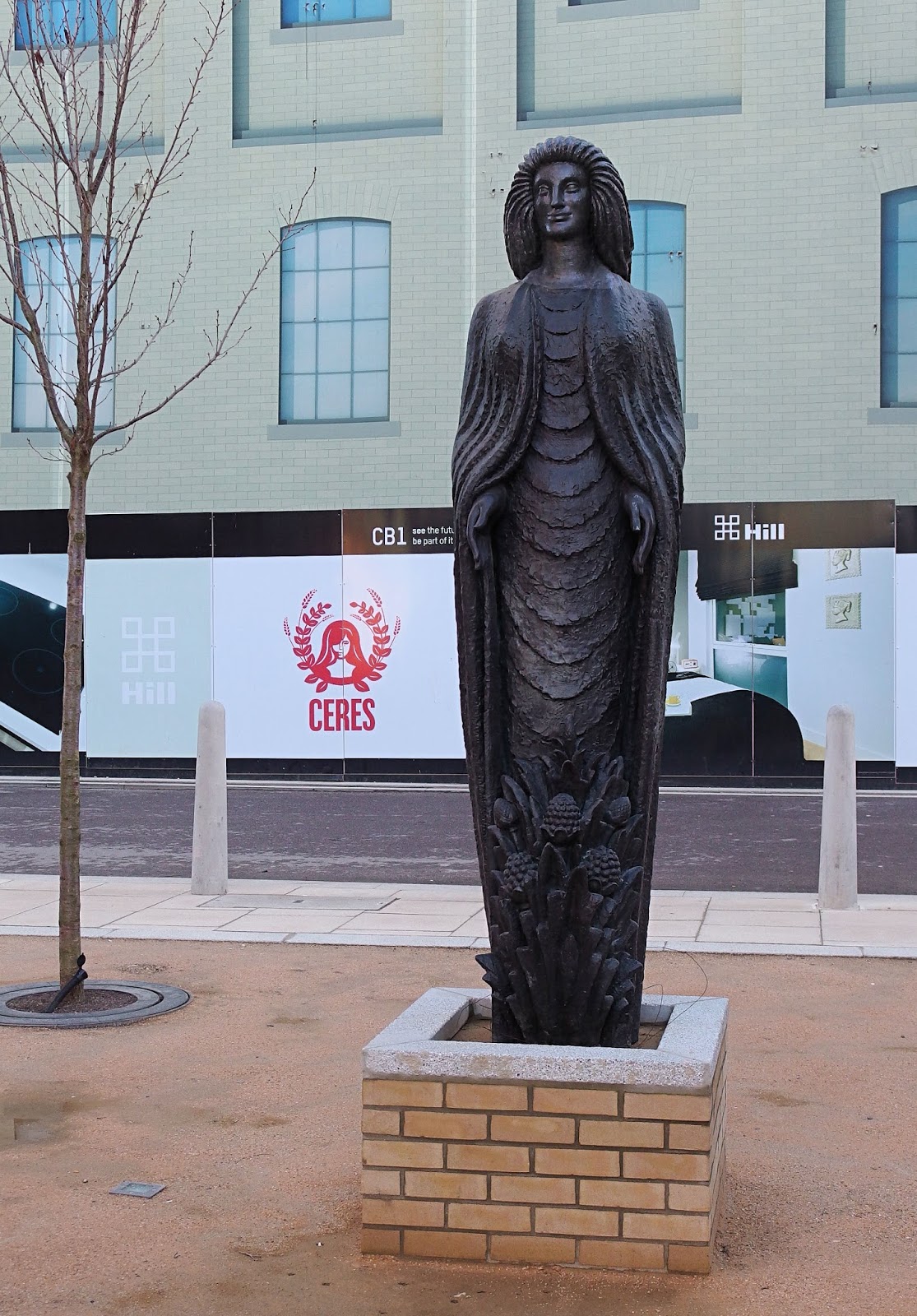 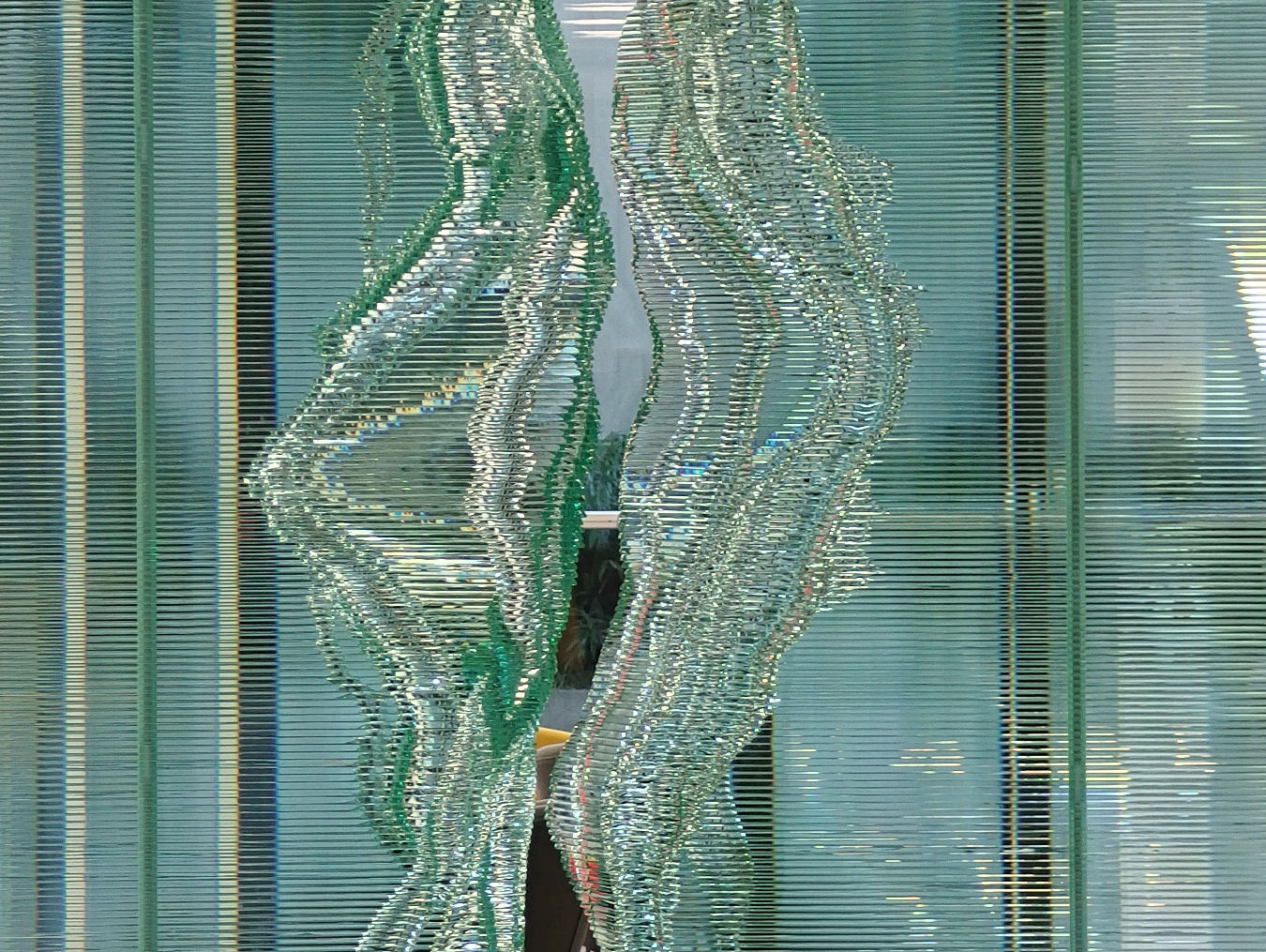 I was wandering along minding my own business when something bright and reflective made me turn to look into the entrance to a modern building. After I'd walked by on about a dozen separate occasions I plucked up courage to go in and ask if I could take a photograph. "Yes, of course you can", said the man behind the desk and he also told me that the artist was Danny Lane and I should Google him - which was odd as the building was Microsoft Research. 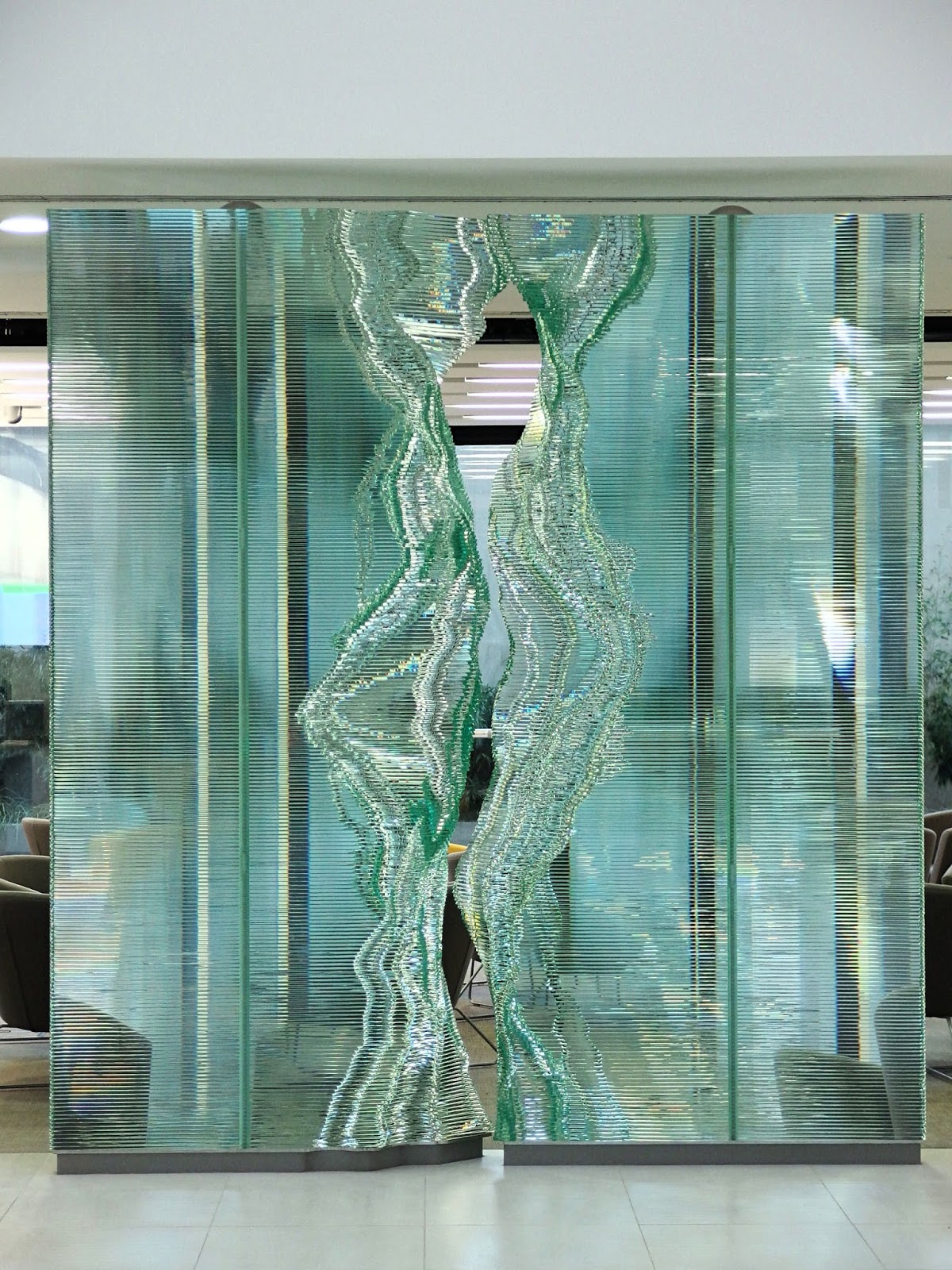 The artist works with unlikely materials including iron girders or, in this case, large sheets of glass. Like the man said it's worth Googling Danny Lane. And there's a wonderful time-lapse video here of '2 of One' being constructed. 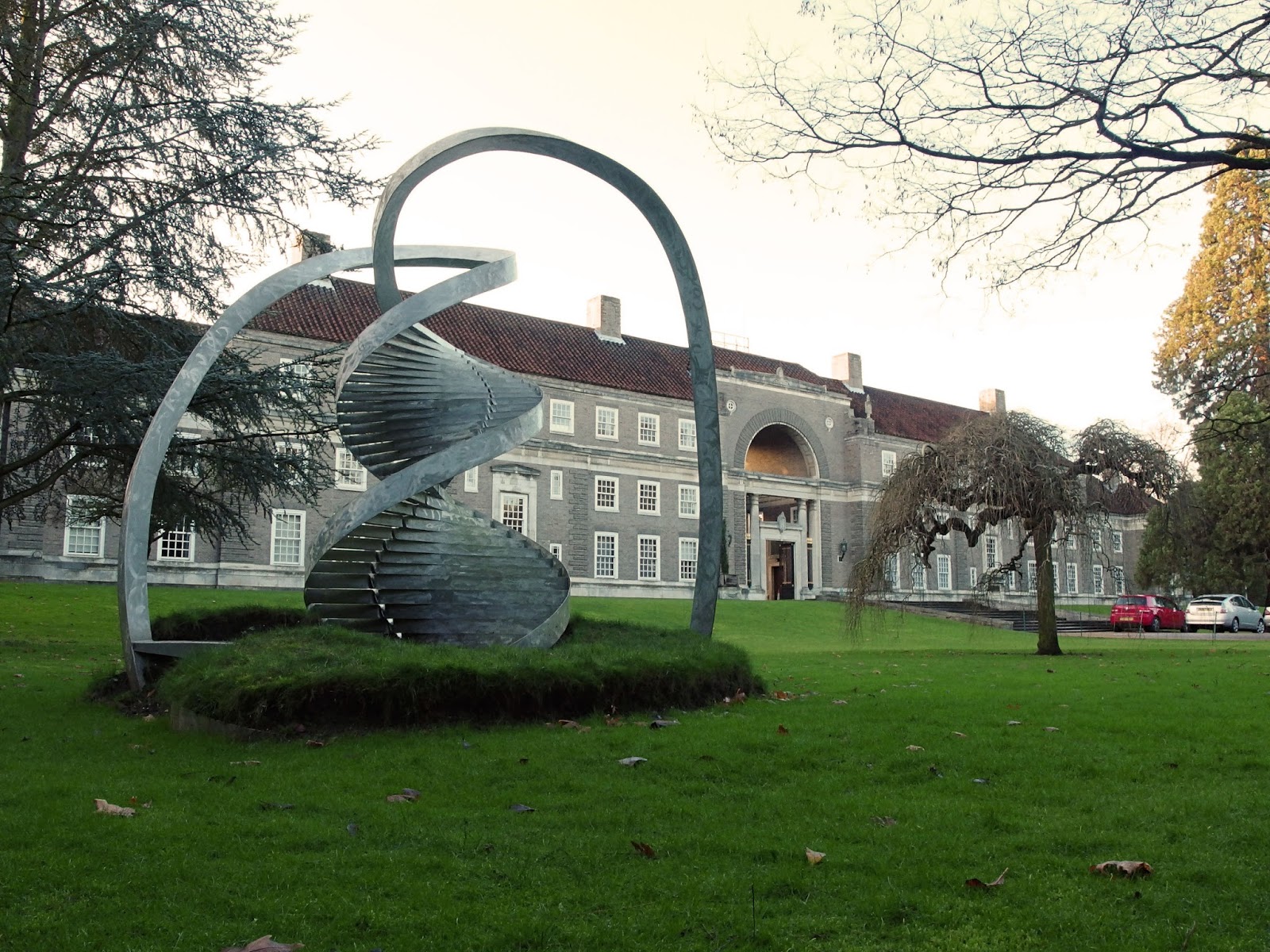 This sculpture in Clare College celebrates the discovery of the molecular structure of DNA by Crick, Watson, Wilkins and Franklin in 1953. The sculpture, by Charles Jencks, was donated to the college by Professor James Watson, who was a student at Clare, and must be one of the few instances where someone has paid for a monument to celebrate their own achievement! 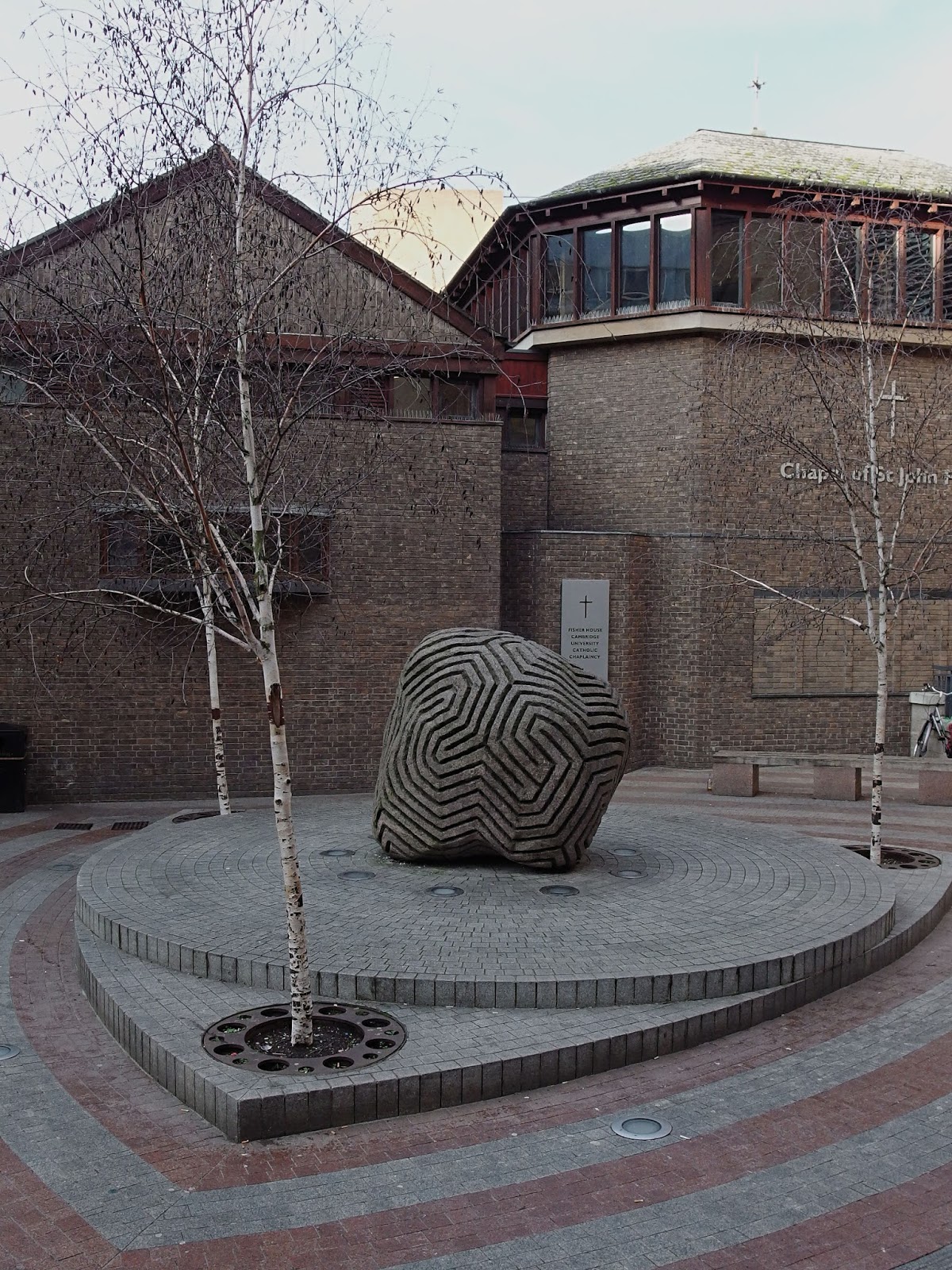 This huge incised granite boulder stands next to a modern shopping development in Cambridge and is by Peter Randall-Page. For a long time the shot above was the best I could manage. I'd tried taking photos in the evening, when the sculpture was illuminated by lights set in the ground, but that didn't seem to work either. Then the other day I noticed something different about the piece, something so ordinary but which made the boulder look so different - one of the bulbs lighting the scene had blown and there was also a light drizzle falling. Somehow it makes all the difference... 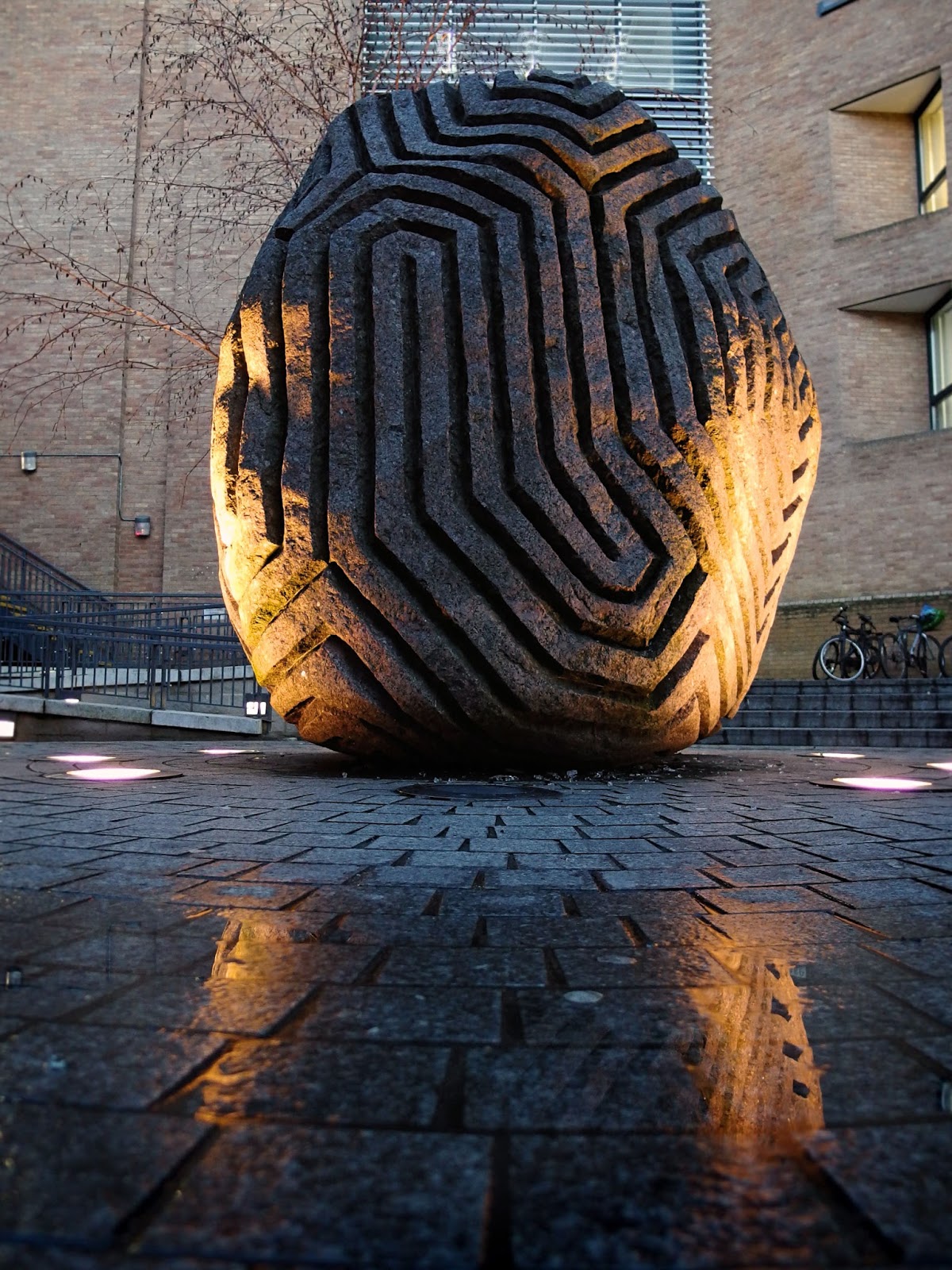 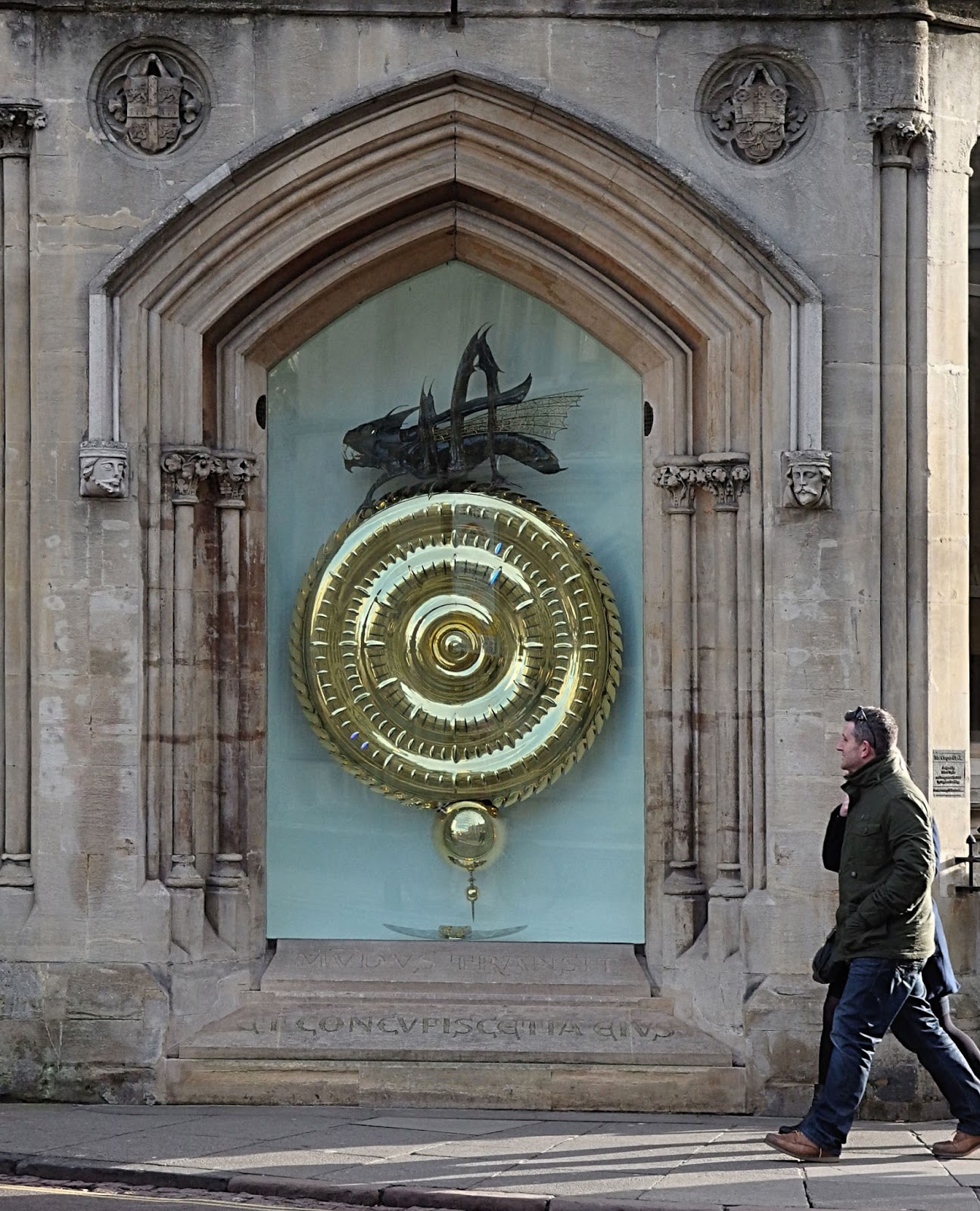 ...or the Corpus Christi clock.

Again there are problems in photographing the thing but in this case it's only finding a time when it's not completely surrounded by tourists ogling it. It's a sculpture rather than a timepiece as we shall see. On top (and a part of the mechanism) is what's usually described as a grasshopper which moves and appears to be voraciously devouring the seconds as they tick by - so surely it's a locust, isn't it? From time to time it blinks as if in appreciation of it's meal.

Time does not pass evenly on this curious clock; if you watch the pendulum it seems to be speeding up, slowing down and sticking. Well, time seems to do that, doesn't it? So the clock is only absolutely accurate once every 5 minutes.

The time is displayed not by hands but by LED lights which shine through slots in the clock face - you can just about see them in the photo. The whole thing was conceived and funded by John Taylor who calls it "Chronophage" which translates as "time-eater", everyone else in Cambridge calls it "The Corpus Christi clock", Except for students at Corpus Christi college who have dubbed it "Rosalind".

The clock should run accurately for at least 200 years, though in practice it stopped several times in the first month! 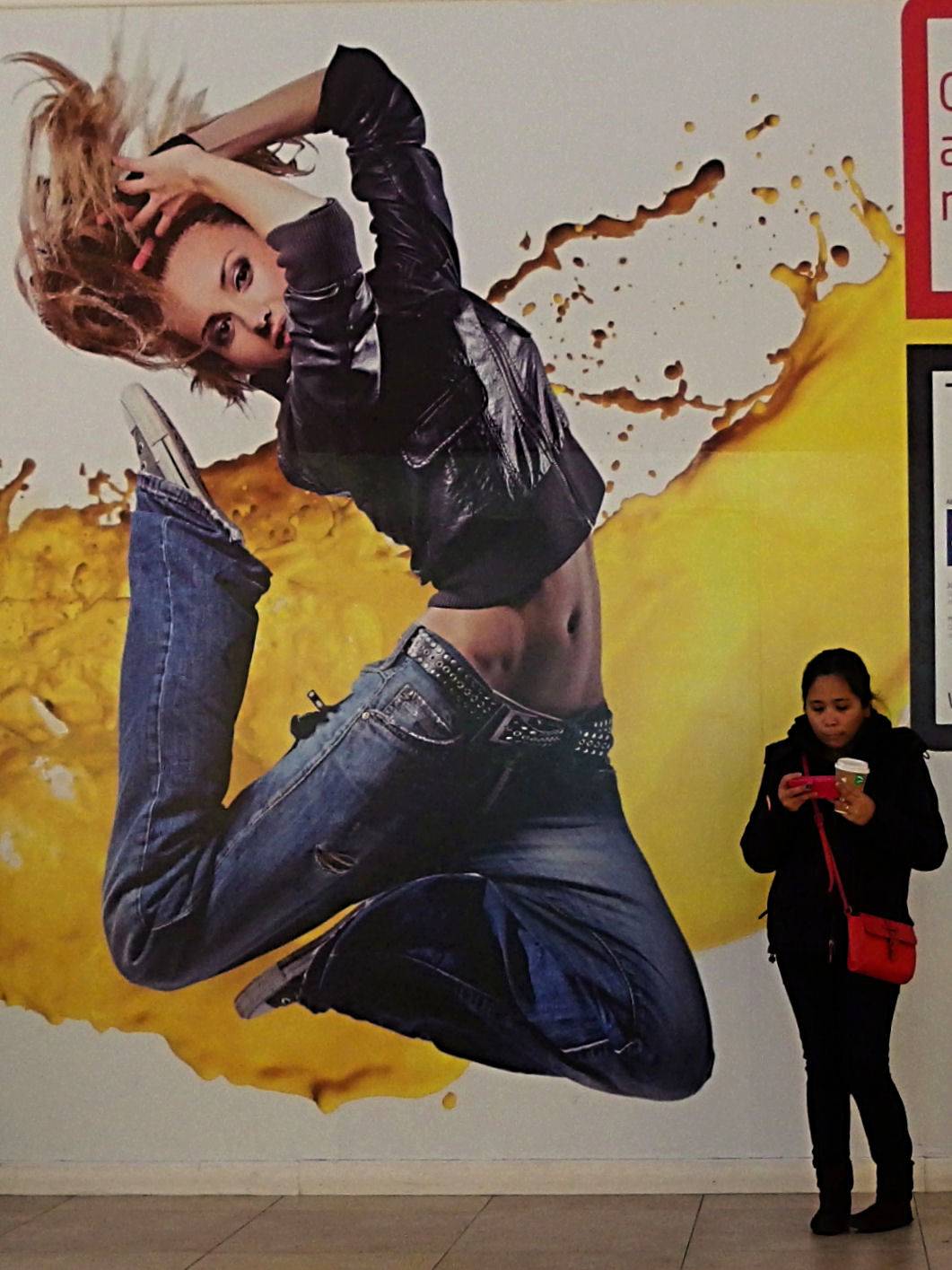 Just a photo of part of an advertising hoarding and a passer by. Call it "Woman Meets Superwoman", if you like!


Take care.
Posted by John "By Stargoose And Hanglands" at 19:20