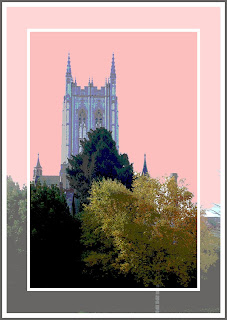 Lets start with what we know about St Edmund. Virtually nothing. There are no contemporary accounts of his life. Everything we know about him was made up years after his death.

He was born, it's said, in about 841 AD, the son of King Aethelweard, about whom we know even less. At the age of 14 Edmund succeeded his father as King of East Anglia. In 869 AD Britain was invaded by the Great Heathen Army of the Danes. Edmund refused to renounce Christianity and was put to death on the orders of one Ivar the Boneless.

What you really want to know now - what I really want to know too - is how Ivar got his nickname. He was known to have been a berserker, a group of warriors who got themselves into a trance with the aid of hallucinogens, before they went into battle. But no one knows for sure why he was described as "boneless", though you can be sure that there's been plenty of speculation!

Just to make sure that Edmund learned his lesson he was beaten, shot full of arrows and then beheaded. The head was thrown into the forest but his followers found the head with help from a wolf that could talk. Not only that but it spoke Latin! "Hic, hic, hic!" it cried. ("Here, here, here!") 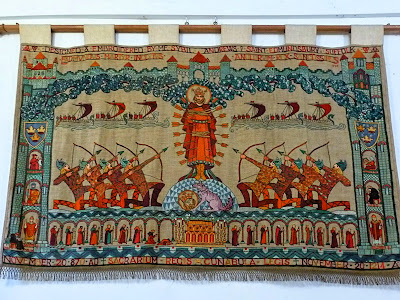 Despite his unhappy end and unlikely story he became a cult figure after his death and pilgrimages were made to his visit his shrine. By the tenth century a household of Benedictine monks had been founded and a church built on the site by King Canute, no less. By the medieval period St Edmund was widely regarded as being the patron saint of England. The abbey, as it now was, became the most important, and the richest, pilgrimage site in the country. A huge abbey church was built. A model shows how grand it was... 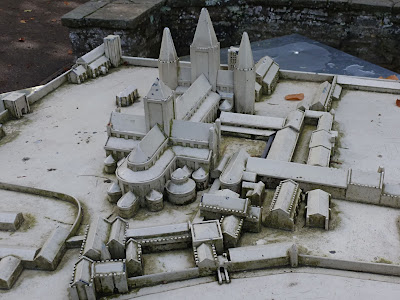 ....but gives no idea of its size. The county's largest parish church, the huge wool church at Lavenham (which you can see here), would have fitted in four times over with room to spare. Now little remains. 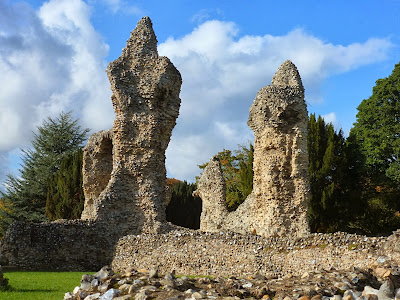 By the time Henry VIII dissolved the monasteries in 1539 the monks owned much of Suffolk and had become very wealthy indeed. But, during the two hundred years before that, the monks had become corrupt and extremely unpopular. Monks were killed and buildings were damaged  in riots by the townspeople. In 1327 the Abbey Gate was destroyed and had to be rebuilt. 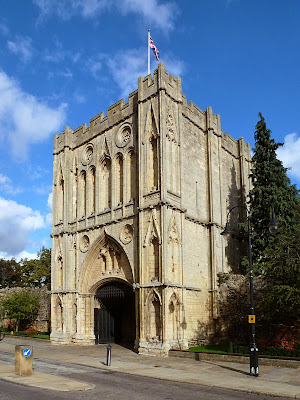 The Abbey Gate led into a huge courtyard surrounded by grand buildings. Today it survives as Abbey Gardens, a well-maintained public space. 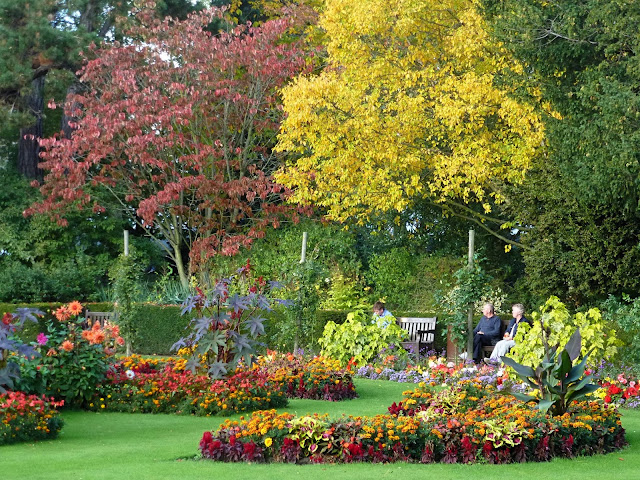 You can wander among the flowers or explore the ruins at your leisure, and all without charge. These huge rubble cores are impressive, though nearly all the best building stone has been plundered for later building work. Just tantalising glimpses remain to give some idea of its former grandeur. If you look high up on that tower of rubble you'll see a small remnant of finished stone giving the suggestion of the base of an arch. No need to strain your eyes; I'll help you out... 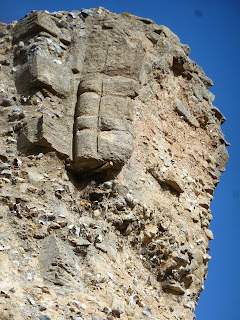 But behind the ruin you can't help but notice a soaring church tower... 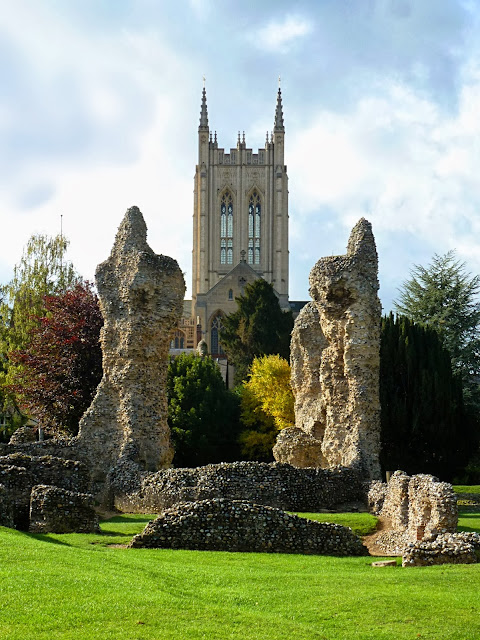 But that church tower is not all it seems as we shall discover. There's been a church on the site since at least 1065 - but not this one. It was started in 1503 but much altered in the Victorian era. 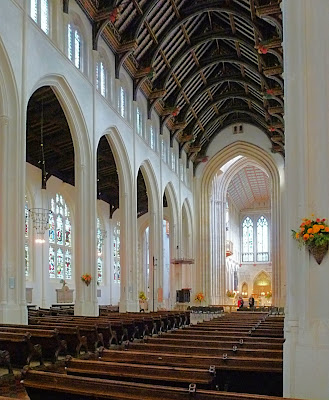 There's a rather elaborate font designed by George Gilbert Scott in 1870, though the cover and the decoration was added later. 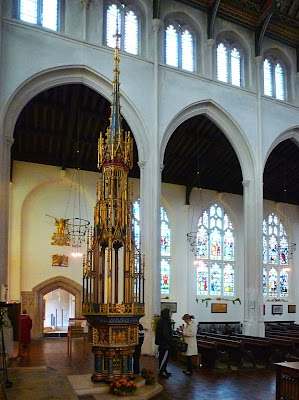 In 1914 the church became a cathedral for the new diocese of Ipswich and St Edmundsbury. (Don't ask me why Bury St Edmunds suddenly becomes St Edmundsbury.)  It was decided that cathedral status demanded more building; transepts, a tower, that sort of thing. From 1943 to 1988 Simon Dykes Bower was the architect. He was a controversial figure in that he championed the Gothic revival, which had become deeply unfashionable since its heyday in the Victorian era. However it allowed continuity of style with earlier work. 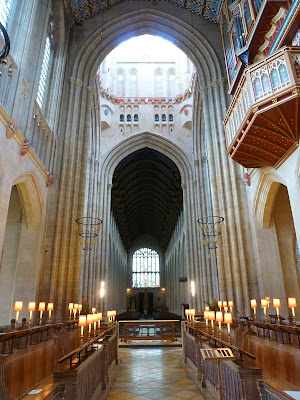 But the tower, yes the one we saw earlier from the ruins, was not built until this century (between 2000 and 2005. There's some wonderful decorating - painting and gold leaf - which, being brand spanking new, is rather bright and colourful. 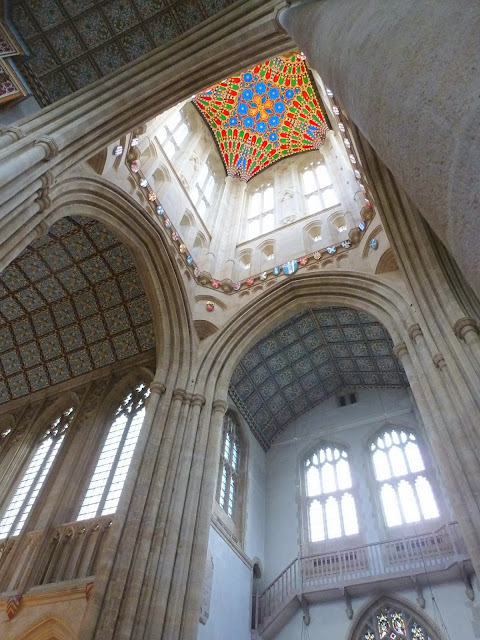 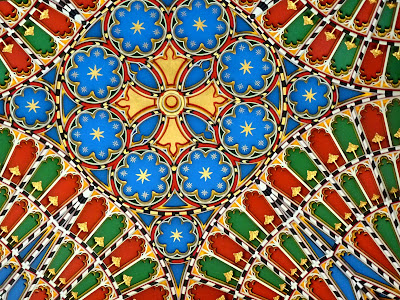 The organ's a bit special too... 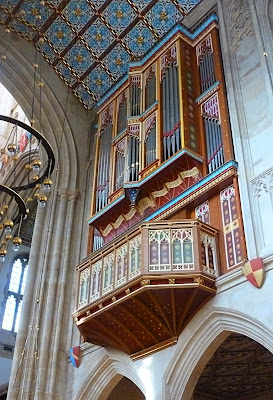 So we CAN still build these things! All it takes is time and money.

I'm going to have a cup of tea and a piece of cake in the Cathedral refectory (which won't take much money at all), then I'm going outside to take another look at that tower. 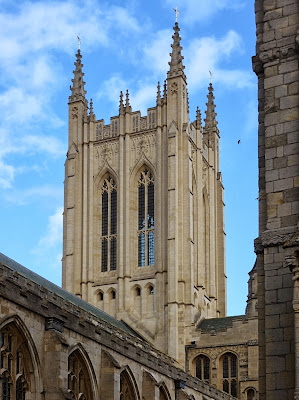