In the 17th century John Layer described it as "a very hanesome faire large church" and it's still a very hanesome building today. Like almost all churches it's been added to, altered and refurbished over the years including a very extensive renovation in the 19th century. But like every other church it has its own story to tell. 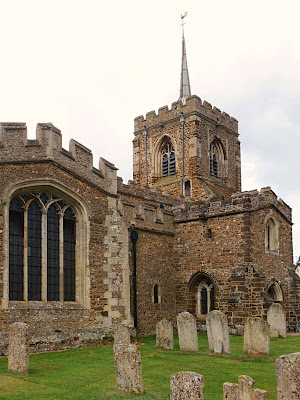 The first thing that you notice if, like me, you've approached from the Cambridgeshire side is that it's a different colour from all the other churches you've passed on your way. Most village churches to the east of here are built of flint, clunch or occasionally brick. Often the building material is hidden beneath a layer of plaster. Here it's a coarse reddish sandstone that's been used. It's a stone which is quarried locally for we are on the edge of the Greensand ridge. Look at the stone used in the porch, they are really quite massive blocks of stone. 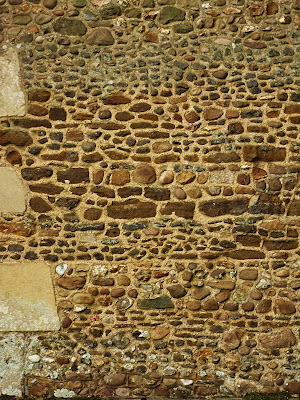 If you've ever wondered how they went about building church walls in the past then I think you can see the evidence in the wall above. Once the foundations had been constructed in a trench then shuttering was put in place and a few feet of wall was constructed by placing stones between the shutters and then pouring in lime mortar. When that had set the shuttering was raised higher and a new section of wall was built. You can see the various levels in the photo above. The huge stones on the left are the quoins which formed the corner. 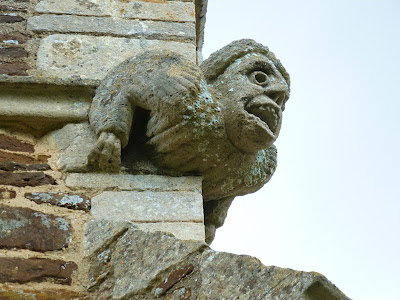 Look up to see the gargoyles which formed water spouts to throw the rain water clear of the building. These imps and devils were only to be found outside the church - the inside was reserved for the angels. 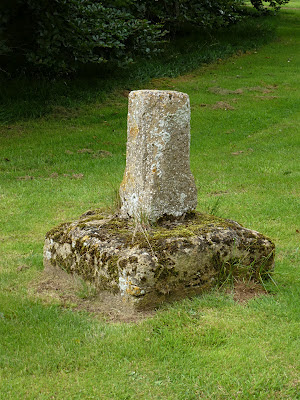 One "old devil" who visited all the churches in the area, inside and outside, was William Dowsing who, in 1643 in the spirit of the age, went around smashing anything which he thought was "idolatrous". In Gamlingay this included the old preaching cross which stood in the churchyard, some of which pre-date the building of churches. Just the stump of the cross survives. 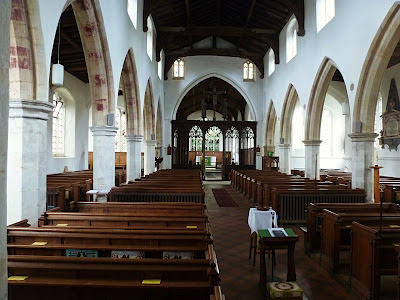 Inside we find a rather plain but nonetheless impressive interior. Longtime Stargoosers might have already noticed something which is guaranteed to get old John excited! 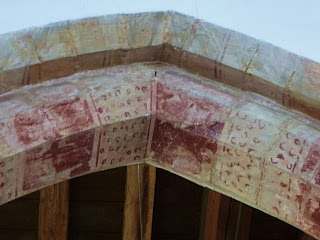 Yes, a little bit of the medieval painted decoration has survived. How splendid our religious buildings must have looked when they were completely covered with such painting. You can also see if you look closely at the the picture of the interior something which has caused much debate among historians. The nave of the church does not exactly line up with the orientation of the chancel lying beyond the rood screen.


Now in order to understand the significance of this (if indeed it is significant) you have to appreciate that the body of the church (the nave) was supposed to represent the body of Christ. Many churches, this one included, have transepts to left and right representing the arms of the cross so that the plan of the church is indeed cross-shaped. The odd alignment of the chancel therefore echoes Christ's head hanging to the right upon the cross. It seems to me to happen too often to just be carelessness on the part of the builders. 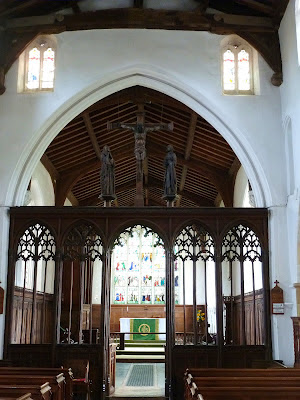 The rood screen, like many others in village churches, has a complicated history as church practices changed over the centuries. Originally the chancel was completely screened off from the main part of the church and sometimes, as here at Gamlingay, a squint-hole exists between the two so that services could be co-ordinated. Over the years the rood-screen has taken on a more symbolic role.
Oh, and see those two little windows high up above the rood screen.... 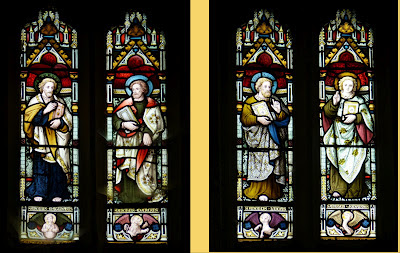 ....they contain stained glass representations of the Gospel writers, Matthew, Mark, Luke and John. The openings are older but the glass probably dates from the 1890s. 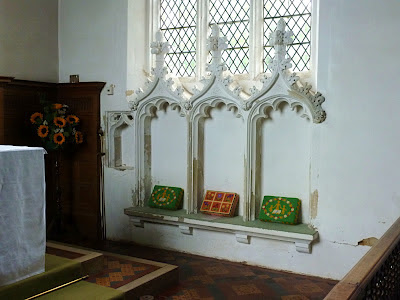 The rather beautiful sedilia may date from the 15th century though they are remarkably well preserved if this is the case. Also in the chancel is this sad memorial... 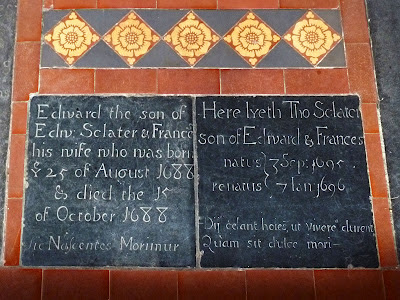 In the side chapel in one of the transepts stand the oldest pews in the church and also in the wall can be seen a small recess with sockets for a grill. It is thought that it once contained a relic of some kind. 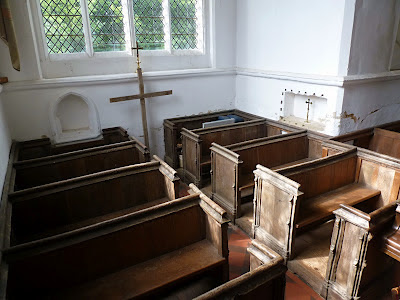 As we go out through the porch take a look at the benches on either side of the entrance... 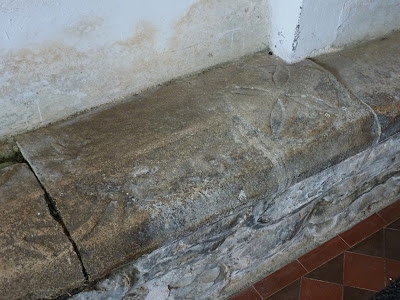 ...a case of religious recycling for these are old stone coffin lids found in the churchyard. 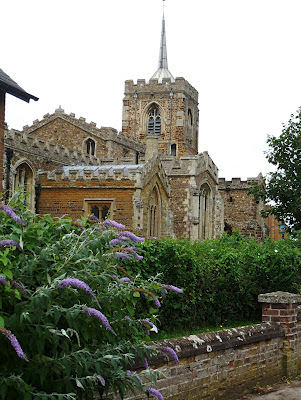 Posted by John "By Stargoose And Hanglands" at 12:30